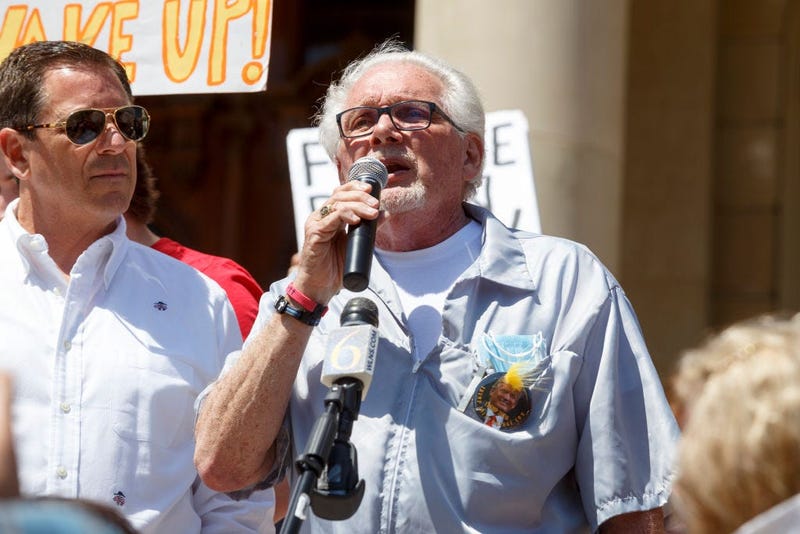 Photo credit Owosso barber, Karl Manke, gives a speech before cutting hair for free on the steps of the state Capitol during Operation Haircut on May 20, 2020 in Lansing, Michigan. The event was a protest planned by the Michigan Conservative Coalition in response to an Owosso barber, Karl Manke, whose business license was taken away after he violated the stay-at-home order by reopening. (Photo by Elaine Cromie/Getty Images)
By WWJ News WWJ Newsradio 950

(WWJ/AP) The state is reinstating the licenses of the Owosso barber who reopened his shop during the COVID-19 shutdown.

The order, along with a recent Michigan Supreme Court ruling in his favor, affirmed Karl Manke his right to continue cutting hair.

Manke said he was a little afraid what would happen when he reopened his shop back on May 4, but he just had to do it. “I’d gone six weeks without a paycheck with no money coming in. I’ve been in this business 59 years...I’m 77; I’ve always worked,” Manke told reporters.

The sentiment was echoed by Erik Kiilunen of  “All Business is Essential," which has been campaigning on behalf of Manke and all business owners who were forced under threat of prosecution by the governor to put their lives on hold during the pandemic.

“I’ve said it before and I’ll say it again; Karl is what a true American hero looks like,” said Kiilunen, in a media release.

Kiilunen, an Upper Peninsula businessman, was behind a billboard campaign that urged all Michigan business owners to reopen in May, regardless of what Whitmer had to say.

“Karl never should have had his license taken away by the corrupt state in the first place,"  Kiilunen said. "Good people need to stand fast against the corrupt politicians in Lansing. We don’t need their permission to live. They need our permission to act. It is time we reasserted ourselves and put our foot on the neck of corrupt overreaching government.”

The order closing barbershops, salons and other personal care businesses — one of dozens of executive orders designed to slow to spread of the coronavirus — was lifted as of this Monday.

While her political rivals maintain she went to far, Whitmer on Wednesday pointed to analysis she says show her orders put Michigan on track to contain the virus, saving potentially thousands of lives.