(WWJ) Keep up that social distancing, the governor says, because it's doing the job it's meant to do.

Pointing to an array of charts and graphs at a news conference Wednesday, Gov. Gretchen Whitmer said Michigan and New York are the only two states in the U.S. that are "currently on track to contain COVID-19."

"The data shows very few states dropped their infection rate as low as Michigan," Whitmer said, asserting that cases are spiking in other states that opened up too quickly and "didn't take the aggressive actions that we took." 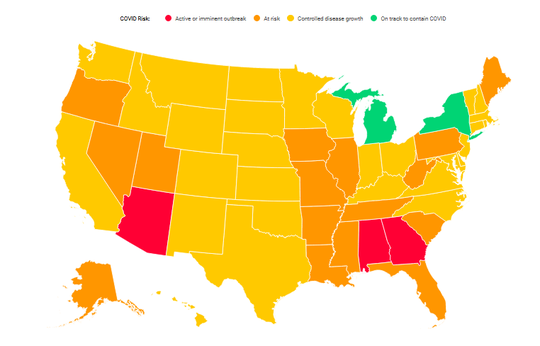 But that doesn't mean it's time to get complacent, she stressed.

"This is good news, but as you have heard me say many times in the past and you will hear be say it many times in the future: It is still important to note that this is a novel virus and there is no cure or vaccine for it yet," Whitmer said. "So we have to stay vigilant, and we've gotta be flexible in order to lower the chance of a second wave and mitigate how serious that second wave is."

"We have seen what happens when people don't take this seriously; we see exponential growth happening again," Whitmer said.

On Wednesday, the Michigan Department of Health and Human Service reported 204 new confirmed cases of COVID-19, and 2 new deaths, which brings the totals to 60,393 cases and 5,792 deaths

The governor noted that recent analysis (see below) found that Michigan would have seen nearly 30,000 additional cases of June 1, if she had not implemented her emergency orders, and she's "proud of the work that we've done."

#Michigan has moved to green on our COVID Warning Dashboard, indicating that they are on track to contain COVID.

Whitmer lashed out at her political rivals, including Republicans in the State Legislature, who say she went too far with some of her orders.

"The data shows our actions working, and yet we still see attempts to take away my authority to take these actions which made it all possible in the first place," Whitmer said.

"I want to be very clear," she said. "Any attempt to strip away the powers of the governor during this crisis is irresponsible, dangerous and foolish. We're here today in Phase 4 of the MI Safe Start plan, heading toward Phase 5 and leading the country because of the action we took. Millions of Michiganders have done their part as well."

"Let's keep up the good work. Let's stay safe, be smart, and remember to wear your mask," Whitmer said, continuing to stress mask-wearing while in public.

"Masks should not be political," she said. "They are designed to save our lives."

While she said Michigan isn't quite ready to move into Phase 5 of her reopening plan, she expects to do so by the Fourth of July. "It's gonna take everyone's continued efforts to get it done though," she said.

Looking further down the road, Whitmer addressed another topic on many minds: What about schools?

The governor said she anticipates that K-12 school buildings will be able to reopen for in-person learning in the fall  — with strict safety measures in place.

“The most important thing we can do when developing a return to school plan is closely examine the data and remain vigilant in our steps to fight this virus,” said MDHHS Chief Medical Executive Dr. Joneigh Khaldun, “I will continue to work closely with Governor Whitmer and the Return to Learn Advisory Council to ensure we continue to put the health and safety of our students and educators first. This is a big step, and we will remain flexible to protect everyone who steps foot in a Michigan school.”

Whitmer said to expect details on the council's plan for schools on June 30.

MORE: Whitmer Has Detailed Plan For Reopening Mich. Schools In The Fall