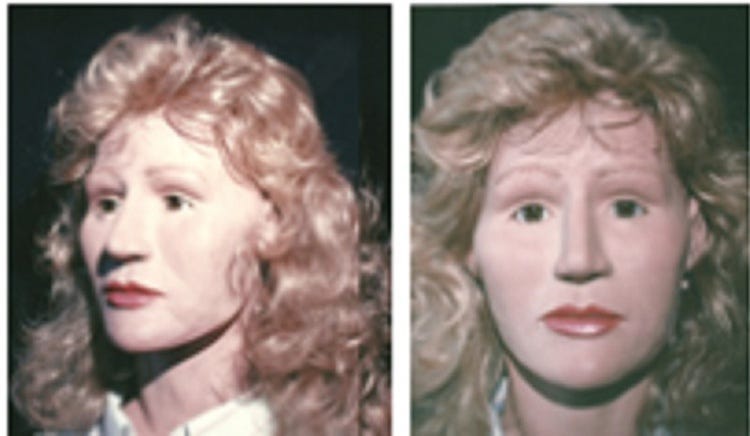 Photo credit Images depict what it was believed the person may have looked like based on forensic evidence and facial reconstruction. (Photos: Michigan State Police)
By WWJ News WWJ Newsradio 950

PAW PAW, Mich. (WWJ/AP) - State police say human remains discovered by a Michigan hunter 31 years ago have been identified as an Oklahoma woman.

First Lieutenant Chuck Christensen told WOOD-TV that the identity was made by comparing a femur bone with a public genealogy database and interviewing family members. Marcia Bateman of Oklahoma City was 28 years old when she disappeared in 1988.

She was known as "I-196 Jane", according to reports, because she was located near I-196, in Van Buren County's Covert Township, around 200 miles west of Detroit.

Christensen said Bateman was "living on the street a little and somewhat transient.  He gave credit to the DNA Doe Project, which uses forensic genealogy to identify people.

The case is now classified as a death investigation as police work to determine if it was a homicide.

According a Michigan State Police news release: "Marcia was last seen in May 1988. Her family reported her missing in August 1988 to the Oklahoma City Police. Marcia was known to visit family/friends in the Dallas, Texas and Los Angeles, California areas and may have visited these cities prior to going missing. At this point in the investigation, investigators have been unable to determine how she made it to Michigan from Oklahoma."

Anyone with information about Bateman or who can recall any vehicles or anything suspicious in the area her remains were found back in 1988, can call police at 269-657-5551.