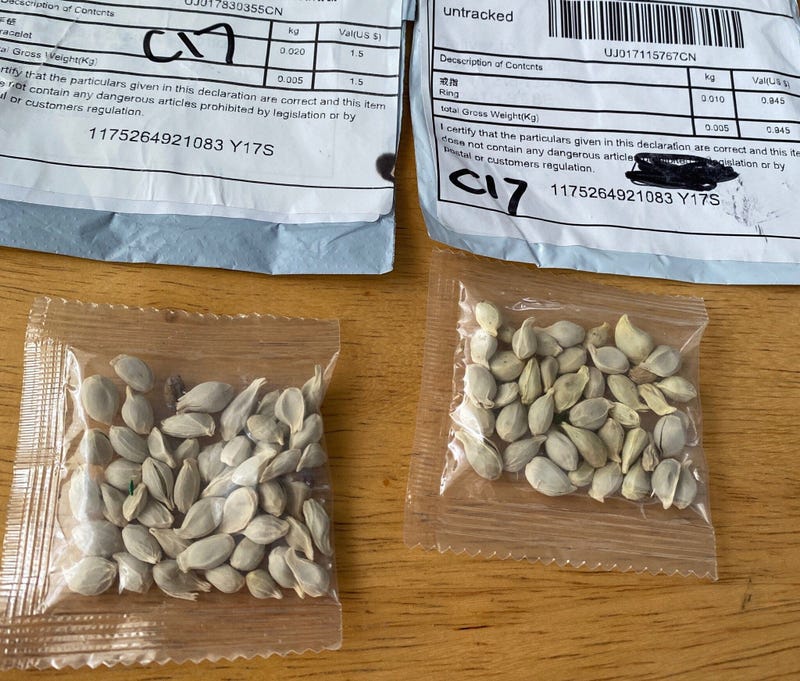 (WWJ) If you get something in the mail from China that you didn't order, do not open it, and don't throw it away.

Those instructions come Monday from officials in Michigan and multiple other states, as authorities investigate a mysterious case involving shipments of seeds.

According to Michigan Department of Agriculture and Rural Development, people across the U.S. have been reporting receiving unsolicited packages containing seeds from China in the mail. The seeds are usually sent in white packages displaying Chinese lettering and the words “China Post.”

Most recipients say they didn't order anything, and that the packaging was labeled as jewelry. Other people have reported ordering seeds on Amazon and receiving these seeds.

Officials are not saying there is anything in the package that could be dangerous to touch or to have in your home, but they say planting them could be harmful.

“If you receive unsolicited seeds from another country, do not plant them. If they are in sealed packaging, do not open the package,” said Mike Philip, director of MDARD’s Pesticide and Plant Pest Management Division. “We don’t know what type of seeds are in the packages, but we do know they come in a variety of sizes and colors, with some reported to be very tiny. These unsolicited seeds could be invasive, introduce diseases to local plants, or be harmful to livestock.”

To be clear, officials are not saying there is anything in the package that could be dangerous to touch or to have in your home, but they do say planting the seeds could be harmful.

“If planted, these unknown and potentially invasive species could have a very negative impact on the environment. Additionally, we’re asking people not to throw the seeds or packages away or dispose of them,” added Philip. “MDARD appreciates the cooperation of Michiganders who receive these packages as we work together to protect Michigan agriculture.”

The packages may be a part of a “brushing” scam, officials say.  In such a scam, a vendor sends out an inexpensive product to an unwitting receiver and then writes positive reviews about the product on the receiver’s behalf, in an attempt to appear legitimate and bolster ratings.

If you receive an unsolicited package of seeds from China, hold on to the seeds, packaging and mailing label, and contact MDARD’s Customer Service Center, Monday-Friday, 8 a.m. – 5 p.m., at 800-292-3939 or send an email to MDA-Info@michigan.gov.