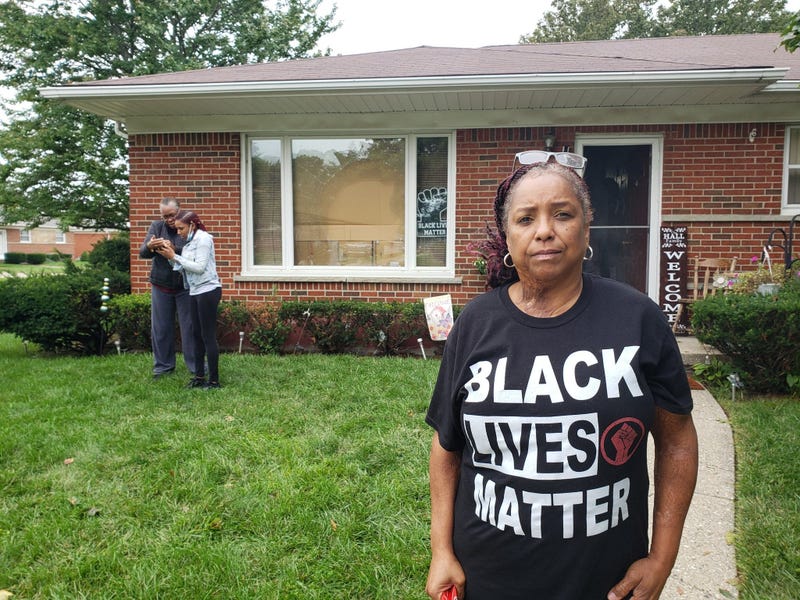 Photo credit Candace Hall is seen outside her Warren home, which was vandalized in an alleged hate crime. (Photo: Jon Hewett/WWJ)
By WWJ News WWJ Newsradio 950

(WWJ) Charges have been filed against a man accused in a violent hate crime against a Black family in Warren.

The suspect, who was arrested Tuesday, is described as a 24-year-old white male who lives in the neighborhood, near 11 Mile Rd. and Hoover, with his parents.

Warren Police Commissioner Bill Dwyer, who called the case "disturbing," said the man is facing nine criminal counts, eight of them felonies, including ethnic intimidation and firing a firearm into a building.

At a news conference Wednesday afternoon, Dwyer told reporters that the suspect has confessed.

"I said at the time that this case was the number one priority of the Warren Police Department, and that we would use all of our resources to bring the person responsible to justice and bring peace to the Hall family," Dwyer said. "Today I can announce that we have the person in custody."

The suspect, who remains in the Warren Police Department lockup, was scheduled to be arranged in District Court on Wednesday. His initial court appearance was then pushed to Thursday morning, and his name is being withheld until that time.

He is accused of throwing a rock through the front window of the Hall family's house on Tallman Ave. earlier this month. The tires on the Halls' cars and truck were flattened and racist graffiti was scrawled on the vehicles as well, police said.  Police said bullets also riddled the house, one of them piercing the living room couch, and multiple bullet casings were found outside the home.

Candace Hall of Warren says she forgives the suspect who has been arrested in the Sept. 9th vandalizing of her home in what is being charged today as a hate crime. In this photo Warren detectives point out a bullet hole, in addition to slashed tires and a broken window. @WWJ950 pic.twitter.com/P0DGRaZi6I

No one was injured.

The Halls told police they believe they were targeted because they put up a "Black Lives Matter" sign.

Eddie Hall is a war veteran. His wife Candace said she forgives the vandals and has been pleased by the outpouring of support from the community.

"We were terrorized for three weeks, so we want justice to be served," Candace Hall told WWJ Newsradio 950. "It doesn't mean that we don't forgive him. It just means that...when you commit a crime you have to pay for the crime that you comitted."

Candace Hall had nothing but nice things to say about the Warren PD.

"They were great in surveillance and, you know, trying to catch this guy. So, yeah, I give kudos to Commissioner Dwyer for all the hard work he put in."

"Congratulations to Warren Police Commissioner Bill Dwyer and all of the police officers who worked diligently by going door-to-door in painstakingly finding the perpetrator. This is another reason why defunding our police is a very bad idea," Fouts said. "That's why I often say that our police department is the best in the state. Thanks again Warren Police for making all of us proud of you!"

The suspect faces more than a decade in prison if convicted as charges.