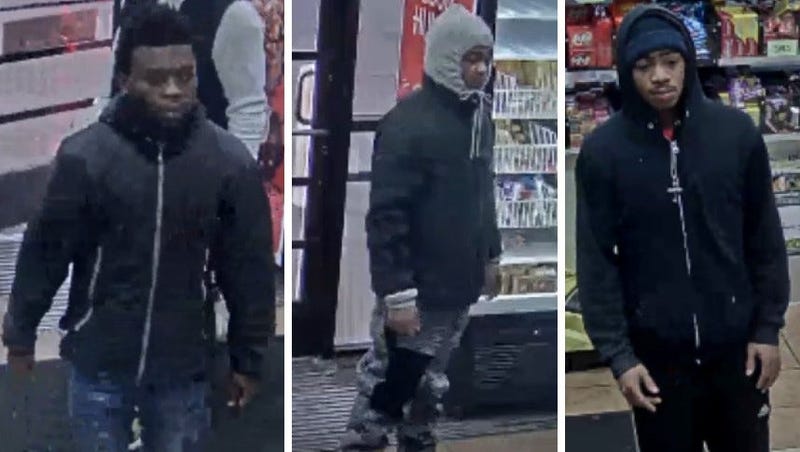 DETROIT (WWJ) - Detroit Police are hoping the public can help identify three suspects involved in a robbery at a west side group home.

The robbery happened around 8 a.m. Wednesday in the 13500 block of Manor, in a neighborhood off I-96 near Meyers Road.

According to police, two suspects walked into the home and entered the 56-year-old victim's bedroom, pushed him to the ground and took his debit card, then fled the scene on foot.

Investigators say the suspects then went to a Marathon gas station off Grand River Avenue and Wyoming and withdrew money from the victim's account while a third suspect acted as a lookout.

Green Light footage revealed two suspects entering the gas station at 8:19 a.m. and immediately going to the ATM. A third suspect enters at approximately 8:21 a.m. and keeps a lookout at the front counter. After 7 minutes, all three suspects leave on foot.

The first suspect is described as a black male with a dark complexion and an afro, wearing a dark hoodie, blue jeans and white gym shoes.

The second suspect is described as a black male with a light complexion, wearing a gray hoodie, dark jacket and blue jeans.

The third suspect is described as a black male with a light complexion, wearing a dark hoodie, blue hat and jogging pants.

Anyone who recognizes the suspects or has any other information is asked to contact the Detroit Police Department's Second Precinct at 313-596-5240. Tips can also be submitted anonymously to Crime Stoppers at 1-800-SPEAK-UP.