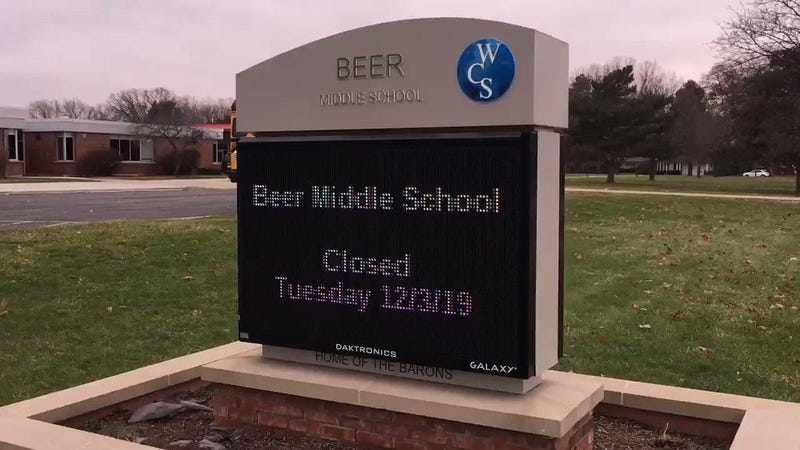 WARREN (WWJ) - A 13-year-old Warren boy is facing a criminal charge after he allegedly threatened to shoot up his middle school.

Macomb County Prosecutor Eric Smith on Wednesday authorized a charge of Intentional Threat to Commit Act of Violence Against School, School Employees or Students -- a one-year misdemeanor -- against the young suspect, in connection an online threat against Agnes E. Beer Middle School.

Why only a misdemeanor?

"If we'd gone to his house and found guns or skematics or a hit list, something like that we would have charged the ten-year felony instead, but there was none of that," Smith told WWJ's Sandra McNeill. "This is just another dumb kid who, you know, acts before he thinks and gets himself in some serious trouble."

On Monday, December 2, at 9:40 p.m. the Warren Police Department received notice of an alleged shooting threat. The threat was also shared on the anonymous state tip line, OK2SAY. This prompted the Warren Consolidated Superintendent to notify parents of the threat and close school for the following day.

The alleged threat, which came in a group chat, stated: "I'm going to shoot the school up, because of her," according to Warren Police Chief Bill Dwyer.

"I'm not sure exactly what that means, 'because of her,' but that was what was put out," he said.

The teen, who police say had been suspended from school for previous bad behavior, was arrested following an investigation.

“We commend those students who saw the message for promptly alerting parents and law enforcement, and ensuring the actions described in the threat would not be carried out," Smith said. “While my office will never underplay the serious nature of such threats, it is my hope that the youth who make these horrific threats, learn from their detestable actions and get the treatment they need."

The boy has been ordered to remain the Macomb County youth home, pending his next appearance in juvenilecourt, which has not yet been scheduled.

His name will not be released due to his age.