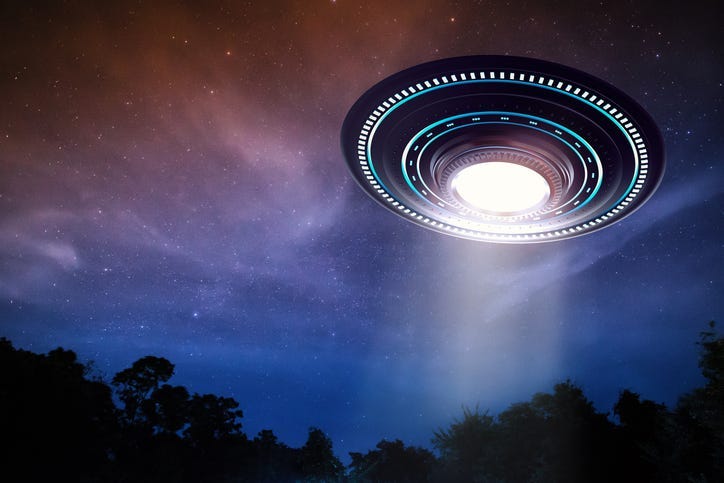 (WWJ) It's not a star, and doesn't look like a plane — so what is that shiny object in the night sky?

Imaginations are running wild across the state, as reports of UFO sightings are on the rise here in Michigan.

Director Bill Konkolesky, of the Michigan chapter of the Mutual UFO Network, said they've received more than 180 reports of "unidentified flying objects" spotted by people in the state so far in 2020.

"We saw an uptick in UFO reports starting earlier this year. In the spring there was definitely a big uptick,"  he told WWJ's Sandra McNeill. "You could say that there was a correlation between the beginning of the (coronavirus) pandemic and the beginning the the sightings."

Konkolesky said that could be because more people at home, and outside enjoying the warmer weather.

And while Konkolesky cannot rule out a flying saucer or two, he believes he knows what many Michiganders are seeing:

It's the Starlink satellites put up by Elon Musk's company SpaceX, to boost wi-fi signals.

"They are sent up in long strings, so when you see them — usually either when the gun is going down or the sun is coming up, and the sun is bouncing off of them — what you see is a string of lights flying across the sky, this chain of light...and it looks really spooky," Konkolesky, said. "And if you don't know what these things are, yes they do look like a fleet of UFOs coming to invade."

Konkolesky said about one -third of UFO sightings in Michigan this year have been linked to those satellites. "And more and more are being launched all the time," Konkolesky said. "(Musk) is planning on launching thousands of these things."

Traditionally, in any given year in Michigan, Konkolesky said his group gets roughly around 200 UFO sighting reports.

As for the rest?

"The could be other satellites, they could be other types of aircraft, celestial objects. People still report Venus as a UFO, that's true," Konkolesky said. "And then there's that last remaining somewhere between 20% and 5% that we just can't identify, and we mark as unidentified. And those are the interesting ones that keep us involved."

As an example: Konkolesky said there was a compelling sighting recently over Lake St. Clair.

"Just a couple of weeks ago, it was a bright light just hovering over the lake, and a couple witnesses spotted this on their boat. And the thing exploded and turned into three white lights and a red light that hovered there in the sky," he said. "So that one as kind of strange; no idea what that was."