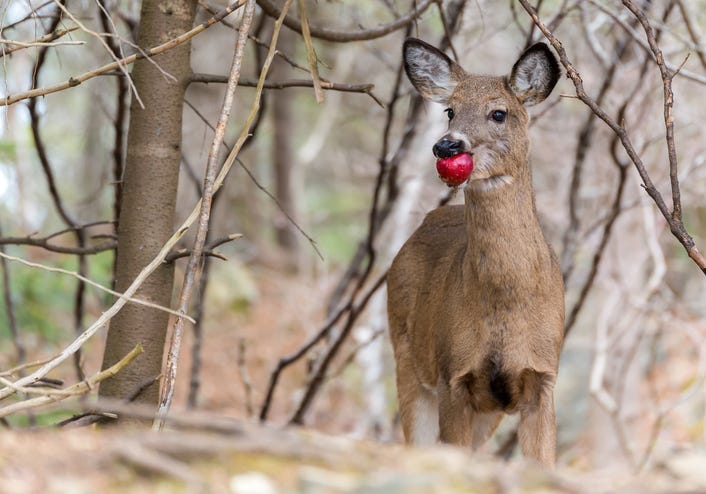 LANSING (WWJ) - Gov. Gretchen Whitmer has vetoed a bill that would have lifted a controversial ban on using bait to hunt deer in Michigan.

House Bill 4687, which won final House passage early this month, would have removed the Natural Resources Commission's authority to regulate deer baiting and feeding, allowing anyone to bait or feed during the open season for deer or elk.

The concern, the governor said, is that using bait to lure deer closer to hunters increases the chances of spreading Chronic Wasting and other diseases, as deer feed in groups and oftentimes nose-to-nose. As the number of cases of disease increase, she said, so do the chances that domestic animals, including dairy cows and beef cows, will be exposed.

“I remain fully committed to protecting Michigan’s wildlife, public health, and agriculture jobs,” said Whitmer. “This legislation would’ve increased the chance of spreading wildlife disease within wildlife populations and the beef and dairy industries, which are vital to Michigan’s economy. That’s not a risk we can afford to take. By vetoing this legislation, the authority to ban baiting and feeding will remain with the experts at the Natural Resources Commission, in accordance with the will of the overwhelming number of Michiganders who supported proposal G. Leaving the ban in place will allow the state to continue working to curb the spread of diseases like Chronic Wasting Disease.” (Learn more about CWD HERE).

Among those condemning Whitmer's veto is State Rep. Michele Hoitenga (R-Manton), who said she plans to continue fighting against hunting overregulation, and for a solution to this issue.

She called on the governor’s office and the Department of Natural Resources to work with her on a compromise.

“The governor continues to illustrate she is completely out of touch with people in northern Michigan,” Hoitenga said, in a statement. “The baiting ban does absolutely nothing to prevent the spread of disease among our deer. In fact, it’s having the opposite effect by driving hunters away from the sport. Thinning out the deer herd is the best way to prevent disease from spreading. We need hunters to participate to prevent overpopulation.”

The DNR took to social media last month to remind hunters about the ban, which has been publicly bashed by musician and avid hunter Ted Nugent, who said it's "going to chase hunting families out of the sport."

Get more information about deer baiting and feeding rules in Michigan at this link.