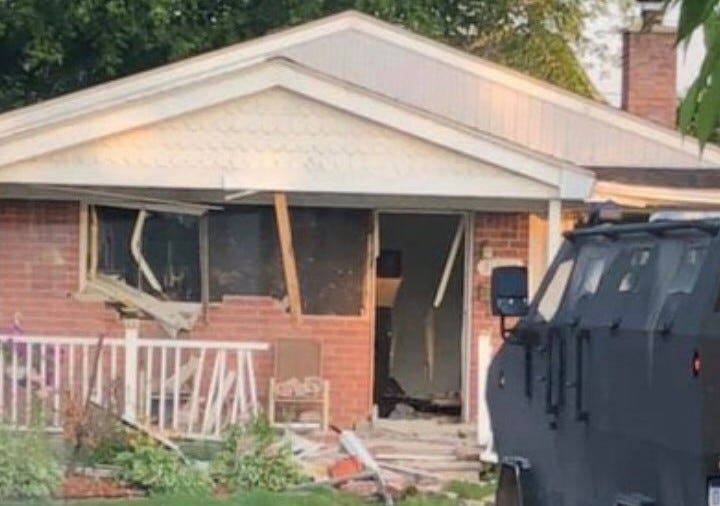 UPDATE: In an effort to have the standoff end peacefully, police are now pumping water into the home of the gunman to try and force a surrender. The standoff has been going on for over 20 hours at this point.

After shooting two people last night, following an argument over fireworks, a man has holed himself up in a house and is in a standoff with St. Clair Shores Police. The incident took place on St. Margaret Margaret Street near 13 Mile and Masonic.

There are reports that the shooter isn’t alone in the house and there may be a woman with him.

The police were called about the incident around 10 p.m. on Thursday.

“He was upset that some kids were using fireworks,” said St. Clair Shores Deputy Police Chief Gary Crandall, “He went out with a flashlight, or some type of light, and that made the neighbors upset. They asked him to stop flashing the light and, at that point, that’s when it all started.”

The shooter than opened fire, shooting a 12-year-old girl and her 62-year-old woman. Both were taken to the hospital and have been treated and released.

The St. Clair Shores Police Department is working with SWAT and are willing to take as long as possible to ensure the dispute ends peacefully.

“We will take as long as we can to peacefully resolve this issue. But we have used a lot of techniques and technologies and we’ll see.”

The shooter doesn’t seem to have the same feelings. He was opening fire on the police all night.

“Last night it was on several different occasions,” said Crandall, “Officers would walk around and we’d hear a bunch of gunshots.  We used the GPV vehicle to try and breach the door, he shot at them again last night. It was another round of shots and right now he’s shooting at the robots.”

Those robots he’s shooting at are being operated by the police to try and locate where the man is within the house.

“Right now, were working with the State Police and working with their robots. He’s currently hiding somewhere in the house and every time a robot gets close to him, he’s opening fire on the robots. We are trying to come up with different ways to get him out of the house.”

Police negotiators have been calling the gunman, but he hangs up immediately.

Crandall reiterates that the shooter and the situation is still incredibly dangerous for bystanders.

“Obviously he’s been shooting at us all night,” said Crandall, “If he shoots at us, he’s already shot a couple other people, he’s very dangerous.”