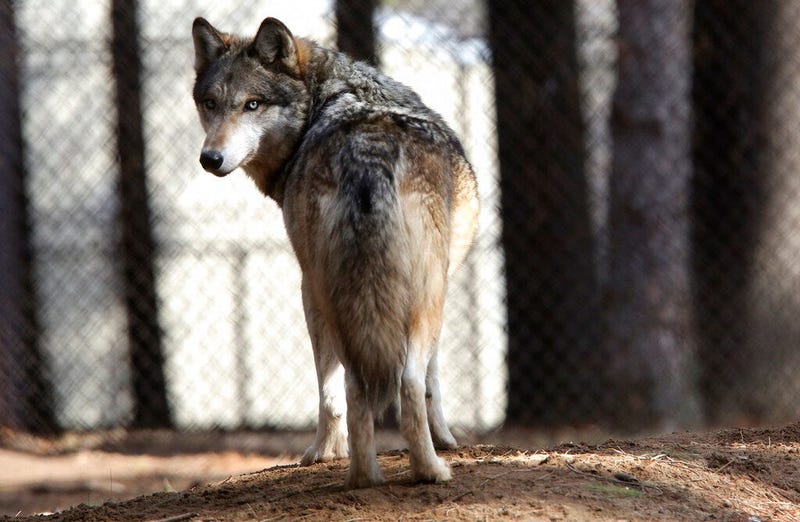 BILLINGS, Mont. (AP) - Gray wolves in the U.S. would be stripped of federal protection and subject to hunting and trapping in more states under a proposal released Thursday that declares the predators recovered following a decades-long restoration effort.

The U.S. Fish and Wildlife Service wants to revoke the wolves' endangered and threatened species status and put them under authority of state wildlife agencies across the Lower 48 states. The Associated Press reportedlast week that the proposal was in the works.

Wildlife advocates and some members of Congress said the move is premature because wolves occupy only a fraction of a historical range that once stretched across most of North America.

But Acting Interior Secretary David Bernhardt said it was "indisputable" that wolves had recovered enough to meet recovery goals. He said the agency could now devote more work to species in greater need.

Livestock interests, hunters and officials in some states have wanted the government to make it easier to kill wolves. The predators periodically prey on livestock such as cows and sheep and have been blamed for declining numbers of elk, moose and other big game in some areas.

"We need to take control of these wolves," said Tony Demboski with the Upper Peninsula Sportsmen's Alliance in Michigan, where there are an estimated 660 of the animals. "They're cleaning up our deer herd, we've got people scared to go for a walk in the evenings. We've just got too many wolves."

Those who want more wolves in more places say such fears are overblown. Wolves very rarely attack people, and far more livestock are killed by other causes, including coyotes and disease.

"It doesn't have to be either or — we have livestock or we have wolves," said Kate Dylewsky with the Animal Welfare Institute. "Co-existence with wolves is very possible."

Trapping, poisoning and hunting campaigns early last century exterminated wolves across most of the Lower 48 states by the 1930s. More than 6,000 of the animals now live in portions of nine states, officials say.

A final decision on lifting protections will follow a public comment periodthat begins Friday and runs through May 14.

Government officials said their goal was to protect wolves from extinction, not return them to everywhere they were once found.

The Endangered Species Act is not "a means to keep species from being hunted in perpetuity once they've met the threshold of recovery," said Gavin Shire, spokesman for the Fish and Wildlife Service.

Environmentalists and animal advocacy groups have pledged to challenge in court any action to ease or eliminate protections.

Putting gray wolves under state control would allow Minnesota, Michigan and Wisconsin to resume hunting and trapping blocked by a 2014 court ruling that returned them to the endangered list.

In other areas, such as the Pacific Northwest, wildlife officials say they have no immediate plans for hunting but could consider it in the future.

Aside from Alaska only three states — Montana, Idaho and Wyoming — currently allow the public to hunt wolves.

More than 600 were killed in the Northern Rockies states during the most recent hunting and trapping seasons.

Court rulings delayed hunting in the Northern Rockies for years after wolves reached the government's benchmark for recovery in the early 2000s. Members of the region's Congressional delegation ultimately inserted a provision into a budget bill that forced the animals off the endangered list.

Protections will be retained under Thursday's proposal for two small populations of related species — the Mexican gray wolf in New Mexico and Arizona and the red wolf in North Carolina.