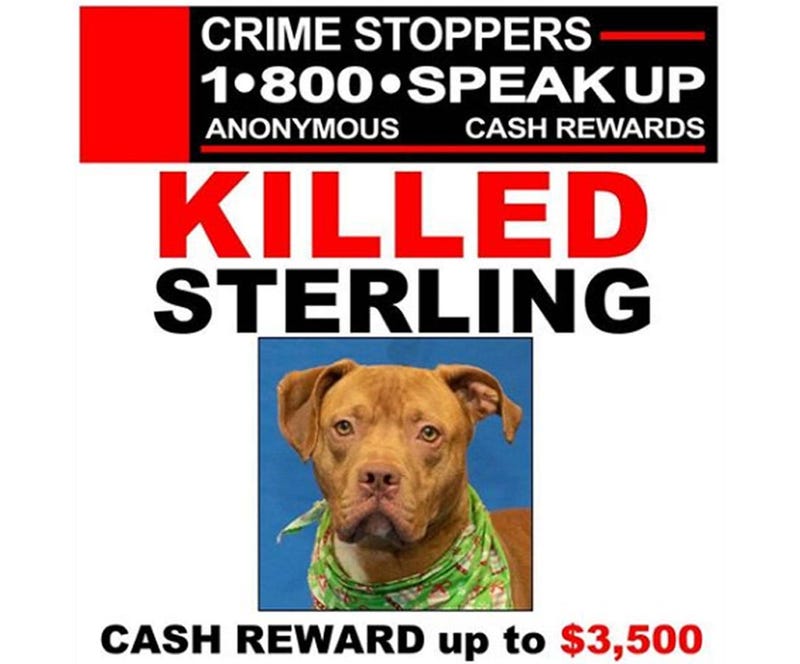 UTICA, Mich. (WWJ) -- A Macomb County man is facing up to four years in prison after allegedly torturing and killing his dog.

Alexander Gerth, of Utica, was arraigned Thursday on charges of stabbing and killing his two-year-old pit bull mix, Sterling.

The Michigan Humane Society and Crime Stoppers of Michigan were offering up to $3,500 in rewards for tips in the case.

Gerth admitted to stabbing Sterling multiple times and leaving him out in the cold last week.

The dog was found under a picnic table in Utica's Grant Park, right behind Gerth's apartment building. There was a trail of blood from a trash can to the picnic table; investigators are unsure whether the dog was put in the trash can alive and crawled to his death.

Gerth is charged with one count of killing/torturing an animal -- which is a four-year felony.

Officials say the dog was adopted and returned twice through the Michigan Humane Society before being adopted a third time in December. The Humane Society in Westland says Gerth, 22, tried to adopt the three-year-old dog in December, but his application was denied.

A few days later, another person went to the same shelter and had an interest in Sterling. That person was approved to adopt the dog.

WXYZ in Detroit reports that the Humane Society says an investigation revealed that Sterling was adopted under false pretenses, as Gerth convinced a friend to adopt the dog for him.

Gerth's roommate tells WXYZ that he soon realized the dog was in danger. He reports seeing Gerth hit, grab and drag the dog.

He was reportedly afraid to say anything because he didn't want to be kicked out of the apartment. The roommate's girlfriend tried alerting Macomb County Animal Control, but says they needed proof in order to look into it.

She reportedly took pictures of what appeared to be cigarette burns on the dogs face, but did not turn them in before it was too late.

Investigators say Alexander Gerth, the defendant, convinced a friend to adopt the dog for him after he was denied by the humane society.
https://t.co/IlHhYvMhBF

The roommate reports that upon returning home one night last week, Sterling was missing, his dog bowls and his chew toys were in the trash.

Sterling was found in the park that day.

Gerth's bond was set at $500,000 on Thursday. He is currently on federal probation for a bank robbery conviction.