(WWJ) Next Friday will mark ten years since Andrew, Alex, and Tanner Skelton disappeared after spending Thanksgiving with their father in Morenci, Michigan.

Now the unsolved mystery is getting some renewed national attention.

HLN Original Series Real Life Nightmare looks at the case of the missing boys -- who would now be 19, 17, and 15 years old, in an episode set to air this Sunday at 10 p.m.

The boys are seen as they looked when they went missing. Photo credit Handout

The brothers were last seen in John Skelton's backyard in southern Lenawee County on Thanksgiving just before they were supposed to be returned to their mother. 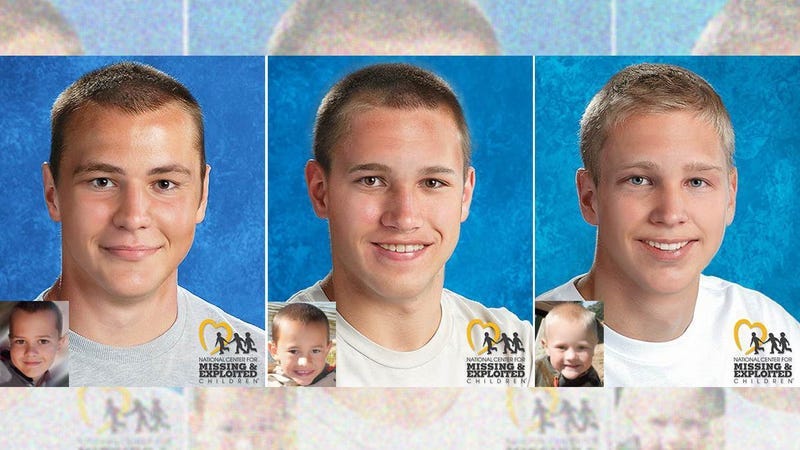 "He's convinced that, you know, somebody that morning had to have seen John Skelton in that area," Jostad told WWJ's Beth Fisher.

"He's driving this 2000, I believe it was, blue Dodge Caravan. And Chief Weeks really believes that that's the key -- finding the witness that may have been in the area that morning,"

John Skelton has given conflicting accounts of what happened to the kids, including giving them to an underground group to protect them from their mom, but police said his claims just didn't add up.

Jostad said the John Shelton has since changed his story, but maintains that did not harm his children.

While there's no evidence to prove the boys are dead, or that they're still alive, Jostad said John Skelton searched "breaking necks" on the internet -- something the dad claims the kids asked him to do after a movie they watched.

The father pleaded no contest to three counts of unlawful imprisonment in September 2011. He was sentenced to 10-15 years in prison, and is due to be released in 2025.

Jostad said the boys' mother Tanya Zeuvers has hope, but is realistic. She just wants answers.

"It's one of those stories that you figure, you know, eventually some evidence will be found," Jostad said. "Somebody will come forward and, you know, crack this case. And that just hasn't happened."

Anyone who has information on the Skelton brothers is asked to contact Michigan State Police at 517-636-0689 or at michigan.gov/michtip.