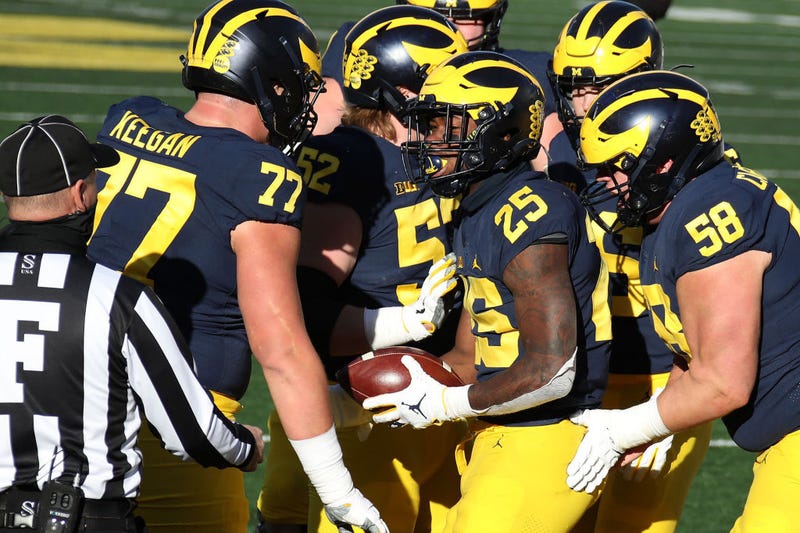 Hassan Haskins #25 of the Michigan Wolverines celebrates his second half touchdown with teammates while playing the Penn State Nittany Lions at Michigan Stadium on November 28, 2020 in Ann Arbor. Photo credit Photo by Gregory Shamus/Getty Images

(WWJ) Some college athletes in Michigan will be able to get paid for the first time, without costing them their eligibility, under a new state law.

Gov. Gretchen Whitmer on Wednesday signed bipartisan legislation allowing student athletes to use their own name, image, likeness, and reputation for financial compensation.

State officials say this marks the first time in Michigan history that collegiate athletes will have the opportunity to financially benefit from the countless hours they commit to their sport while attending school.

“For years we have all enjoyed the incredible talent of young athletes across the state. This legislation will change the lives of young men and women for years to come,” said Whitmer, in a statement. “As one of the first states in the nation to pass this historic legislation, I am proud to sign this bipartisan legislation today on behalf of our current and future student athletes. I am hopeful that the NCAA will set a national standard so that all players across the country are afforded the same opportunities.  As always stay safe and go green!”

House Bill 5217 prohibits post-secondary educational institutions from enforcing rules that prohibit student athletes from profiting from promotional deals. Students may earn compensation for their name, image, or likeness, and could not be prevented from playing intercollegiate sports or receiving scholarships because of doing so. The bill was sponsored by Representative Brandt Iden (R-Kalamazoo).

House Bill 5218 repeals a section of the Penal Code which prohibits athletic agents from inducing students into contracts before their eligibility for college athletics expires. The bill also repeals a section of the Revised Judicature Act which creates civil liability for interfering with the “prospective advantage” given by an institution of higher education by virtue of its relationship with the student athlete, by promising an improper gift or service to the athlete, if that gift results in injury to the school. The bill was sponsored by Representative Joe Tate (D-Detroit).

The bills allow players from any sport in all divisions to use agents to earn money from their own image, name, or likeness. However, students cannot enter into an apparel contract that conflicts with the apparel contracts of their school, and must disclose contracts to their school prior to signing. The bills do not establish the right for students to use trademarked names, symbols, intellectual property, and logos of schools, associations, or conferences.

“It’s high time that collegiate players are respected and compensated for the talents that they’ve spent their entire lives trying to perfect,” said Joique Bell, former running back with the Detroit Lions and Wayne State University. “I’ve always supported the efforts to protect the best interests of athletes, especially those with tremendous abilities who play at all levels of the NCAA. Working two jobs, going to school full time, playing football and raising my son is a lot for any person, especially financially. My story is just one of many for collegiate student athletes. We need to continually find ways to help student athletes get ahead and build their brands early, while also protecting the players and the integrity of the sport.”

Michigan is among one of the first states to pass and sign legislation surrounding the compensation of student athletes. Governor Whitmer has called on the National Collegiate Athletic Association (NCAA) to set a national standard so that all states can follow in Michigan’s footsteps and create a consistent framework for student athletes across the country.

“At its core, this legislation is to ensure student-athletes in Michigan are treated fairly and they are able to have fulfilling college experience. I am proud of the opportunity to work on getting this legislation across the finish line,” said Representative Joe Tate.

HB 5217 and 5218 will take effect on December 31, 2022, except for a reporting requirement in Section 9 which goes into effect immediately.