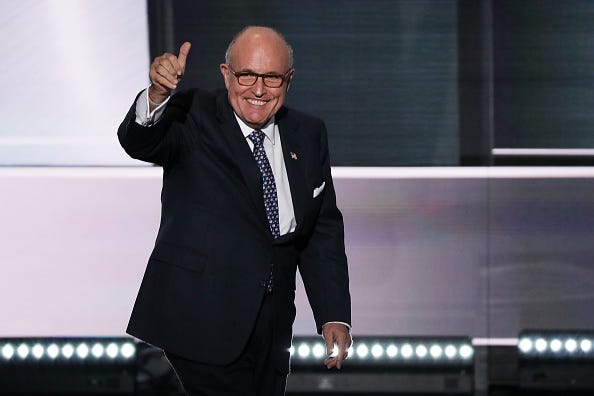 President Trump's personal lawyer Rudy Giuliani testified before a House Oversight Committee Wednesday night in Lansing where he claimed without proof that Detroit is "one of the most corrupt cities in America."

Also without corroboration or evidence, he said the election was stolen away from Trump, and that people should be "ashamed" of the vote counting at the TCF Center in Detroit. Notably, Biden easily won Detroit and won Michigan by more than 150,000 votes.

Rudy Giuliani repeats claim that Detroit is one of most corrupt cities in USA, but says city should feel better because NYC and Chicago are more corrupt.

"They stole the election. It’s not the first one they stole. Not gonna be the last one."

Giuliani produced several witnesses who claimed the voting machines were designed to be inaccurate, that ballots were deliberately changed and some Republican poll workers were intimidated -- all claims that have been disputed by the Michigan attorney general, among many others. Numerous lawsuits by the Trump campaign --limited to states he lost -- claiming voter fraud were tossed out by the courts as baseless.

And a spokesman for Michigan's Attorney General Dana Nessel said neither Giuliani or anyone else with the Trump campaign has provided any evidence of voter fraud to her office. If they did, it would be investigated, the spokesman said.

Still, last night's fiery testimony dragged on for three hours, with one witness for Giuliani drawing ire for saying it was impossible to tell Chinese voters from each other because they "all look the same." "If some Chow shows up, you can be anybody and you can vote,” the woman said in a heavy accent.

“I think Chinese all look alike. How can you tell? If some Chow shows up, you can be anybody and you can vote.” -one of Rudy Giuliani’s witnesses yesterday insisting there must have been voter fraud in Michigan

Some in the audience laughed and jeered as Giuliani spoke.

The attorney himself sparred with state Rep. Darrin Camilleri, (D-Brownstown) the 25-year-old first-term representative and school teacher who attempted to get witnesses to be sworn in so their testimony was legally binding. His attempt failed.

Giuliani reinforced several times that he had not been sworn in, something that obviously did not impress Camilleri. "This is not Four Seasons Landscaping, this is the Michigan State Legislature," Camilleri said.

Freep.com called the hearing "unorthodox" and said members essentially ceded control of it to Giuliani. "Embodying his former role as prosecutor, Giuliani spent more than three hours asking questions of witnesses who accompanied him to the hearing as a means to present what the Trump campaign deems to be evidence of fraud," freep.com wrote.

"This is a swindle, it's a con job, it's the theft of an election," Giuliani said.

"They stole the election."

Other members of the committee pushed back and said he was lying.

In the end, most said it amounted to a lot of talk with no real meaning. "The board of canvassers certified that (the vote) and as far as I'm concerned, it's over," Oversight Committee Chairman Matt Hall told WWJ Thursday.