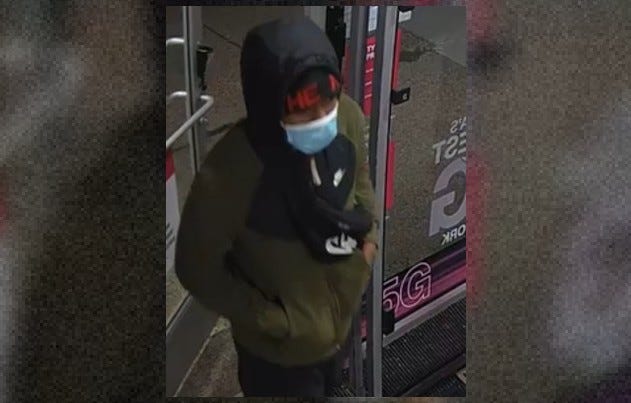 (WWJ) Detroit Police are asking for tips from the public as search for a suspect in an armed robbery on the city’s east side.

According to investigators, shortly before 6 p.m. on Nov. 5, the suspect was posing as a customer at a T-Mobile store, in the 18500 block of Mack Ave.

While he was being helped by a store employee, the suspect pulled out a gun, police said, and forced the 27-year-old man to the back of the store office.

The suspect then demanded that the victim fill a bag with dozens of iPhones; also taking a black handgun from the store's safe, police said.

The suspect then left out the back door and fled on foot, heading west on Opal.

The suspect is described as a Black male with dark complexion, between 20-30 years-old, 5”8 tall and around 180 lbs., with short hair. He was last seen wearing a black mask, green North Face hoodie and dark pants.

Police released an image of the man from the store's security camera, hoping someone in the public can identify him.

Anyone who knows the suspect or who has any information about this crime is asked to call the Detroit Police Department’s Fifth Precinct Investigative Unit at 313-596-5540 or Crime Stoppers at 1-800-Speak Up (1-800-773-2587). As always, all calls to Crime Stoppers are 100% anonymous.