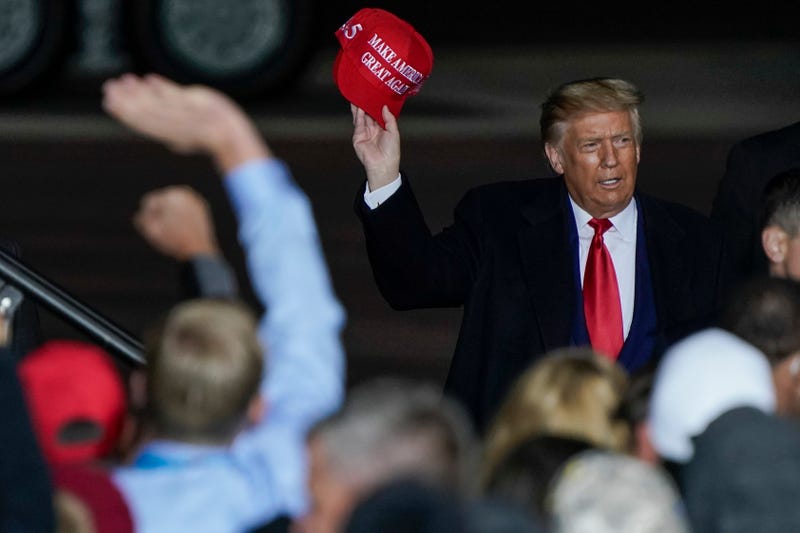 MADISON, Wis. (AP) — Hackers have stolen $2.3 million from the Wisconsin Republican Party's account that was being used to help reelect President Donald Trump in the key battleground state, the party's chairman told The Associated Press on Thursday.

The party noticed the suspicious activity on Oct. 22 and contacted the FBI on Friday, said Republican Party Chairman Andrew Hitt.

Hitt said the FBI is investigating. FBI spokesman Brett Banner said that, per policy, "the FBI is not permitted to confirm or deny an investigation.” The Wisconsin Department of Justice, which has a center focused on cyber crime able to assist if requested, has not been asked to investigate, said spokeswoman Rebecca Ballweg.

The alleged hack was discovered less than two weeks before Election Day, as Trump and Democratic rival Joe Biden made their final push to win Wisconsin and its 10 electoral votes. Trump won the state by fewer than 23,000 votes in 2016 and was planning his third visit in seven days on Friday. Biden also planned to campaign in Wisconsin on Friday. Polls have consistently shown a tight race in the state, usually with Biden ahead by single digits and within the margin of error.

Hitt said he was not aware of any other state GOP being targeted for a similar hack, but state parties were warned at the Republican National Convention this summer to be on the lookout for cyber attacks.

“We have been in contact with the state party and are assisting them through this process," said Republican National Committee spokesman Michael Ahrens. "The RNC never left Wisconsin after 2016, and we are confident that our ground game and the millions we are spending on TV and digital will deliver us another win there in 2020.”

The reported hack exposed new tensions in the final days of the race between the Trump campaign and the state party, which overspent and failed to properly account for its expenditures in 2018, leading to a shakeup in top party leadership.

Campaign officials in Wisconsin learned about the alleged hack from media reports and were furious that state officials had not briefed them on how it might impact operations, according to a Trump campaign official who requested anonymity because the person was not authorized to discuss internal conversations.

“I personally received a call notifying me as a senior official for the campaign,” he said. "We have complete trust in the Republican Party of Wisconsin and know they will deliver the state for the President in four days.”

There have been more than 800 attempted phishing attacks for financial gain targeting the Wisconsin Democratic Party this campaign cycle, but none has been successful, said party spokeswoman Courtney Beyer.

The alleged hack is “certainly embarrassing” for Republicans, said Matt Rothschild, leader of the Wisconsin Democracy Campaign, an independent group that tracks campaign donations and spending.

“It’s got to hurt them and their ability to function at this crucial moment,” he said. “I can’t see any upside for them in this matter.”

Hitt stressed that the money stolen was for services already rendered.

“While a large sum of money was stolen, our operation is running at full capacity,” he said.

Hitt said the hackers manipulated invoices from four vendors who were being paid for direct mail for Trump's reelection efforts as well as for pro-Trump material such as hats to be handed out to supporters. Invoices and other documents were altered so when the party paid them, the money went to the hackers instead of the vendors, Hitt said.

It was discovered after someone noticed that an invoice was generated that should not have been, he said.

Hitt said it appears the attack began as a phishing attempt and no data appears to have been stolen, said party spokesman Alec Zimmerman.

The money was stolen from the state party's federal account, which currently contains about $1.1 million, but that number fluctuates daily because of quick moving resources late in the campaign, Zimmerman said. Money in the federal account can only be spent on federal races and donations are capped at $10,000 per individual each calendar year.

Early voting is in full swing in Wisconsin, with more than 1.6 million ballots returned as of Thursday morning. That is nearly 55% of the total vote cast in 2016.