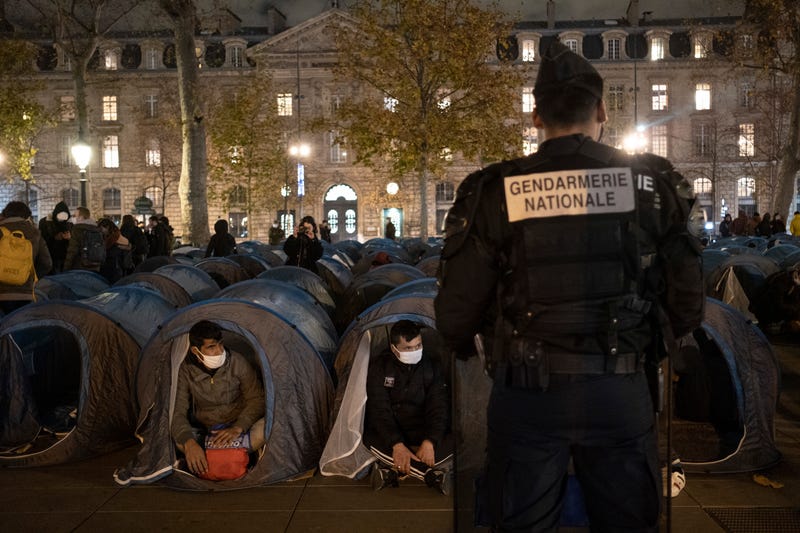 Aid groups and the government were working to find temporary lodging for hundreds of migrants forcibly removed from the short-lived camp on the Place de la Republique in eastern Paris on Monday night.

The evacuation, filmed by journalists and activists, drew nationwide attention amid tensions over a draft law beefing up police powers that easily passed a vote in France’s lower house of parliament Tuesday.

“Was I shocked by some of the images (of the evacuation)? The answer is yes,” Darmanin told Parliament.

His rapid reaction to the outcry stands in contrast to his vigorous defense of police officers in recent months, and to the government’s tepid response to more severe and sustained violence by police at protests by yellow vest activists and others in recent years.

In the Monday night evacuation, police lifted tents with migrants inside, shaking them until they tumbled to the ground, and those who resisted were kicked or beaten with batons, according to the head of aid group Doctors Without Borders in France, Corinne Torre.

Images shared online showed activists and local officials shouting and trying to block police from dislodging the migrants. Torre, who witnessed the evacuation, said several people sought treatment for injuries from her aid group, known by its French acronym MSF.

Aid groups and Paris legislators said they set up the protest camp to call attention to the plight of hundreds of migrants who were kicked out of another camp in the shadow of France’s national stadium last week and have been sleeping in the streets since then for lack of other options.

Most are from Afghanistan, Somalia and Eritrea, and some have been refused asylum while others are in bureaucratic limbo while they try to apply, Torre said.

The Paris police headquarters said in a statement that the Republique camp was evacuated because it was illegal, and “invited” the migrants to seek lodging elsewhere offered by the state or aid groups.

The ministers for citizenship and housing said in a statement Tuesday that 240 potential spots in temporary lodging had been located for the migrants, saying they “should be treated with humanity and fraternity.”

The draft law facing a vote Tuesday in the National Assembly is meant to strengthen local police and provide greater protection to all officers. It notably makes it a crime to publish images of officers with intent to cause them harm, a measure that has prompted repeated protests by civil liberties campaigners and media freedom groups.