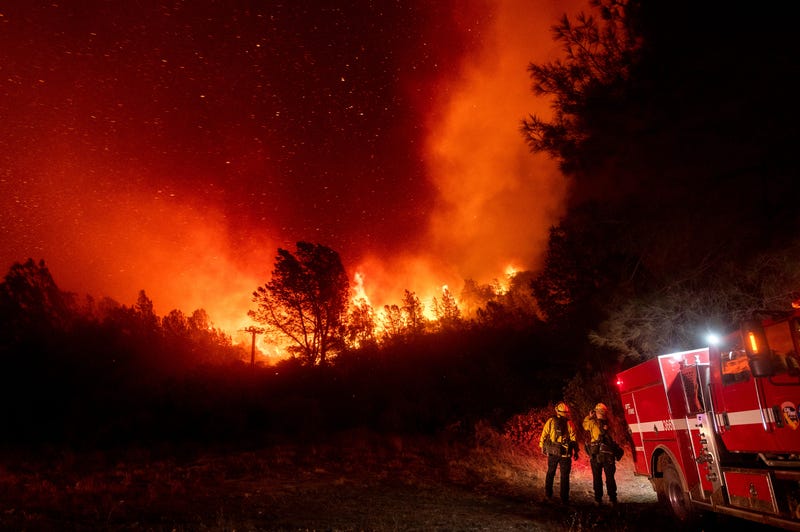 Photo credit Firefighters watch the Bear Fire approach in Oroville, Calif., on Wednesday, Sept. 9, 2020. The blaze, part of the lightning-sparked North Complex, expanded at a critical rate of spread as winds buffeted the region. (AP Photo/Noah Berger)
By The Associated Press

Butte County sheriff’s deputies and detectives found seven bodies on Thursday, a day after three other victims were discovered. Among those unaccounted for are grandparents who told their son they were going to try to escape the flames by finding shelter in a pond.

More bodies could be found as crews manage to make their way into devastated areas. A team of anthropologists from Chico State University were helping in the search, sheriff's Capt. Derek Bell said.

The weeks-old fire was about 50% contained when winds drove it into explosive growth on Tuesday, driving it through rugged Sierra Nevada foothills and destroying much of the town of Berry Creek.

Some 2,000 homes and other buildings officials have burned, fire officials said.

The fire is among five this year that have set records for the most land ever burned, including a blaze that broke the mark Thursday as the largest ever.

More than 4,800 square miles (12,500 square kilometers) have burned so far this year — more land than Rhode Island, Delaware and Washington, D.C., combined — and fall is typically the worst season for fires. Twelve people have been killed and nearly 4,000 structures have burned across the state.

The fires, fed by drought-sapped vegetation amid warming temperatures attributed to climate change, have spread at an alarming rate and given people less time to flee.

Hundreds of campers, hikers, and people spending Labor Day weekend at mountainside reservoirs and retreats had to be evacuated by military helicopter when they got stranded by a fast-moving fire that broke out in the Sierra National Forest in the center of the state during record-setting high temperatures.