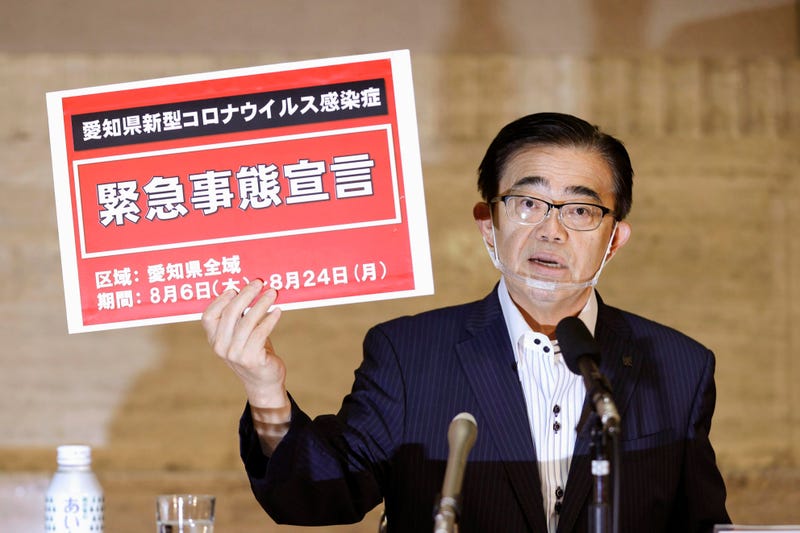 Photo credit Aichi Gov. Hideaki Ohmura shows off a placard "State of Emergency" in Nagoya, Aichi prefecture, central Japan, Thursday, Aug. 6, 2020. Ohmura announced a state of emergency Thursday due to rising virus cases and asked businesses and people to curb their activities, especially during an upcoming holiday. Aichi prefecture has been seeing more than 100 new infections reported daily since mid-July after an extended period of zero new daily cases. (Kyodo News via AP)
By The Associated Press

TOKYO (AP) — A governor in central Japan announced a state of emergency Thursday due to rising virus cases and asked businesses and people to curb their activities, especially during an upcoming holiday.

Aichi prefecture has been seeing more than 100 new infections reported daily since mid-July after an extended period of zero new daily cases. The prefecture includes the major city of Nagoya and the headquarters of Toyota Motor Corp., Japan’s top automaker.

The requests continue through Aug. 24, a period that coincides with Japanese Obon holidays, when schools and many companies close.

“Please avoid non-essential activity during the Obon holidays,” Ohmura said, asking people not to dine out in big crowds or go out partying. “The situation we are in is very serious.”

About 70% of the recent cases were people in their 30s, and most were showing no or mild symptoms, but Ohmura said worries were growing about more vulnerable people getting sick.

Japan has not had a lockdown. The voluntary emergency measures put in place in April, asking for social distancing to be used and businesses to close, were gradually lifted.

The national government's actions have been called inadequate, pushing economic growth at the risk of human life, such as the “GoTo” campaign, which encourages domestic travel with government-backed discounts.

Japan has so far nearly 42,700 coronavirus cases and about 1,000 deaths, according to Johns Hopkins University tally based on official figures.

— A makeshift hospital with 700 beds for virus patients has been completed in a Vietnamese city struggling with an outbreak. The hospital converted from a sports venue in Da Nang will be ready for patients Saturday and its capacity can be increased to 3,000 beds, the health ministry said. Over 100 health workers were mobilized from other cities to help treat patients in Da Nang. Vietnam reported another death and 20 new infections Thursday. Vietnam went months without any local infections before the Da Nang outbreak surfaced two weeks ago among a hospital's patients and staff. It has grown to 270 local infections and other cases have been found in 11 provinces and municipalities, including the country’s largest cities Ho Chi Minh and Hanoi. Authorities are ramping up contact tracing and encouraging people use of a smartphone app that would alert if users were near COVID-19 patients.

— The leader of Australia’s hot spot Victoria urged residents not to panic-buy as he announced reductions in meat productions. The state capital Melbourne began its first full day of tough lockdown restrictions on Thursday as Victoria posted 471 new virus infections and eight deaths. Premier Daniel Andrews said beef, lamb and pork production will be reduced by one third from late Friday because of the virus transmission risks in abattoirs and meat processing plants. Poultry production will be reduced by 20%. “All of these measures are designed to drive down to the lowest numbers of workers we can practically get to without at the same time delivering a shortage of products,” Andrews said. Andrews said there was no need for shoppers to stockpile. “You may not necessarily be able to get exactly the cut of meat that you want, but you will get what you need and you will get all the products that are, basically, fundamentally important to you,” he added.

— India recorded its biggest single-day death toll with 904 in the past 24 hours as fresh coronavirus infections surged by another 56,282 cases to reach nearly 2 million. The Health Ministry says the total fatalities reached 40,699, half of them in the past 30 days. India has the third-most cases in the world and the fifth-highest death toll. A fire at a hospital intensive-care unit killed eight coronavirus patients in the western city of Ahmedabad. Thirty-five patients were shifted to other hospitals. An electrical short-circuit was suspected of causing the fire.

— Nepal’s government has reimposed some restrictions, shutting down hotels and restaurants and restricting travel because of the increasing number of coronavirus cases. The Home Ministry statement said all gatherings would be prohibited and movement of people and vehicles would not be allowed during the night. In the districts with high numbers of cases, vehicles would be allowed on the streets on alternating days by even-odd license plate numbers. Nepal's lockdown imposed in March lasted for 120 days before being lifted last month. The country has 21,390 cases and 60 deaths from coronavirus.

— China's biggest recent outbreak of coronavirus has grown slightly. More than 600 people have developed COVID-19 in the far northwestern region of Xinjiang, with 27 new cases reported Thursday in its capital and largest city, Urumqi. Another three cases were reported in the northeastern port city of Dalian, where a smaller outbreak has been traced to a seafood market, and seven cases were reported among Chinese travelers arriving from overseas for a total of 37 over the previous 24 hours. Hong Kong reported 85 new virus cases and one additional death. The origin of 33 of the cases remains unknown, according to the city’s Center for Health Protection. Hong Kong has recorded 43 deaths from the virus among more than 3,700 cases.