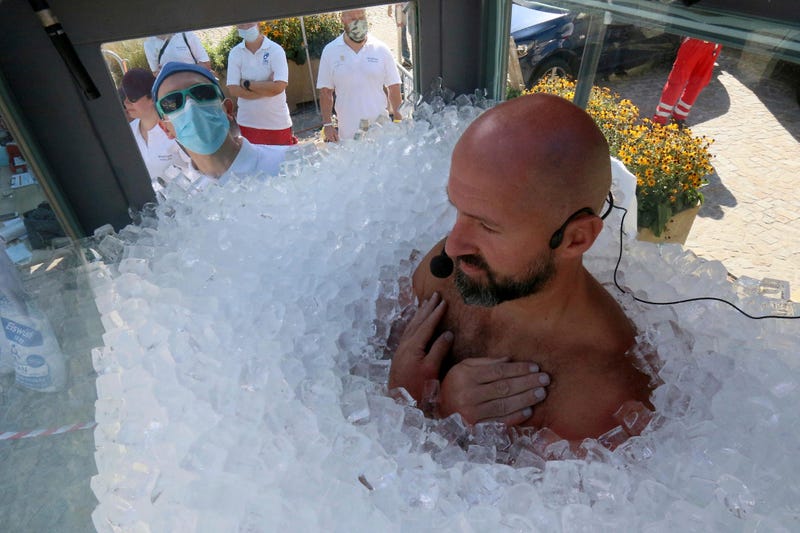 Photo credit CORRECTING NAME TO KOEBERL - Austrian ice swimmer Josef Koeberl is standing in a glass cabin filled with ice try to break the world record for a human to stay side an ice box in Melk, Saturday, Sept. 5, 2020. (AP Photo/Ronald Zak)
By The Associated Press

MELK, Austria (AP) — An Austrian man beat his own record for the longest full body contact with ice cubes on Saturday.

Josef Koeberl managed to stay 2 hours, 30 minutes and 57 seconds inside a custom-made glass box filled up to his shoulders with ice cubes. More than 200 kilograms (440 pounds) of ice cubes were needed to fill up the box, after Koeberl stepped inside wearing nothing but swim trunks.

In order to fight the “wave of pain” caused by the freezing temperatures, Koeberl says he was trying to focus on positive emotions.

“I’m fighting the pain by visualizing and drawing on positive emotions so I can dampen this wave of pain," Koeberl told reporters. "That way I can endure.”

A small crowd of people watched on as Koeberl beat his own record from 2019 by 30 minutes on the town square of Melk in Lower Austria.

After being taken out of the ice box by helpers he said that the sun felt “really great” on his back.

Koeberl is planning to beat his own record one more time — next year in Los Angeles. His team said that Koeberl's personal record is also the current world record when it comes to exposing the body to ice for as long as possible.

music
Ringo Starr’s grandson and Liam Gallagher’s son charged with assault, together
music
Someone has hit 100 million TikTok followers for the first time
music
Johnny Rotten admits to flea bites on 'my willy' from allowing squirrels inside his home
music
Billie Joe Armstrong of Green Day: 'Donald Trump is holding half of the country hostage'
music
Will The Weeknd be bandaged during his Super Bowl Halftime performance?
music
Guitar Center explains why they filed for Chapter 11 bankruptcy