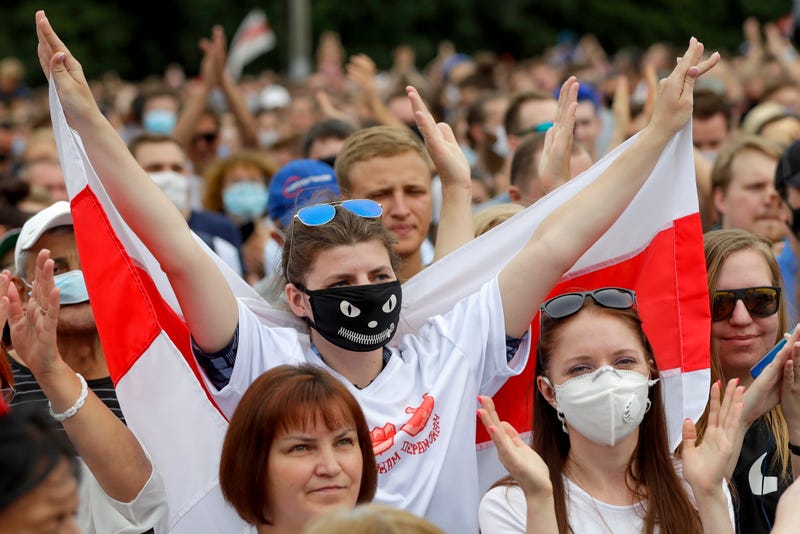 Photo credit FILE - In this file photo taken on Sunday, July 19, 2020, Belarusians, some of them wearing face masks to protect against coronavirus, attend a meeting in support of Svetlana Tikhanovskaya, candidate for the presidential elections, in Minsk, Belarus. Previously apolitical, Kseniya Milya was among those who flocked to campaign rallies of Sviatlana Tsikhanouskaya, a 37-year old ex-teacher and wife of a jailed opposition blogger, who is challenging Lukashenko in Sunday's vote. (AP Photo/Sergei Grits)

MINSK, Belarus (AP) — As Kseniya Milya's grandfather lay dying of COVID-19 at a hospital in Belarus' capital of Minsk, the country's authoritarian leader was blithely dismissing the pandemic as “psychosis,” and recommending an unusual remedy: Have a regular shot of vodka and work hard in the fields.

Like many other Belarusians angry with the government's cavalier approach to the pandemic, Milya joined large opposition protests ahead of Sunday's presidential vote in which President Alexander Lukashenko is seeking a sixth term. The outpouring of public discontent poses the most serious challenge yet to Lukashenko after 26 years in office.

Milya said her 86-year-old grandfather, Ivan Shelesny, believed Lukashenko and took no precautions as the pandemic swept through the ex-Soviet nation.

"(He) trusted Lukashenko and TV, who said that COVID-19 doesn’t exist, and he died,” said Milya, a 26-year-old movie producer. “That was a result of the government’s policy.”

“He was attending veterans' meetings and visiting street markets,” she added. "And he was greatly surprised when he tested positive.”

Milya's grandfather died of coronavirus-induced pneumonia at a hospital in March, after a week on a ventilator.

“On the day they called me from intensive care to say that my granddad has died of confirmed COVID-19, I switched on the TV and saw the president saying that no one has died of the virus in Belarus,” Milya told The Associated Press.

It wasn't until April that the government reported the country's first COVID-19 deaths.

Milya and her family were all infected, and couldn't attend the funeral. Her 46-year-old father spent a month on a ventilator and barely survived, and her mother-in-law has remained in intensive care since April.

“The government was refusing to recognize the virus' existence or provide assistance, wasting time,” she said.

She said when her father was hospitalized, no one bothered to test him for COVID-19. Only after a week did authorities do a CT scan and put him on a ventilator for 31 days.

As the pandemic engulfed the world, Lukashenko ignored the World Health Organization's call for a lockdown.

Instead, the 65-year-old former state farm director advised Belarusians to “kill the virus with vodka,” go to saunas and work in the fields to avoid infection. “Tractors will cure everybody!” he proclaimed.

Lukashenko has refused to impose any restrictions, making Belarus the only country in Europe to keep holding professional soccer games with fans in the stands while the outbreak was in full swing. Religious services and other mass gatherings continued unimpeded, and a massive military parade was held in May to mark the 75th anniversary of the Nazi defeat in World War II.

Last month, Lukashenko abruptly announced that he got the virus himself but had no symptoms and allegedly recovered quickly thanks to doing sports. He has staunchly defended the government response, claiming that extensive testing helped prevent the uncontrolled spread of the disease and arguing that a lockdown would have been deadly for the economy.

His approach, combined with a painful economic fallout from the global pandemic, has helped swell the opposition ranks ahead of the vote.

Previously apolitical, Milya was among the tens of thousands who flocked to campaign rallies for Sviatlana Tsikhanouskaya, a 37-year-old former teacher and the wife of a jailed opposition blogger who is challenging Lukashenko in Sunday's vote.

“The offer to use tractors and vodka was like spitting in people's faces,” Tsikhanouskaya told the AP in an interview. “That disrespectful, disdainful attitude ... had a strong impact at a time when people badly needed help amid the pandemic. And all they got was that boorishness.”

The country of 9.5 million has reported more than 68,500 confirmed infections and 580 deaths. Critics have accused authorities of manipulating the figures.

“No one, even the authorities themselves, trusts Belarus' official statistics," said Pavel Paleichik, an ambulance doctor from the western city of Lida who was handed a 7-day jail term and lost his job after complaining — at an opposition rally — about the lack of protective gear.

Paleichik claimed that authorities urged doctors to attribute COVID-19 deaths to other reasons.

“The situation is horrible. We lack protective gear, people have to wait for an ambulance for 3-4 hours,” Paleichik told the AP. “I didn't want to tolerate that and keep silent like others. And I faced harsh reprisals from the authorities because of that.”

While the authorities have sat back, a broad volunteer movement has spread across the country to collect money for doctors and to help expand public awareness of the pandemic.

"The outbreak has shown that the Belarusians are capable of strong solidarity,” said Andrei Tkachev, a coordinator for the BYCOVID-19 volunteer group that has collected money and protective gear for medical workers.

The volunteers have collected $350,000 for the hospitals and provided medical workers with 450,000 respirators, hazmat suits and other protective gear.

“Everybody is equal in the face of the coronavirus, we have offered protective means to the military and police as well," Tkachev said.

Authorities in Belarus have seen the volunteer movement as a challenge. Andrei Strizhak, one of the leaders of BYCOVID-19, had to flee to Ukraine with his family after receiving threats.

“The coronavirus has become an impulse that triggered massive discontent with the government, and specifically with Lukashenko,” Tkachev said. “Many people have grown tired of being afraid and keeping silent.”

Although Belarus didn't impose a lockdown, its economy has still been badly battered by the global pandemic.

Russia, which buys the bulk of Belarus' exports, is in recession, and other export markets also have shrunk. Amid economic disputes, Moscow this year withdrew a steep discount on its oil supplies, depriving Lukashenko's government of an estimated $700 million in annual revenues from exporting oil products made of cheap Russian crude.

“I have grown up under Lukashenko, but increasing poverty, stagnation and helplessness in the fight against the coronavirus have undermined trust in his government," said Egotin, who makes the equivalent of $415 a month. "Everybody has got sick of him.”