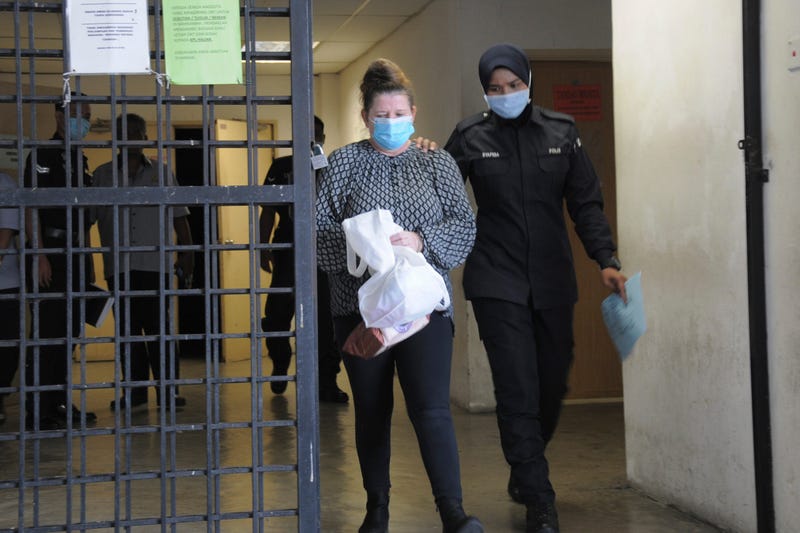 ALOR SETAR, Malaysia (AP) — A British woman accused of stabbing her husband to death at their Malaysian resort home avoided the gallows and was sentenced to 42 months in jail on Monday after she pleaded guilty to a lesser charge.

Lawyer Sangeet Kaur Deo said prosecutors reduced the murder charge against Samantha Jones, 51, to culpable homicide, which is murder without intent, after the defense appealed to the attorney-general's office.

A conviction for murder carries a mandatory death sentence by hanging.

Wearing handcuffs and a surgical mask, Jones was earlier escorted by police into the courthouse in Alor Setar in northern Kedah state for the start of the trial. She was charged nearly two years ago after police found a blood-stained kitchen knife in the couple’s home where John William Jones was found dead on Oct. 18, 2018.

Police have said Jones confessed she stabbed her husband in the chest during a heated argument. The couple moved to tropical Langkawi island 11 years ago under the Malaysia My Second Home program, which gives foreigners long-stay visas.

The lawyer said the couple, who had been married for 17 years, were devoted to each other but Jones was struggling with physical violence by her husband.

“Unfortunately Samantha found herself at the receiving end of abuse. She supported John through various therapies to address certain problems that he had, none of which worked obviously, until that unfortunate night when things took a turn for the worst," Kaur said.

“She has accepted the fact that she needs to serve the sentence. She acknowledged the fact that a life is lost and I think she is looking forward to her own recovery because this was indeed a traumatizing event for her," the lawyer added.

Kaur said Jones, who has spent 20 months in detention, could be released as early as the end of next year with one-third off the sentence for good behavior.