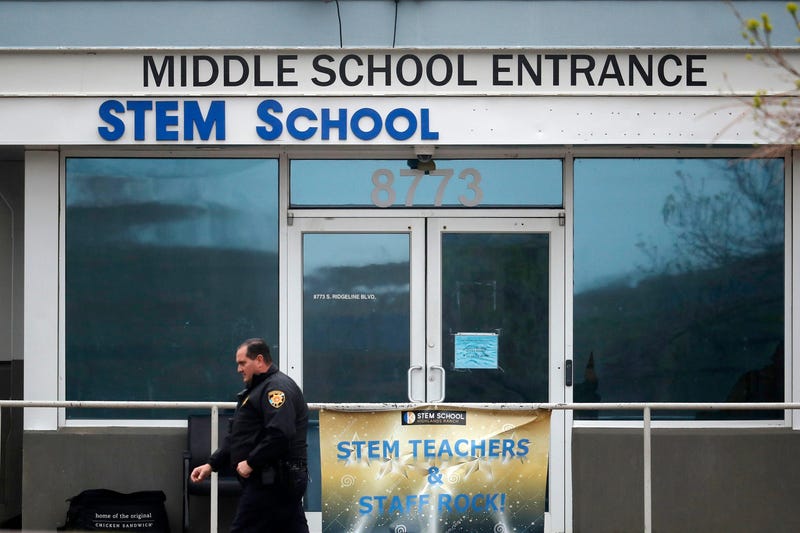 Photo credit FILE - In this May 8, 2019, file photo, a Douglas County, Colo., Sheriff's deputy walks past the doors of the STEM Highlands Ranch school in Highlands Ranch, Colo. The younger of two students charged in the shooting at the suburban Denver school in the spring of 2019 is scheduled to be sentenced Friday, July 24, 2020. The decision will come after a hearing in which those impacted by the shooting, including the parents of a student who died trying to stop the attack at STEM School Highlands Ranch, will speak. (AP Photo/David Zalubowski, File)

A teen who told authorities that he launched a fatal shooting attack on his suburban Denver school last year because he wanted them to experience trauma like that he had experienced was sentenced on Friday to life in prison with the possibility of parole after about two decades behind bars.

Alec McKinney apologized to the parents of Kendrick Castillo, who was killed as he tried to stop the attack at STEM School Highlands Ranch, and to the other students wounded as well as traumatized by the attack.

“I will never repeat these actions ever again because the harm I caused is truly too much for anyone to bear,” he said as he seemed to choke back tears and his voice cracked.

McKinney, 17, is the younger of the two students charged in the May 7, 2019, shooting. He was 16 at the time of the shooting so, even though he was prosecuted as an adult, he could be paroled after about 25 years in prison no matter what sentence he received unlike his alleged conspirator, Devon Erickson, who was 18 at the time.

Erickson, 19, has pleaded not guilty to all the same charges McKinney originally faced in the shooting. His lawyers have portrayed McKinney as the ringleader who pressured Erickson to participate. He is scheduled to go on trial in late September.

He will not face the death penalty if he is convicted. Colorado became the 22nd state to abolish the death penalty this year but Erickson could have still been eligible for it because the shooting happened before that law was passed. While Castillos' parents supported pursing capital punishment, District Attorney George Brauchler decided not to, noting that Erickson's lawyers could have argued against it because of his age, lack of a criminal history and other mitigating factors.