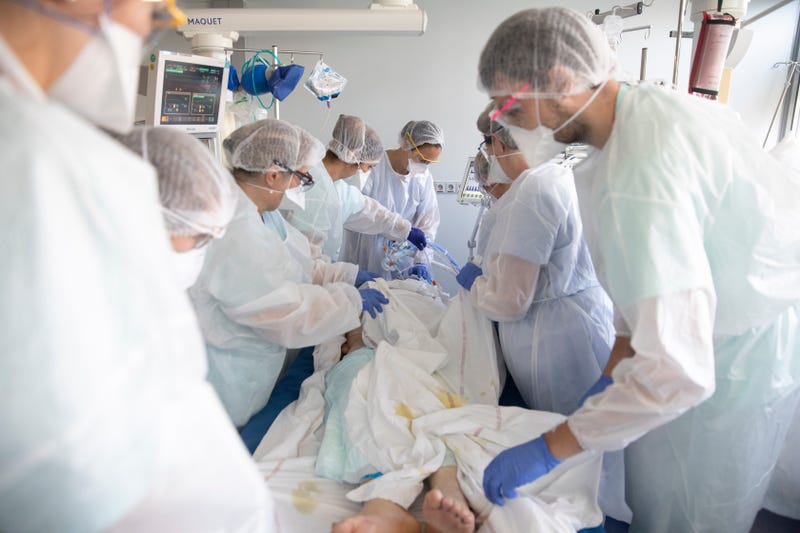 Photo credit Medical workers tend a patient affected with the COVID-19 in the Nouvel Hospital Civil of Strasbourg, eastern France, Tuesday, Sept.15, 2020. France is grappling with the double headache of trying revive its COVID-battered economy while also curbing the steady climb in infections spread during summer months when vacationers let their guard down and picked up by increased testing. (AP Photo/Jean-Francois Badias)
By The Associated Press

LE PECQ, France (AP) — France will reward foreign health care-workers and other front-line personnel who distinguished themselves in the fight against COVID-19 by fast-tracking citizenship applications for those who want to become French.

Instructions this week from the Interior Ministry, seen by The Associated Press, ordered regional officials to prioritize naturalization requests from foreigners who "actively participated in the national effort, with devotion and courage” against the epidemic that has killed nearly 31,000 in France.

Signed by Marlène Schiappa, the ministry official in charge of citizenship issues, the circular says foreigners who are eligible can be naturalized after just two years of residency in France, instead of the usual minimum of at least five years, because of the “important services” they rendered. It specifically mentioned health care workers.

The circular did not say many people might benefit from the decision.

“The recognition, by France, of those who spared neither their efforts nor courage is essential to salute an exceptional commitment,” Schiappa wrote.

The minister on Tuesday visited an office that handles naturalization dossiers.

“Cash register workers, health carers, child-care workers ... They involved themselves with courage and showed their attachment to the Republic!” she tweeted.

As France's government, seeking to revive the COVID-battered economy, exhorts people to adapt to life with the virus, it is also grappling with a surge of infections, picked up by greatly increased testing and spurred by people lowering their guard during summer vacations. Another 7,852 infections were announced Tuesday, and 37 virus-related deaths, which took the national total to 30,999.

A leading French engineering school announced Tuesday it is shutting down in-person classes and moving all teaching online because of a large COVID-19 outbreak, a move that comes just two weeks after classes resumed.

The National Institute of Applied Sciences in the southwestern city of Toulouse said 127 students tested positive and 327 others awaiting test results have symptoms or are possible contact cases.

A school spokeswoman said student parties, banned on campus but still held off the premises, appear to have contributed to the new infections.

Follow AP coverage of the virus outbreak at http://apnews.com/VirusOutbreak and h ttps://apnews.com/UnderstandingtheOutbreak