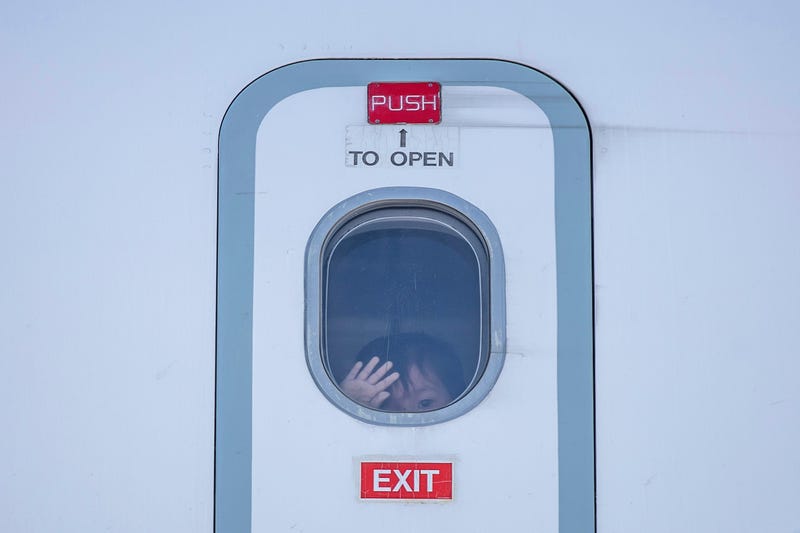 Photo credit A child looks out of a window of a plane as a group of migrant children with health issues board a plane to Germany, at Athens International Airport, Friday, July 24, 2020. German Foreign Heiko Maas, on a visit to Athens this week, said his country would follow through in its pledge to assist Greece with the relocation of unaccompanied minors and other children at refugee camps in Greece. (AP Photo/Petros Giannakouris)
By The Associated Press

BERLIN (AP) — Greece transferred 18 children with medical needs and their close relatives who were living in overcrowded migrant camps to Germany on Friday, authorities said.

A flight that arrived at Kassel airport in central Germany from Athens brought in 83 people in total, who were to be shared out among German states, the German interior ministry said. Fifty-four of them are from Afghanistan; the rest were Syrians, Iraqis, Palestinians and Somalis. The families range in size from two to eight people.

The transfer is part of a wider effort to get hundreds of vulnerable children out of camps on the Greek islands. Germany says it has agreed to take in a total of 243 children “who need medical treatment” from Greece.

In April, a group of 47 unaccompanied children evacuated from the Greek camps landed in Germany. Luxembourg and Portugal also have taken in minors from Greece, and other European Union countries have agreed to in principle.