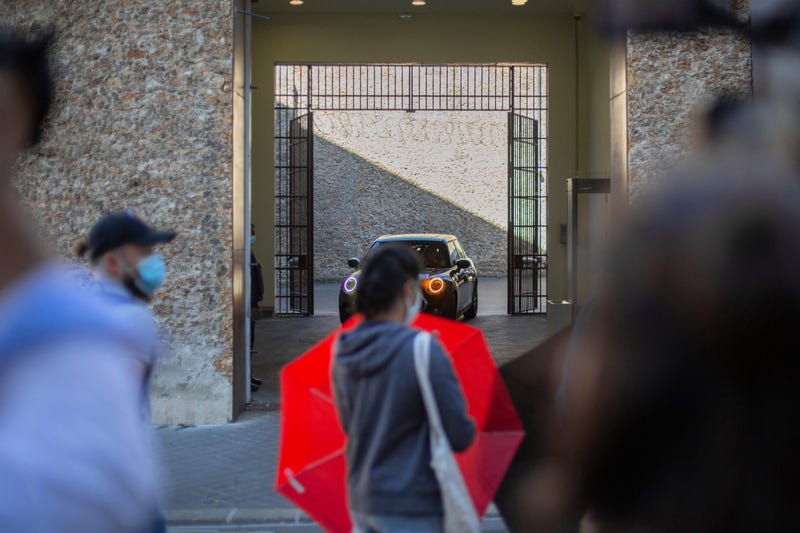 Photo credit A car believed to be carrying a longtime chief of the violent Basque separatist group ETA known by the alias Josu Ternera drives out La Sante Prison Thursday, 30 July, 2020, in Paris, France, to be held under house arrest with an electronic monitoring bracelet. Josu Ternera was arrested in May 2019 after 17-years on the run. ETA killed more than 850 people during its decades-long violent campaign to create an independent state in northern Spain and southern France. (AP Photo/Rafael Yaghobzadeh)

PARIS (AP) — A longtime chief of the violent Basque separatist group ETA was freed Thursday from a French prison, swapping a jail cell for house arrest in Paris with an electronic monitoring bracelet.

José Antonio Urruticoetxea Bengoetxea, known by the alias Josu Ternera, will only be able to leave his residence on pre-agreed days and at hours determined by the Paris Court of Appeal. It ruled on Wednesday that he should be released from Paris' La Santé prison. He was freed Thursday morning.

Supporters opened umbrellas to shield from view the car in which Ternera is thought to have been driven away.

As well as ordering the electronic tracking bracelet and house arrest at his Paris residence for a minimum of six months, the court also banned Ternera from leaving mainland France.

ETA, whose initials stand for “Basque Homeland and Freedom” in the Basque language, killed more than 850 people during a decades-long violent campaign to create an independent state in northern Spain and southern France.

The militant group gave up its arms in 2017 and then disbanded after being weakened by a sustained police effort to dismantle its operations and arrest its leaders.

Ternera's son, Egoitz Ternera, said being out of prison will allow his father to better prepare his defense against French and Spanish legal proceedings still outstanding.

“This is a new phase in the judicial process. The presumption of innocence is taken into account, he will be able to defend himself as a free man,” the son said.

In October, the Paris court will weigh appeals against sentences for terrorism and other charges handed down to Ternera when he was on the run.

He also faces Spanish efforts to extradite him and an outstanding European arrest warrant.

His son said that Ternera is in fragile health having undergone surgery for a condition he didn't elaborate on.

“There was a five-month wait before he was operated on. That operation should have been done urgently after the arrest. Now, he will be able to get the treatment adapted to his condition,” he said. "We can only be relieved by this outcome”.

Ternera was arrested in a French Alps town in May 2019 after 17 years on the run. He had been the most wanted ETA member since 2002.