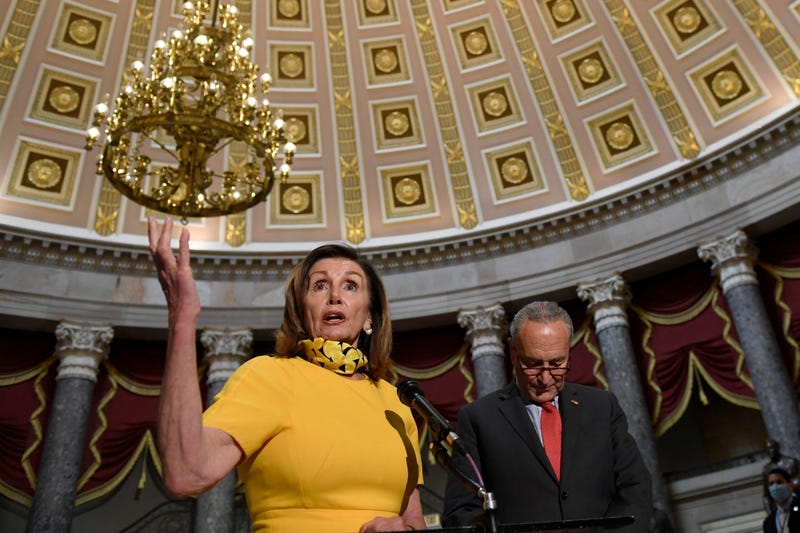 WASHINGTON (AP) — A key Senate Republican said Tuesday that he supports an increase in the food stamp benefit as part of a huge coronavirus relief bill, adding that an agreement on that issue could lead to further overall progress on the legislation, which remains stalled despite days of Capitol negotiations.

Senate Agriculture Committee Chair Pat Roberts, R-Kan., said Tuesday that “you can make an argument that we need some kind of an increase" in food stamps and that he's raised the topic with Majority Leader Mitch McConnell.

“They are taking a look at it and I think we can get a positive result," Roberts told The Associated Press. “If we can get a breakthrough on that, it could lead to some other stuff.”

The food stamp issue — left out of earlier relief bills — is a top priority for House Speaker Nancy Pelosi, among other powerful Democrats, who have passed a 15% increase in the food stamp benefit as part of their $3.5 trillion coronavirus relief bill.

The overall talks are going slowly, though urgency is growing among Senate Republicans, several of whom face tough election races and are eager to deliver a bill before heading home to campaign this month.

Multiple obstacles remain, including an impasse on extending a $600-per-week pandemic jobless benefit, funding for the U.S. Postal Service and aid to renters facing eviction. Democratic negotiators spoke of progress after meeting with administration officials on Monday but Republicans remain privately pessimistic. The two sides are expected to resume talks again Tuesday afternoon.

Neither side has budged from their positions, with Democrats demanding an extension of the $600-per-week supplemental unemployment benefit that's credited with propping up the economy. Republicans have yet to offer any aid to states to prevent furloughs, layoffs and cuts to services. Both will have to compromise before a deal can be agreed to.

“The $600 unemployment insurance benefit is essential because there are no jobs to go back to,” House Democratic Caucus Chair Hakeem Jeffries of New York said on MSNBC on Tuesday morning. “We've got to help out everyday Americans. That's a line in the sand.”

Senate Republicans facing reelection in this fall's turbulent political environment are among those most anxious for an agreement. Sen. John Cornyn, R-Texas, said Monday that the chamber should not go on recess without passing the huge relief measure, and Sen. Lindsey Graham, R-S.C., offered a jobless benefit proposal that's more generous than a pending GOP alternative. Both are facing closer-than-hoped reelection bids in states that should be easy holds for Republicans.

Treasury Secretary Steven Mnuchin, a lead negotiator for President Donald Trump, said Monday that “we continue to make a little bit of progress" and that the administration is not insistent on a small-bore approach centered on extending the supplemental unemployment benefit and leaving other items for later. A GOP move to advance a slimmed-down relief package has been a recent point of conflict, with Democrats insisting there must be a comprehensive deal.

“We’re open to a bigger package if we can reach an agreement,” Mnuchin said after Monday's two hour meeting with Democrats.

Speaking to reporters after Monday's session, Democratic negotiators pressed the case for additional food aid, funding for the Postal Service, and the $600-per-week jobless benefit that lapsed last week. The benefit has helped sustain consumer demand over recent months as the coronavirus has wrought havoc. Pelosi, D-Calif., wants to extend it through January at a $400 billion-plus cost, while Republicans are proposing an immediate cut to $200 and then replacing the benefit with a cumbersome system that would attempt to provide 70% of a worker's “replacement wage.”

“It was productive, we’re moving down the track. We still have our differences, we are trying to have a clearer understanding of what the needs are, and the needs are that millions of children in our country are food insecure," Pelosi said.

On the Senate floor, McConnell, R-Ky., re-upped his complaint that Democrats are taking too tough a line. McConnell is not a direct participant in the talks but is likely to be an important force in closing out any potential agreement.

Most members of the Democratic-controlled House have left Washington and won't return until there is an agreement to vote on, but the GOP-held Senate is trapped in the capital.

“I can’t see how we can go home and tell people we’ve failed, so I think that’s going to be a lot of pressure on everybody to come up with something," said Cornyn, a close ally of McConnell. "It really is a matter of will. It’s not a matter of substance at this point. This is just a painful period between people finally deciding OK, we want a deal, and then what that deal will ultimately look like.”

Areas of agreement already include another round of $1,200 direct payments and changes to the Paycheck Protection Program to permit especially hard-hit businesses to obtain another loan under generous forgiveness terms.

On unemployment, Pelosi said she'd consider reducing the $600 benefit for people in states with lower unemployment rates. Republicans want to cut the benefit to encourage beneficiaries to return to work and say it is bad policy since it pays many jobless people more money than they made at their previous jobs.

Graham is among the Republicans who most aggressively protested the $600 benefit when it passed in March, But on Monday, he said that he wants to replace it with a system ensuring 100% of replacement wages, meaning the government would try to pay people as much to not work as to work.

The House passed a $3.5 trillion measure in May, but Republicans controlling the Senate have demanded a slower approach, saying it was necessary to take a “pause” before passing additional legislation. Since they announced that strategy, however, coronavirus caseloads have spiked and the economy has absorbed an enormous blow.

The Senate GOP draft measure carries a $1.1 trillion price tag, according to an estimate by the Committee for a Responsible Federal Budget. Republicans have not released any estimates of their own.