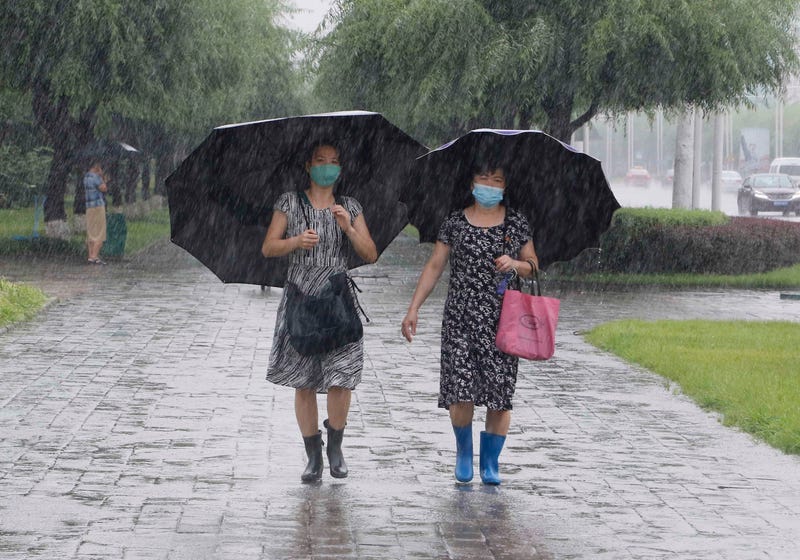 It’s rare for Kim to visit a flood-stricken site. The last time state media reported about Kim’s such visit was in September 2015, when he inspected recovery work at a flood-hit northeast city, according to Seoul's Unification Ministry.

Kim’s latest visit could be seen an effort to bolster an image of a leader caring about public livelihoods at a time when the North’s economic woes are believed to have worsened due to the coronavirus pandemic that forced it to close its border with China, its biggest trading partner, in January. Extensive flooding would add to the North’s economic troubles.

The Korean Central News Agency said Friday Kim inspected a town in North Hwanghae province where a water levee gave way due to the heavy rains and rainstorm.

It said the levee break left more than 730 single-floored houses and 600-odd hectares of rice field inundated and 179 housing blocks destroyed in Unpha County. KCNA said no human casualties have been reported.

KCNA said Kim visited the scene and ordered shelters arranged for displaced people and residents to be supplied with food grain from his own reserves.

Kim also said officials will be dispatched to direct works to build 800 model houses in the town and that the army will be mobilized to rebuild roads and other infrastructure there with local residents.

Friday’s KCNA dispatch didn’t mention possible flood-related damages in other parts of North Korea. It also didn’t say when Kim’s visit was made.

In Seoul, Unification Ministry spokeswoman Cho Hyesil told reporters that South Korea maintains its policy to push for humanitarian cooperation with North Korea on issues that are not political such as natural disasters. She said South Korea is monitoring flood damages in North Korea but didn’t say whether South Korea would offer aid to the North.

Relations between the Koreas remain strained amid a protracted deadlock in a U.S.-led diplomacy aimed at convincing North Korea to abandon its nuclear program in return for economic and political benefits.

South Korea has also received torrential rains in recent days. The Ministry of the Interior and Safety said in a report Friday that the Aug. 1-6 rainfall left 17 people dead and 10 others missing in landslides, floods and other incidents in South Korea.