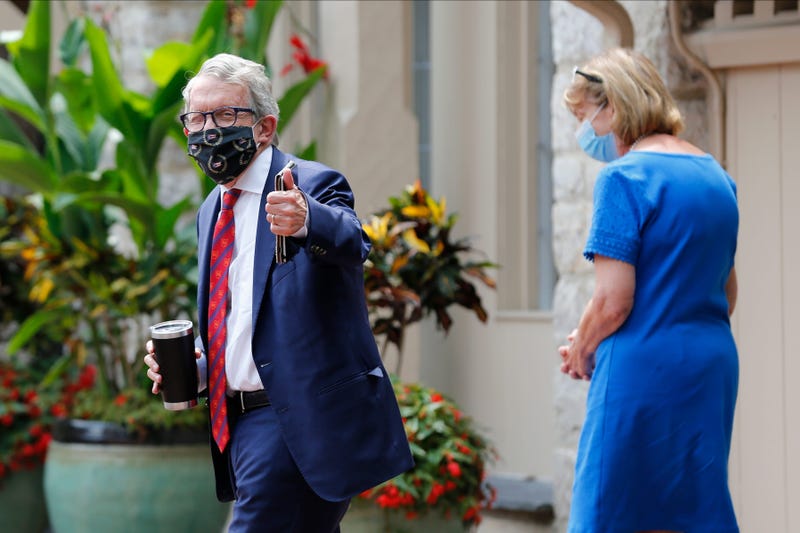 Photo credit Ohio Governor Mike DeWine, left, and his wife Fran, walk into their residence after he tested positive for COVID-19 earlier in the day Thursday, Aug. 6, 2020, in Bexley, Ohio. (AP Photo/Jay LaPrete)

COLUMBUS, Ohio (AP) — The fourth COVID-19 test result for Ohio Gov. Mike DeWine came back negative Saturday after he received conflicting positive and negative results two days before, ahead of a scheduled meeting with President Trump.

The governor and first lady, Fran DeWine, were tested at Ohio State University “out of an abundance of caution” following a rollercoaster day Thursday that began with DeWine receiving a positive test result followed by two negatives. The governor announced the negative results on Twitter on Saturday afternoon, thanking “everyone who sent along good wishes.”

The Republican governor had to take a COVID-19 test Thursday morning in Cleveland as part of White House protocol for anyone scheduled to come in contact with the president. DeWine was administered a rapid point-of-care antigen test at a mobile testing site facilitated by the Republican National Committee, according to DeWine spokesperson Dan Tierney.

DeWine then headed to meet Trump at the airport to greet him.

“I was fully expecting to see the president that morning,” DeWine said in a press conference Friday. “But as we were driving to the airport to meet him, I was called and told about my positive result.”

DeWine was immediately driven back to Columbus, where the governor, his wife and four members of his staff took another test, a polymerase chain reaction test, at Ohio State University Wexner Medical Center.

That test is the most commonly used test in the country and is considered the gold standard by medical professionals. More than 1.3 million Ohioans have been tested with it.

The result were checked twice, both negative.

The conflicting results underscore the problems with both kinds of tests and are bound to spur more questions about them. Many people in the U.S. can’t get lab results on the more accurate version for weeks, rather than the few hours it took the governor to find out.

Farnoush Amiri is a corps member for the Associated Press/Report for America Statehouse News Initiative. Report for America is a nonprofit national service program that places journalists in local newsrooms to report on undercovered issues.