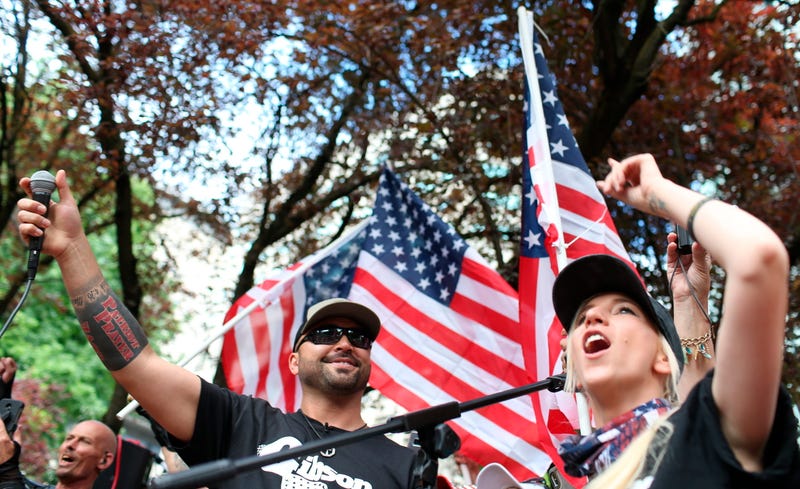 Photo credit FILE - In this June 30, 2018, file photo, Joey Gibson, left, leader of Patriot Prayer, participates in the group's rally in Portland, Ore. The man who was fatally shot in Portland on Saturday, Aug. 29, 2020, as supporters of President Donald Trump skirmished with Black Lives Matter protesters was a supporter of a right-wing group called Patriot Prayer and a good friend of its founder, Gibson. (Mark Graves/The Oregonian via AP, File)
By The Associated Press

PORTLAND, Ore. (AP) — The man who was fatally shot in Portland, Oregon, as supporters of President Donald Trump skirmished with Black Lives Matter protesters was a supporter of a right-wing group called Patriot Prayer, which doesn't have a big national footprint but is well known in the Pacific Northwest.

Patriot Prayer's founder, Joey Gibson, has held pro-Trump rallies repeatedly in Portland and other cities since 2016. The events have drawn counterprotesters from around the region and had heightened tensions in Portland long before Black Lives Matter demonstrators began nearly 100 days of nightly protests over the police killing of George Floyd.

The shooting victim was identified by Gibson as Aaron “Jay” Danielson of Portland. Photos taken of the body show he was wearing a Patriot Prayer hat. Police have released few details and pleaded with the public on Sunday to come forward with any information about the shooting.

Danielson also went by the name Jay Bishop, according to a statement on Patriot Prayer's Facebook page.

Gibson, a one-time Senate candidate, founded Patriot Prayer in 2016. In past interviews with The Associated Press, Gibson has said he and his group are not a hate group and simply want to exercise their freedom of speech without interference from left-wing groups or protesters.

The group became a prominent presence in Portland in the summer of 2017, when Gibson organized a large rally in the city less than a week after a white supremacist fatally stabbed two men who had come to the defense of two Black teenagers — including one wearing a Muslim head-covering — on a light-rail train.

The defendant Jeremy Christian, who was sentenced to two consecutive life sentences earlier this year, had attended a Patriot Prayer rally several months before, but was kicked out by organizers for flashing Nazi hand signs.

Patriot Prayer held several other marches and rallies in Portland in 2017 and 2018 and Gibson was arrested for felony rioting last summer on a charge related to a brawl that broke out between the group's supporters and left-wing activists at a pub after a May Day march in the city.

He has pleaded not guilty; a judge this week denied his motion for a change of venue at trial, according to court records.

In a video that was live-streamed on Facebook last summer after he was released on bail, Gibson urged his supporters to “show up one hundred-fold” at a rally scheduled for the following day in Portland that was organized by the Proud Boys — a group that's been designated as a hate group by the Southern Poverty Law Center — and other right-wing groups such as the Three Percenters and the American Guard.

Gibson told AP he was again present late Saturday in Portland when a caravan of about 600 Trump supporters drove through the city, sparking clashes in the streets with Black Lives Matter demonstrators.

Gibson did not appear to have a part in organizing the caravan, however. In a video on Twitter, organizer Alex Kyzik said before the rally that those who attended should not openly carry their weapons.

The same person organized a similar rally in Boise on Aug. 22. There were no public records available for a man named Alex Kyzik in Boise, Idaho, and it was unclear if that was his real name.

Videos taken before the shooting show people squaring off for fist fights and Trump supporters firing bear spray and paintballs at counterprotesters, who in return throw objects at the trucks and attempt to block their progress by standing in intersections.

Mayor Ted Wheeler said when Trump supporters want to come to Portland to rally, there is nothing the city can do to prevent them.

“It’s no secret to anybody that I personally am not a Trump supporter, but I will defend to the death the right of a Trump supporter to stand outside my apartment and non-violently demonstrate in support of their candidate. That’s core to American democracy,” Wheeler said.

"So when people say they want to come into the city in a caravan supporting their presidential candidate, we cannot tell them no. They have constitutional rights to be here -- rights, which I embrace and support. The violence, however, is the problem.”