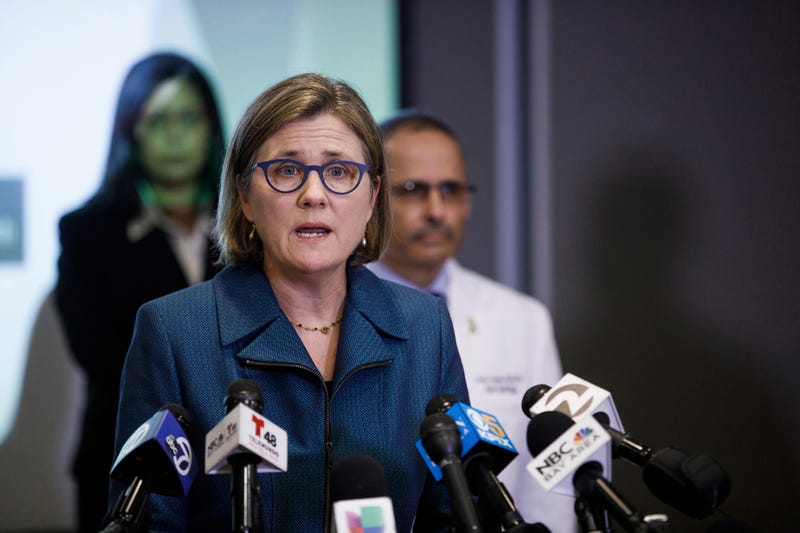 SAN JOSE, Calif. (AP) — Authorities say a California community college instructor with ties to the far-right, anti-government “boogaloo" movement is in custody following his arrest for allegedly sending more than two dozen threatening letters to a county health officer during the coronavirus pandemic.

Viarengo has been charged with felony counts of stalking and harassing a public official. He has not entered a plea. His bail was revoked and he remains in jail, the station reported.

Some in the “ boogaloo ” anti-government movement have taken to protesting pandemic-related public health restrictions, carrying firearms and warning of violence and saying the directives by states and cities are a violation of their rights. The extremist movement uses an '80s movie sequel as a code word for a second civil war.

Dr. Sara Cody has been one of the nation's most visible official proponents of stay-at-home orders, social distancing and wearing masks, which has led to threats and even demonstrations at her home.

She has previously acknowledged receiving threats, telling the San Jose Mercury News in July, “we’ve all taken more heat than we usually take. I try as much as possible to keep my head down.”

The letters were sent from April 8 to July 29 and some contained “boogaloo" slogans and imagery, according to the police report reviewed by the television station.

“I’m glad you are getting threats,” the person wrote in a June letter, according to the police report. “I posted your residence everywhere I could; I hope someone follows through.”

The report indicates that on July 29, detectives tracking Viarengo watched as he drove a black Tesla Model 3 to a mailbox and dropped a letter inside. The letter was addressed to Dr. Cody and mocked her handling of the pandemic. He was arrested a month later.

“At this time we have allegations,” Salfen said. “Allegations are not facts."

In a message to faculty and students on Tuesday, the superintendent and president of the Gavilan Joint Community College District said the charges are not related to Viarengo's work there.

“As members of the college community, however, we are shocked and saddened by what took place, and will cooperate with law enforcement fully if it is required," said Kathleen A. Rose in a message provided to The Associated Press.

In the San Francisco Bay Area, two men allegedly affiliated with the “boogaloo” movement were charged earlier this year in the separate killings of a federal security officer in Oakland and a Santa Cruz County sheriff's sergeant.

Viarengo is also accused of sending harassing letters with slogans and imagery to the Santa Cruz County Sheriff’s Office and to the widow of the sergeant.