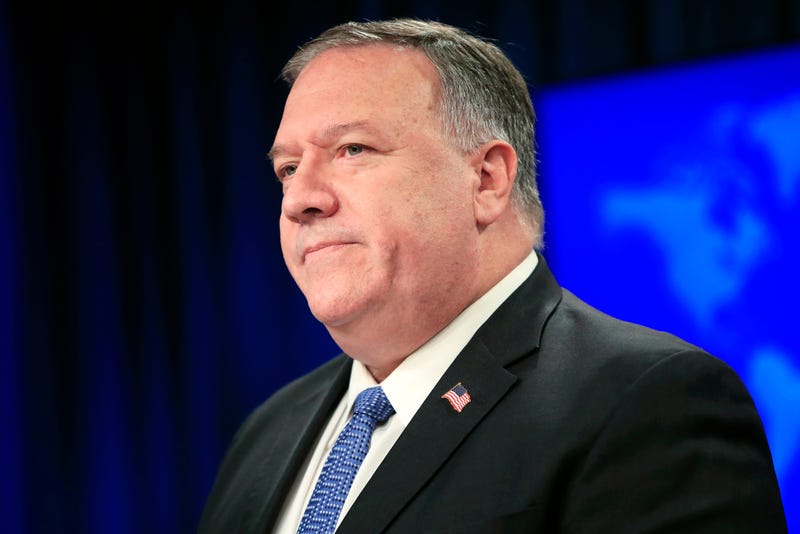 WASHINGTON (AP) — Secretary of State Mike Pompeo on Friday rejected congressional subpoenas issued for him and for the State Department to provide information and testimony to lawmakers about two politically charged developments. The refusals set the stage for an escalation in the confrontation between the State Department and the Democratic-controlled House ahead of November's elections.

In letters sent to the House Foreign Affairs Committee, Pompeo and the State Department’s acting legislative affairs chief said they had no intention of complying with the subpoenas. They said the subpoenas were politically motivated, without merit, and unnecessary as the information and testimony could be otherwise obtained. The letters were obtained by The Associated Press shortly after they were sent to Capitol Hill.

While congressional subpoenas are legally binding, the Trump administration through various Cabinet agencies has repeatedly refused to comply with House demands with little consequence. There was no immediate response to the letters from the committee, although the panel later announced it was seeking testimony from another official in an unrelated matter.

In one letter, Pompeo said committee chairman, Rep. Eliot Engel of New York, was out of line in issuing the subpoenas, which he said were “outrageous” and ignored the State Department's good faith efforts to answer questions about the firing of the department's inspector general and the provision of Ukraine-related documents to Republican-controlled Senate committees.

Engel had issued the subpoenas on July 31 and Aug. 3, complaining that Pompeo and the State Department were “stonewalling” repeated requests for information on both matters.

The first subpoena demanded that the State Department turn over to Engel's committee copies of thousands of pages of documents he said the department had given to the Senate regarding former Vice President Joe Biden as well as his son, Hunter, for his work for a gas company in Ukraine while his father was vice president.

It also asked for internal department emails about responding to Congress. It said Pompeo had delivered more than 16,000 pages of records to the Senate but refused to send the same materials to the Democrat-led House.

In response, the State Department’s acting head of legislative affairs, Ryan Kaldahl, said the agency was not obliged to provide the documents to any committee not conducting its own investigation into the matter. He suggested that Engel's committee seek copies from its Senate counterparts.

The second subpoena demanded the testimony of four senior State Department officials about the firing in May of department Inspector General Stephen Linick, which Democrats have alleged came in retaliation for probes the watchdog was conducting into Pompeo. Pompeo has denied knowledge of any investigation into his own conduct.

In rejecting that subpoena, Pompeo said in a letter to Engel that most of the officials in question, including the Under Secretary of State for Management Brian Bulatao and others, were prepared to be interviewed voluntarily and repeated that offer.

“Mr. Bulatao and the other requested witnesses will appear and unambiguously refute your baseless accusations and provide full transparency before the elected representatives of the American people,” Pompeo wrote.

"Furthermore, let me express how outrageous it is for you to suggest that the depart,ent is ‘stonewalling’ any investigation into the president’s replacing of Steve Linick,” he wrote, citing at least four offers for Bulatao and others to appear before the committee.

Congressional aides have said those offers were unacceptable because they were contingent on dropping other avenues of inquiry.

Shortly after the letters were sent, Engel announced he was seeking testimony in an unrelated matter from the U.S. ambassador to Britain, Robert “Woody” Johnson on Sept. 30. Johnson is alleged to have tried to weigh in with British officials to move the British Open golf tournament to one of Trump's resorts and also is accused of inappropriate racist and sexist behavior.

This is not the first time Pompeo has rebuffed a House subpoena. He did not comply with a subpoena to provide documents during the House’s impeachment inquiry into Trump ast year, and several other Trump administration officials refused to testify in that probe.

The administration's record of complying with subpoenas is poor and has left congressional Democrats flustered with little recourse except in the courts.

The House Judiciary Committee sued former White House Counsel Donald McGahn for his refusal to testify about former special counsel Robert Mueller’s Russia report in April 2019, and that case has been tied up in courts. On Friday, an appeals court said that the committee can make the claim in court, reversing an earlier court decision.

While the decision was good news for the committee, the matter won’t be resolved any time soon. One of the dissenting judges in that case noted that the House session ends Jan. 3, and “the chances that the committee hears McGahn’s testimony anytime soon are vanishingly slim.”