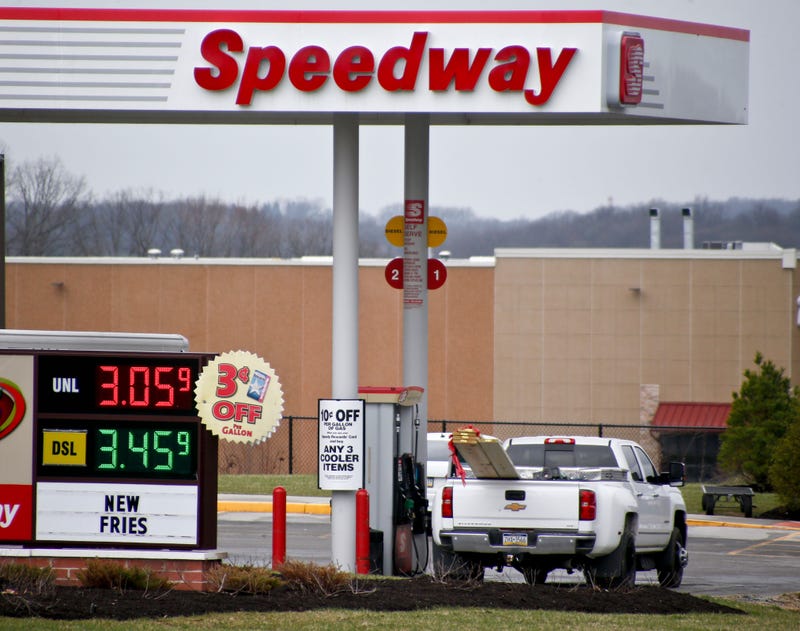 Photo credit FILE - In this photo made on Wednesday, April 25, 2018, the prices for regular gas and diesel are posted at a Speedway station in Zelienople, Pa. The $21 billion sale of Speedway gas stations buys Marathon Petroleum some breathing room as the global pandemic continues to punish the energy sector. Wall Street focused on the sale to 7-Eleven over the weekend, rather than the huge losses the company posted Monday, Aug. 3, 2020 with a lack of demand for fuel leading to refinery shutdowns. (AP Photo/Keith Srakocic, file)
By The Associated Press

Wall Street focused on the sale to 7-Eleven over the weekend, rather than the huge losses the company posted Monday, with a lack of demand for fuel leading to refinery shutdowns.

The deal comes just two days after Marathon announced the idling of refineries in New Mexico and California.

The sale bolsters Marathon's cash reserves after it posted an $868 million second-quarter loss. Marathon will use the proceeds to reduce debt and pay dividends to shareholders.

A lot of cash-starved companies have slashed dividends to ride out the pandemic, a more difficult proposition in the energy sector, where investors take a regular dividend as a given.

“We think the dividend is safe,” said Citi analyst Prashant Rao, who believes the cash infusion will provide some debt cushion to the Findlay, Ohio, company.

The all-cash sale is expected to close in the first quarter of 2021 and comes with a 15-year fuel supply agreement for 7.7 billion gallons per year for its stations.

The companies did not say how many Speedway stations were included in the agreement. Marathon lists more than 10,000 U.S. locations under Marathon, Speedway and Arco signs.

U.S. crude prices have plummeted 33% this year in the outbreak. While that would lower input costs for refiners like Marathon, gasoline demand has fallen in tandem as businesses and households cut travel.

“Despite seeing some recovery during the quarter, demand for our products and services continues to be significantly depressed, particularly across the West Coast and Midwest," said CEO Michael Hennigan.

Gasoline prices surged over the past three months as states lifted COVID-19 restrictions, but now infections in those re-opened states have begun to surge as well, from California to Florida.

On a per-share basis, Marathon lost $1.33 compared to earnings of $1.73 per share for the same period last year, when it had $1.1 billion in adjusted net income. Analysts surveyed by FactSet were expecting a loss of $1.73 per share.

Revenue was $15.2 billion, about half of what it earned in the same quarter last year, and well short of what Wall Street projections.