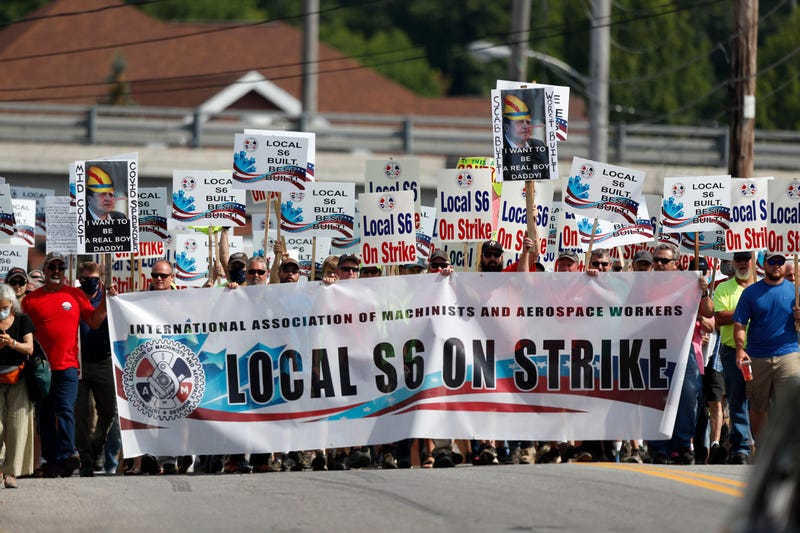 Photo credit FILE - Striking Bath Iron Works shipbuilders march in solidarity, Saturday, July 25, 2020, in Bath, Maine. The union representing striking production workers says a tentative agreement was reached with Navy shipbuilder Bath Iron Works to end a strike that stretched for more than a month during a global pandemic. The agreement announced on Saturday, Aug. 8, will be put forth to the 4,300 members of Machinists Local S6 for approval. (AP Photo/Robert F. Bukaty, File)

Navy shipbuilder Bath Iron Works and production workers reached a tentative agreement to end a strike that has stretched on for more than a month during a global pandemic, officials announced Saturday.

The proposal, which was unanimously endorsed by the union's negotiating team, will be put forth to the 4,300 members of Machinists Local S6 later this month, said Jay Wadleigh, a district union official.

A federal mediator helped to bring the two sides together on subcontracting, seniority and work rules. The tentative agreement, reached late Friday, retains the company’s proposal for annual wage increases of 3% over three years, along with some health care improvements, Wadleigh said.

“It preserves our subcontracting process, protects seniority provisions and calls for a collaborative effort to get back on schedule,” he said.

The tentative agreement positions the shipyard and workers “to partner together to improve schedule performance, restore the yard’s competitiveness and ensure ‘Bath Built’ remains ‘Best Built’ for generations to come,” said Dirk Lesko, the shipyard's president, referencing the shipyard's motto.

Voting on the proposal will take place online and via telephone from Friday, Aug. 21, to Sunday, Aug. 23.

Production workers went on strike June 22 after overwhelmingly rejecting the company’s final offer. The strike dragged on for more than six weeks against the backdrop of the coronavirus pandemic — during which workers lost their company-paid insurance — and an election year in which some politicians sought to get involved on behalf of workers.

Frustration at the shipyard — a subsidiary of General Dynamics that builds guided-missile destroyers for the U.S. Navy — had been building among workers since the last contract in which the Machinists accepted concessions that were deemed necessary to win a U.S. Coast Guard contract — and save shipbuilding jobs.

Bath Iron Works lost that contract to another shipyard in 2016. It also lost a lucrative competition for Navy frigates in late April. Shipbuilders contended production workers shouldn’t shoulder the cost for problems they blame on mismanagement.

The pandemic exacerbated the tensions at the shipyard on the Kennebec River. Some workers were angry when the shipyard rebuffed requests to shut down for two weeks. The shipyard was considered essential and continued production even though hundreds of workers stayed home.

The strike threatened to put production further behind schedule at a time of growing competition from China and Russia. Bath Iron Works was already six months behind before the strike, partly because of the pandemic.

The shipyard, a major employer in Maine with 6,800 workers, has been undergoing a transition as aging workers reach retirement. The shipyard hired 1,800 workers last year and expects to hire 1,000 workers this year. Despite all of the new workers, who must be trained, the shipyard said it needs the flexibility of hiring subcontractors.