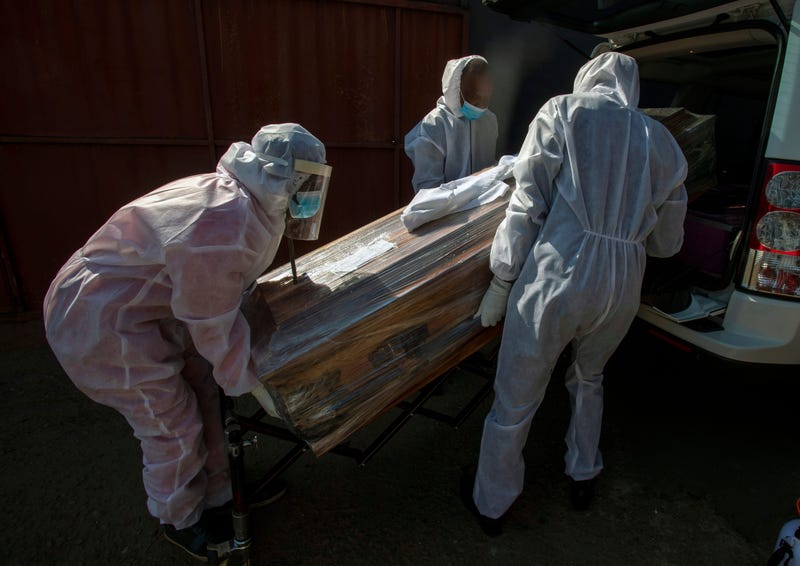 Photo credit Funeral home workers in protective suits carry the coffin of a woman who died from COVID-19 into a hearse in Katlehong, near Johannesburg, South Africa, Tuesday, July 21, 2020. South Africa, last Saturday became one of the top five worst-hit countries in the coronavirus pandemic, as breathtaking new infection numbers around the world were a reminder that a return to normal life is still far from sight. (AP Photo/Themba Hadebe)

JOHANNESBURG (AP) — The South African Medical Research Council is reporting a “huge discrepancy” between the country’s confirmed COVID-19 deaths and the number of excess deaths from natural causes, while Africa’s top health official says the virus is spreading there “like wildfire.”

The new report, which came out late Wednesday, shows more than 17,000 excess deaths in South Africa from May 6 to July 14 as compared to data from the past two years, while confirmed COVID-19 deaths are 5,940.

“In the past weeks, the numbers have shown a relentless increase — by the second week of July, there were 59% more deaths from natural causes than would have been expected based on historical data,” the report says.

The council’s president, Glenda Gray, said in a statement the excess deaths could be attributed to COVID-19 as well as to other widespread diseases such as HIV and tuberculosis as many health resources are redirected toward the pandemic.

Meanwhile, some South Africans are thought to be avoiding health facilities as fears of the new virus spread and public hospitals are overwhelmed.

“In all countries with COVID-19, we are seeing this,” Health Minister Zweli Mkhize said of the report.

South Africa is now one of the world's top five hot spots. It makes up more than half the confirmed cases on the African continent with 394,948, with the toll expected to surpass 400,000 by the end of Thursday.

Local transmission of the virus has begun in many countries across the continent, and once it is seeded in vulnerable communities such as slums it “spreads like wildfire, which is what we’re seeing in South Africa now,” Nkengasong said.

The true number of cases in Africa is unknown, as shown by the new report in South Africa, the continent’s most developed country.

Testing remains limited by shortages of supplies, with just 7.2 million tests conducted on a continent of 1.3 billion people. Data collection is incomplete as some people are dying at home or before being tested. Few African countries were equipped to widely track deaths even before the pandemic.

“Community deaths, we just don’t know how countries are capturing that,” Nkengasong said.

Africa’s case fatality rate in this pandemic remains relatively low at just over 2%, but that measure is weakened if authorities don’t know the real number of deaths.

As cases climb, the Africa CDC director said a “universal masking of the continent is very important at this critical stage” as some officials in South Africa and elsewhere warn against pandemic fatigue.

Many countries across Africa locked down quickly as the pandemic raced across Europe and the United States, delaying its spread at home. But economic pressures have forced most governments to loosen restrictions, though South Africa this month returned to a ban on alcohol sales to help free up precious hospital beds.

“The continent still, as a while, has a chance to fight back in a successful manner,” Nkengasong said, pointing out that 37 countries still have reported less than 5,000 cases.