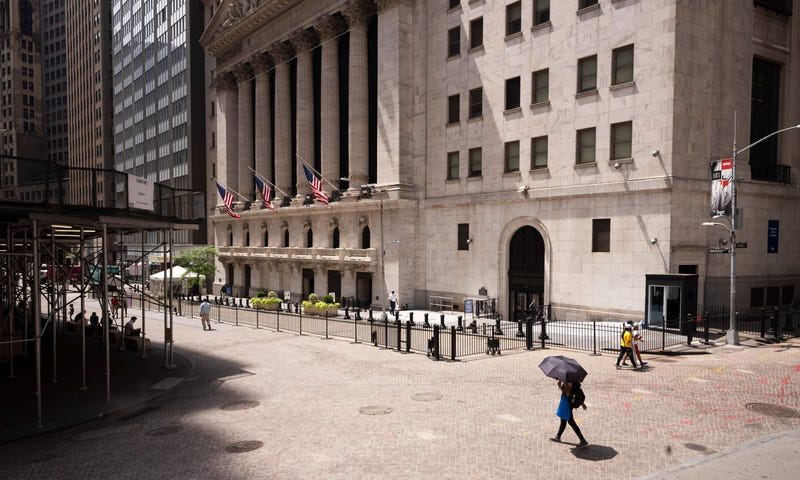 Photo credit FILE - People pass the New York Stock Exchange, Thursday, July 30, 2020. Wall Street is stalling on Friday, Aug. 7 as a whirlwind of worries about rising U.S-China tensions and whether Congress can deliver more aid for the economy threaten to halt its big run.(AP Photo/Mark Lennihan)

NEW YORK (AP) — Wall Street’s big rally let off the accelerator on Friday, despite a better-than-expected report on the U.S. job market, amid worries about worsening U.S.-China tensions and whether Washington can deliver more aid for the economy.

Technology stocks fell, though, on worries that China could retaliate for President Donald Trump’s latest escalation against Chinese tech companies. The Nasdaq composite dropped 97.09, or 0.9%, to 11,010.98 after setting a record Thursday. It’s a rare stumble for big tech stocks, which have soared on expectations they can keep raking in profits regardless of the pandemic.

“The Chinese aren’t going to take this lightly,” said Quincy Krosby, chief market strategist at Prudential Financial. “They’ve already suggested they might take it to court. The point is the market is projecting we’re going to see a ratcheting up of tensions between the U.S. and China, and it could focus on technology.”

The day’s headline economic report was an encouraging one for investors: Employers added nearly 1.8 million jobs last month, about 185,000 more than economists had forecast. Analysts said they found some encouraging trends throughout the report, such as a stronger-than-expected rise in average hourly earnings.

“Yes, future employment data will likely slow due to more COVID-19 restrictions, but for now you have to be quite impressed with how far we’ve come the last few months,” Ryan Detrick, chief investment strategist for LPL Financial, said in a statement.

Several areas of the market that tend to rise when investor upgrade their expectations for the economy rallied.

Stocks of smaller companies climbed more than their bigger rivals, and the Russell 2000 index of small-cap stocks jumped 24.56, or 1.6%, to 1,569.18. Treasury yields also rose. Financial stocks, which have swung sharply with prospects for the economy and interest rates, had the biggest gain of the 11 sectors that make up the S&P 500. Seven out of 10 stocks within the index rose for the day.

Still, the jobs report also showed that hiring slowed in July after two months of acceleration, and the job market remains far below where it was before the pandemic.

Analysts said the better-than-expected jobs report may also have removed some of the urgency from talks on Capitol Hill, where Congress and White House officials have been negotiating on a hoped-for deal on more aid for the economy. They had set an informal Friday deadline to reach the outlines of an agreement, including benefits for unemployed workers, and Treasury Secretary Steven Mnuchin came out of talks Friday saying no progress was made.

Mnuchin said Trump is considering executive orders to address some of the issues without Congress, but critics question how much impact they would have.

Investors say Washington needs to act quickly because $600 in weekly unemployment benefits from the federal government just expired. The economy has shown signs of improvement since the spring but is still hobbling, and concerns are rising that it could backtrack amid a resurgence in coronavirus counts.

“The market clearly believes that a package is necessary to cushion the downside of the pandemic-induced slowdown in the economy,” Prudential Financial’s Krosby said. And even though last month's jobs gains were bigger than expected, “it still suggests there’s a long way to go to heal the labor market.”

The market also focused on Trump's order for a sweeping but vague ban on dealings with the Chinese owners of popular social media apps TikTok and WeChat on security grounds.

Tensions between the world’s two largest economies have been escalating for years, highlighted by the U.S.-China trade war that seemed to have reached at least a temporary truce early this year. But tough talk has continued to flow, with Trump keying in on TikTok in particular recently.

The escalating U.S.-China tensions helped send tech stocks in the S&P 500 down 1.6% Friday, more than quintuple the loss of any of the other 10 sectors that make up the index.

Even Apple, whose stock has been nearly unstoppable through the pandemic, slumped. It fell 2.3% for its first drop in eight days.

Gold slipped, a rare step back following its record-setting run as investors seek safety amid a weak global economy, trade tensions and low interest rates. An ounce of gold to be delivered in December lost $41.40 to settle at $2,028.00.