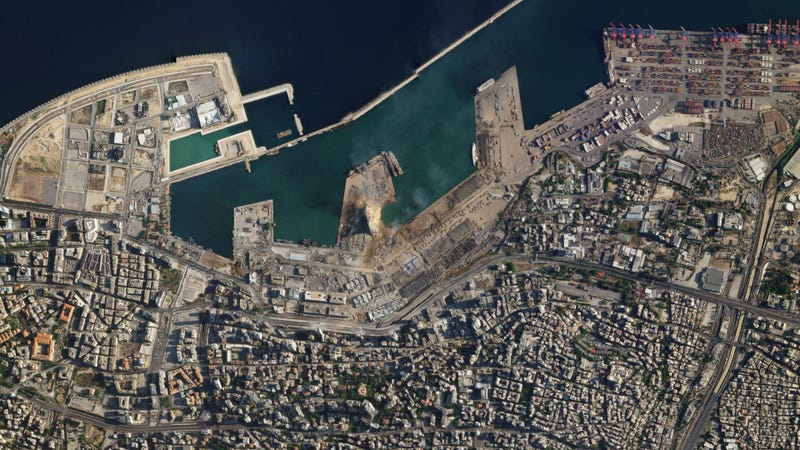 Photo credit This satellite image taken on Wednesday Aug. 5, 2020 shows the port of Beirut and the surrounding area in Lebanon following a massive explosion on Tuesday. Residents of Beirut confronted a scene of utter devastation a day after a massive explosion at the port rippled across the Lebanese capital, killing at least 100 people, wounding thousands and leaving entire city blocks blanketed with glass and rubble. (Planet Labs Inc. via AP)
By The Associated Press

The Australian government has pledged an initial 2 million Australian dollars ($1.4 million) to the relief effort in Lebanon following the deadly blast that ripped across the capital Beirut.

Prime Minister Scott Morrison told reporters Thursday that the aid will be provided to the World Food Program and to the Red Cross for food, medical care and essential items.

He says his country is considering another round of support.

Morrison says some Australian Embassy personnel were injured but “they are safe and accounted for and we wish them a speedy recovery.”

He also thanked the U.S. Embassy officials in Beirut for their support.

Tuesday's blast killed 135 people and injured about 5,000 others. Investigators focused on possible negligence in the storage of tons of a highly explosive fertilizer in a waterfront warehouse, while the government ordered the house arrest of several port officials.

Germany has dispatched dozens of search and rescue specialists to Lebanon to help in the race to find survivors trapped beneath rubble following Tuesday’s explosion in Beirut.

About 50 staff of Germany’s THW civil protection organization flew out of Frankfurt late Wednesday with search dogs and 15 tons of equipment to locate people below collapsed buildings.

Timo Eilhardt, THW’s chief of operations, said there is normally a good chance of finding survivors more than 72 hours after a disaster, “which means we can expect to find people for another two to three days.”

Russia’s Ministry for Emergencies says that its first plane carrying relief teams, doctors and medical equipment has landed in Beirut.

The ministry said Wednesday the aircraft has delivered a mobile hospital along with 50 emergency workers and medical personnel. Another three Russian flights are scheduled to arrive with