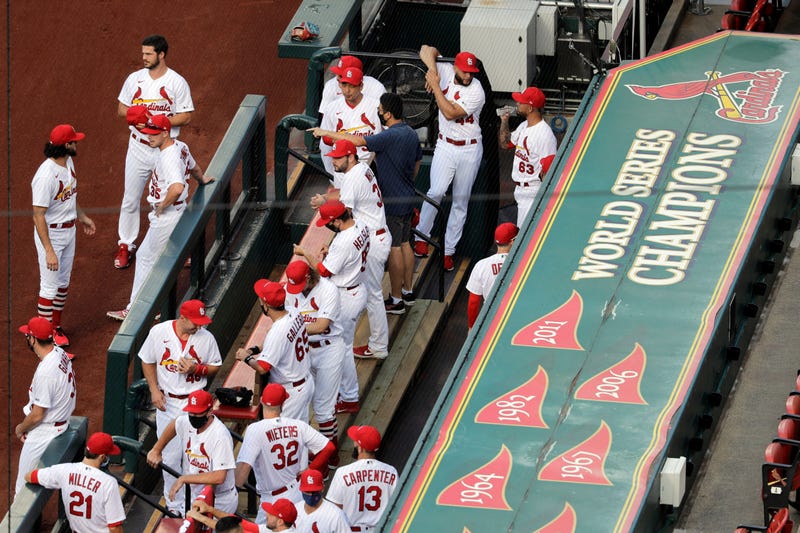 Photo credit FILE - In this July 24, 2020, file photo, members of the St. Louis Cardinals wait to be introduced before the start of a baseball game against the Pittsburgh Pirates in St. Louis. The Cardinals 4-game series against the Detroit Tigers was postponed Monday, Aug. 3, 2020, after more Cardinals players and staff staffers test positive for COVD-19. The series was to have been played in Detroit from Tuesday through Thursday. (AP Photo/Jeff Roberson, File)

The series was to have been played at Comerica Park from Tuesday through Thursday.

St. Louis has been in quarantine since Thursday in Milwaukee, where the Cardinals’ series last weekend was postponed, and the team is being tested daily.

St. Louis last played July 29 at Minnesota and is tentatively set to resume its schedule this Friday at home against the Chicago Cubs.

The Cardinals are the second team sidelined by the novel coronavirus since the season started July 23.

The Miami Marlins are set to resume play Tuesday in Baltimore following an outbreak within their traveling party that sidelined half the players. Miami has not played since July 26.

Because the outbreak occurred in the visiting clubhouse at Citizens Bank Park, the Phillies were sidelined for a week while they were tested daily.

The Raiders will play their first season in Las Vegas without any fans at their home games because of the COVID-19 pandemic.

The team sent a letter to season ticket holders on Monday saying that after discussion with health care officials and local leaders, the decision was made not to allow fans.

Both the New York Jets and Giants previously announced they would play without fans this season. Most other teams are hoping to be able to have at least limited crowds.

The Raiders relocated from Oakland, California, after last season.

The National Hockey League says there have been zero positive coronavirus test results since 24 teams entered quarantined bubbles in Toronto and Edmonton, Alberta.

The league announced it had administered more than 7,000 tests to players, coaches, staff and officials over the past week. Teams with 52-member traveling parties entered the bubbles July 26.

There were also zero positives the previous week when teams were still in their home cities for training camp.

Results of COVID-19 testing conducted Sunday show there were no new positive results for the Philadelphia Phillies.

The team was traveling to New York to resume its schedule against the Yankees in a night game.

Danish organizers say the Tour de France start due to take place in Copenhagen next year has been moved to 2022 to avoid being held in the same month as the rescheduled Tokyo Olympics and the European Championship soccer tournament.

Copenhagen Mayor Frank Jensen says the move means the three-stage Tour start in his city will now be planned for July 1-3, 2022, adding that he hopes the coronavirus pandemic will have passed by then.

The Tour’s French organizers have yet to announce a replacement city for Copenhagen, although there have been reports that the three-week event could start from the French region of Brittany in 2021.

This year’s Tour, which was supposed to start in June, will now be held Aug. 29-Sept. 20 — starting in Nice.