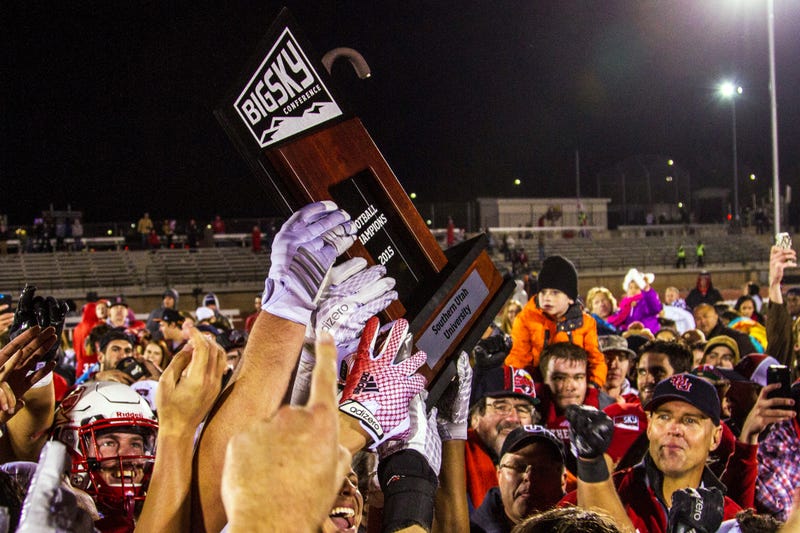 Photo credit FILE - In this Nov. 21, 2015, file photo, Southern Utah celebrates with the trophy after defeating Northern Arizona in an NCAA college football game for the Big Sky Conference title Cedar City, Utah. The Big Sky Conference postponed its football season on Friday, Aug. 7, 2020, to the spring because of the coronavirus pandemic and called for the FCS playoffs to be moved to the second semester as well.(Jordan Allred/The Spectrum via AP)

Darlington Raceway has gotten state approval to have fans in the stands when it runs NASCAR’s Southern 500 next month.

The state Commerce Department gave the track “Too Tough To Tame” an exemption to have up to 8,000 fans in the stands, according to an agency spokesman.

South Carolina Gov. Henry McMaster last week said he was limiting venues to 250 people or 50% of capacity, whichever was less, due to the continuing coronavirus pandemic. Venues such as Darlington that get exemptions must require wearing masks or face coverings as a condition of entry.

Darlington was the first track to host NASCAR racing last May with two races in a three-day period after missing more than two months due to COVID-19. The Sept. 6 race will be the first of NASCAR’s 10-event playoffs and mark Darlington’s first-ever season with three NASCAR Cup Series races.

The NCAA Division II South Atlantic Conference is postponing its fall sports schedule until the spring of 2021 due to the ongoing coronavirus pandemic.

The conference’s President’s Council announced the decision Friday. The group had previously chosen to delay fall competition until Sept. 26, but said that due to the continuing threat of the virus, it was imperative for the health of athletes, coaches, fans and campus communities to delay things even further.

The league is made up of 13 schools in North Carolina, South Carolina, Tennessee and Virginia.

Northwestern returned to the football field for the first time since a false positive for COVID-19 led to 37 players being quarantined and workouts being paused.

Coach Pat Fitzgerald said after the start of camp the Wildcats still are “batting a thousand” after a player who tested for the virus last week did not have it after all.

“I think it showed us that our plan and our execution of our plan has been flawless,” he said.

Fitzgerald was at dinner July 31 when he learned about the positive result and that contact tracing protocols were being enacted. The decision to put workouts on hold was made after team physician Jeff Mjaanes consulted with Northwestern University Health Services doctors.

Fitzgerald said they learned Wednesday afternoon after more tests that no one had the virus. He also said workouts this week would have been lighter anyway. They could have resumed Thursday, but Fitzgerald opted to wait until the start of camp.

“Really proud of our guys with the choices they’re making,” he said. “It’s not a four-hour problem that they’re in the building; it’s the other 20 hours that I think’s a challenge for every college football player and every college student.”

North Carolina defensive backs D.J. Ford, Javon Terry and Bryce Watts have opted out of playing this season due to concerns about the coronavirus pandemic.

Team spokesman Jeremy Sharpe announced in a video call with reporters after Friday’s practice. Ford is a redshirt senior who started seven games last year, while Terry appeared in all 13 games as a redshirt freshman. Watts is a junior who sat out last year after transferring from Virginia Tech.

The team had previously announced that offensive lineman Triston Miller would not play due to “family reasons,” though it did not elaborate further.

The Big Sky Conference postponed its football season to the spring because of the coronavirus pandemic and called for the FCS playoffs to be moved to the second semester as well.

The Big Sky’s decision all but officially ends any chance of the FCS playoffs, which are an NCAA-sponsored event unlike the College Football Playoff which crowns a champion at the highest level of Division I, being held in the fall. Earlier in the week, the NCAA announced each of its three divisions would determine whether national championship events should be held in fall sports. The NCAA said if more than 50% of schools that compete in a sport did not compete in a regular season, the championship would be canceled.

With the Big Sky’s postponement and the Pioneer Football League’s decision to not have a conference season earlier in the day, more than 70 of the 127 FCS schools have said they will not play in the fall.

The Big Sky, traditionally one of the strongest FCS conferences with Montana, Eastern Washington and Montana State, said it will attempt to play an eight-game conference schedule in the spring.

Maryland senior quarterback Josh Jackson has opted out of the upcoming football season, leaving the Terrapins with very little depth and experience at the pivotal position.

Jackson is the most prominent of six Maryland players who have decided not to play in 2020 for reasons related to the COVID-19 pandemic, coach Michael Locksley said during a teleconference Friday.

Jackson played in 10 games last year for Maryland after transferring from Virginia Tech. He went 98 for 207 for 1,274 yards and 12 touchdowns with six interceptions.

His backup was Tyrrell Pigrome, who transferred to Western Kentucky during the offseason.

The fifth-ranked Svitolina, a semifinalist at Flushing Meadows a year ago, said on social media she doesn’t feel comfortable traveling.

No. 7 Bertens wrote on Instagram that one of her concerns is the need to be quarantined upon returning to Europe after the U.S. Open, which runs from Aug. 31 to Sept. 13.

Duke coach David Cutcliffe says long snapper Ben Wyatt and offensive tackle Jacob Rimmer have opted out of playing this season because of concerns about the coronavirus.

Cutcliffe spoke after Friday’s first preseason practice, saying Wyatt and Rimmer “just weren’t comfortable with playing.” He said both would remain on scholarship as they work toward earning their degrees this spring.

Wyatt is a fifth-year senior who appeared in all 38 games over the past three seasons for the Blue Devils. Rimmer is a redshirt junior who saw action in three career games. Senior John Taylor is set to replace Wyatt.

Last week the school announced that 25 athletes had tested positive over the previous three weeks as they began returning to campus for voluntary workouts, with nine in mandatory isolation. The school said all cases involved no or mild symptoms. No teams had to pause workouts due to testing results.

The LPGA Tour will have another major without spectators.

The ANA Inspiration announced that it will not have fans Sept. 10-13 at Mission Hills in Rancho Mirage, California. The major is typically the first of the year in early spring, but was postponed by the COVID-19 pandemic.

The LPGA’s first major is in two weeks: The Women’s British Open at Royal Troon will not have spectators.

The decision was not a surprise. In men’s golf, the PGA Championship this week in San Francisco and the U.S. Open next month in New York will be without spectator. The question now is which tournament will be the first with fans.

The Milwaukee Brewers have canceled their 2021 Brewers On Deck event, an annual January showcase that allows thousands of fans to meet current and former players and coaches in a convention hall.

The Brewers said that the decision was made with “the health and safety of the community in mind.”

“It’s impossible to know at this time what restrictions may be in place that would require a different footprint or format for Brewers On Deck in January,” Brewers president of business operations Rick Schlesinger said in a statement. “It takes many months of lead time for our staff to plan and execute the event, and with so many uncertainties we unfortunately have to make this decision now.”

The Pioneer League will not play a fall football schedule, a decision that likely means there will be no FCS playoffs this season.

The 11-team Pioneer League spans from the Midwest to the West Coast. The conference said in a statement the challenges related to team travel, meeting state, local and institutional health requirements and COVID-19 mitigation strategies led to the decision. The Pioneer League said it would consider playing a football season at another point in the school year if feasible.

The NCAA this week announced it would not conduct championship events in sports where at least 50% percent of the participating schools do not play a fall regular season. Unless Pioneer League schools pursue a football season as independents, the number of FCS schools that have canceled fall football is 68 out of 127.

The Big Sky was also expected to announce soon whether it will play in the fall.

The Southeastern Conference will require football players and others in direct contact with the program to be tested at least twice weekly during the season.

The league on Friday released its initial COVID-19 requirements for fall sports, including football. In football, the testing will typically come six days and three days before competition.

Coaches, staff and other personnel will be required to wear face coverings on the sidelines at sporting events this fall.

The initial guidelines include testing requirements, procedures for infections and contact tracing and protocols for quarantine and isolation.

The rules, which also apply to volleyball and soccer, were recommended by the SEC’s Return to Activity and Medical Guidance Task Force.

The league expects the task force to release another report by Aug. 31.

The Detroit Lions are preparing to host fans at all eight regular-season home games, although it’s uncertain how many will be allowed to attend.

The NFL club said Friday season-ticket holders can opt out of purchasing tickets for the 2020 season if they want. The team also is offering various incentives for fans who defer payments to the 2021 season instead of asking for refunds.

Fans and employees at Ford Field would be required to wear face coverings. Designated gates and entry times would be assigned to fans.

The team says the ability to host fans at a reduced capacity depends on local and state approval.

What did cricket fans do when there was no live games to watch during lockdown in the coronavirus pandemic?

The International Cricket Council released figures Friday showing it had 1.65 billion video views on its Facebook channel in the first half of 2020, saying it “topped the rankings in terms of video consumption among leading sports bodies” on the social media platform.

Cricket was shuttered globally from late March until last month, when host England beat West Indies 2-1 in a three-test series that was played inside bio-secure venues in Southampton and Manchester.

The ICC, citing statistics from the CrowdTangle analytics tool, said daily video consumption on its Facebook page increased from 3 million minutes viewed to 15 million minutes per day during the lockdown.

“At a time when COVID-19 has severely impacted live sports, the ICC’s channels have gone from strength to strength,” the ICC said in a statement.

Cricket hit some highs in terms of viewership over the 12 months to June, including the 1.1 billion views for the Women’s Twenty20 World Cup in Australia in February and March.

Online traffic from India helped. The final between Australia and India, which attracted a crowd of more than 86,000 at the Melbourne Cricket Ground, set a single-day record for women’s tournament with 64.9 million views on the ICC Facebook page.