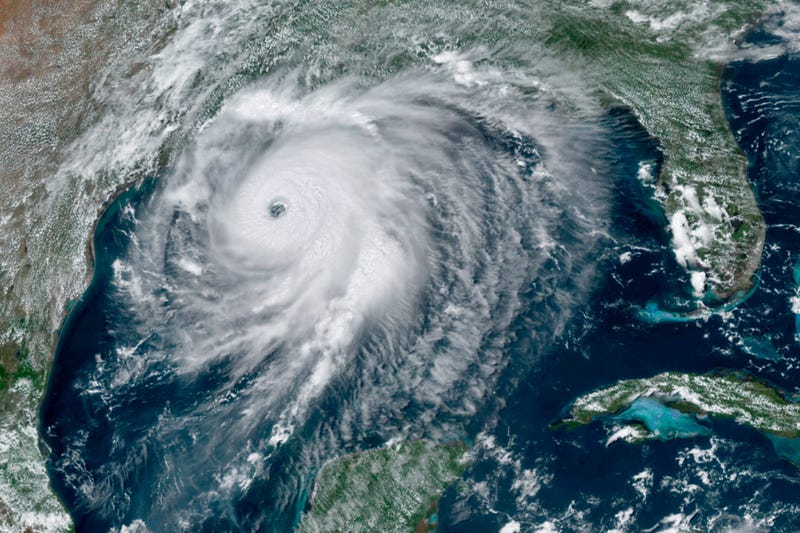 The Latest on Hurricane Laura (all times local):

BATON ROUGE, La. — Louisiana Gov. John Bel Edwards said the state is closing Interstate 10 from around the Atchafalaya Bridge outside of Lafayette all the way into part of Texas, because several stretches within that area are expected to flood.

In a radio interview Wednesday night, Edwards talked of the “apocalyptic” language that meteorologists have used for the storm. “The language I’ve heard from the National Weather Service I’ve never heard before ... They’re sending the strongest possible message about how serious this storm is," he said.

He talked specifically about concerns in Cameron Parish, which could receive wind gusts up to 180 mph (290 kph) and storm surge up to 20 feet (6 meters.)

“When people built back after Rita, they routinely built back to 15 feet,” Edwards said. He noted those structures would be overwhelmed.

Edwards said search and rescue efforts will begin Thursday as soon as it’s safe enough for officials to go out into floodwaters.

Officers went door-to-door in Cameron Parish urging the roughly 7,000 residents to get out before Laura struck, and they all used social media and phone calls to warn people of the danger.

But Ashley Buller, assistant director of the parish Office of Emergency Preparedness, said officials knew of about 150 people who decided to stay put in structures ranging from seemingly safe elevated homes to recreational vehicles, which could easily be swept away by rushing storm surge.

“It’s a very sad situation,” Buller said in a telephone interview from Lake Charles, where parish officials relocated from an office closer to the coast in Cameron. “We did everything we could to encourage them to leave.”

Forecasters said Gulf waters could rise 20 feet along the coast of the low-lying parish without adding the height of waves, meaning the entire parish could be inundated.

“There’s been a lot of question about whether this storm would make it to Category 5 strength before landfall -- I think that is becoming increasingly likely,” said meteorologist Donald Jones, of the National Weather Service’s regional office that covers parts of the Louisiana and Texas coastlines that are in the bullseye of Laura’s path.

“I think all evidence right now indicates that we’re probably going to be looking at a Category 5 storm," he said.

Jones noted that there’s also debate within the weather service about whether Laura would maintain Category 5 status all the way to landfall, even it reaches that strength in the next few hours.

He made the comments during a Wednesday night briefing at the weather service’s New Orleans office, where he evacuated to from the Lake Charles office because of the storm.

LITTLE ROCK, Ark. — Arkansas Gov. Asa Hutchinson has declared an emergency ahead of Hurricane Laura and set aside $250,000 to prepare for the storm’s impact.

Hutchinson said Wednesday that the state will have search and rescue teams on standby.

Arkansas is hundreds of miles inland, but even as Laura moves away from the Gulf of Mexico, it is expected to hit the southwest part of the state with tropical storm-force winds. The storm could also drop up to 8 inches (20 centimeters) of rain near Arkansas’ borders with Louisiana, Texas and Oklahoma.

Forecasters also said heavy rainfall could arrive by Friday in parts of Missouri, Tennessee and Kentucky.

Laura is so powerful that it’s expected to become a tropical storm again once it reaches the Atlantic Ocean, potentially threatening the Northeast.

MEXICO CITY — Off Mexico’s western Pacific coast, two tropical storms formed Wednesday in what appears likely to be a busy season in the Pacific as well.

Tropical Storms Hernan and Iselle formed within hours of each other. Both are expected to curve toward the southern tip of Baja California, but neither is expected to hit land. Both will likely decline to tropical depressions by late in the week.

Hernan may swing near the coast around the resort of Puerto Vallarta.

The National Hurricane Center said Hernan had winds of about 40 miles per hour (65 kph) and was located about 185 miles (300 kms) south of Cabo Corrientes, Mexico. It was moving northeast at 6 mph (9 kph).

WASHINGTON — White House officials are nervously tracking the path of the storm, which they fear will make a devastating landfall.

Federal Emergency Management Agency officials have been dispatched to the region and are blanketing the airwaves with messages to follow authorities’ instructions, though there was concern that the evacuations started late.

There were no plans to reschedule portions of the Republican National Convention. Officials expected that Trump would travel to inspect the storm damage either this weekend or early next week.

Louisiana and Texas refineries and liquefied natural gas terminals shut down ahead of Hurricane Laura’s arrival.

Phillips 66 has shut down all of its Lake Charles-area operations, including a refinery, lubricant plant and terminals and pipelines, as well as a terminal in Beaumont, Texas, according to a notice on its website.

A few more refineries are in northwest Louisiana, where Laura was expected to arrive Thursday, possibly with winds of 74 to 110 miles per hour (119 to 177 kph), putting it in Category 1 or 2.

HOUSTON — More than 60% of flights Wednesday to and from Houston’s largest airport were canceled as Hurricane Laura approached.

About one-third of Thursday’s flights were scrubbed at Bush Intercontinental Airport and the city’s smaller Hobby Airport.

Oil analyst Andrew Lipow said Wednesday that refineries nationwide were running at only about 80% because the pandemic has reduced demand for fuel. That means other refineries can pick up slack from shutdowns in Beaumont and Port Arthur, Texas, and Lake Charles, Louisiana, he said.

Lipow said a major remaining concern is that pumping stations for the Colonial Pipeline could be damaged by flooding, which could stop gasoline produced in Houston-area refineries from reaching the East Coast, although the pipeline could still send fuel from refineries in New Orleans, Mississippi and Alabama.

The National Guard has staged more than 200 high-water vehicles and 65 boats in south Louisiana ahead of the approaching storm.

BATON ROUGE, La. — Hundreds of residents of 11 nursing homes in southwest Louisiana have been evacuated in advance of Hurricane Laura, according to the state health department.

Most of the facilities were in Calcasieu Parish, which is expected to get a direct strike from the hurricane.

Health department spokeswoman Aly Neel says a mix of buses and ambulances moved the residents to other facilities mainly in Louisiana, but also in Texas.

Traffic slowed to a crawl at times amid intermittent periods of wind-driven rain on an elevated section of a highway between Lafayette and Baton Rouge.

Hotels in Baton Rouge were filling up fast, said Meredith Conger of tourism agency Visit Baton Rouge. Some were first responders and others were individual evacuees possibly seeking the privacy of a hotel room rather than a shelter or relatives’ house, she said.

Conger acknowledged that the business brought in by evacuees was a lifeline for Baton Rouge hotels after the pandemic shut down tourism and business travel.

He said Laura has been following a path similar to Hurricane Rita, which struck in 2005 and caused several tornadoes in Mississippi, including in the Jackson area.

Michel said Mississippi’s coastal Hancock County, which touches Louisiana, could get storm surge of 2 to 6 feet (0.6 to 1.8 meters), and flash flooding is possible in three other counties in southwestern Mississippi.

Port Arthur had ended evacuating residents by bus at noon on Wednesday.

“If you decide to stay, you are on your own,” said Port Arthur Mayor Thurman Bartie. “I will not put my people in harm’s way. If you stay, it is you and God.”

Each plane can carry only up to 40 people due to coronavirus distancing guidelines. The planes are not equipped to handle residents with medical needs.

The planes will take evacuees to the Dallas-Fort Worth area and will not make a return trip.

WASHINGTON —More than 500,000 packaged meals and 800,000 liters of water are at two sites in Louisiana for use by storm victims if needed, according to the Federal Emergency Management Agency.

The supplies have been in place at the Roseland Staging Area and Camp Beauregard since before Tropical Storm Marco, FEMA said Wednesday. Additional supplies are on standby in Texas.

The federal agency, which works with local authorities to coordinate disaster response and relief efforts, has also brought in federal response teams and four urban search and rescue teams to provide additional assistance.

The agency said in a blog post that it has spent the past several months preparing to confront natural disasters amid the coronavirus pandemic.

Laura is predicted to reach at least 145 mph (233 kph) winds, but may weaken ever so slightly before landfall. The National Weather Service says rainfall can reach 15 inches (38 centimeters) in parts of Louisiana and Texas.

GALVESTON, Texas — Texas Gov. Greg Abbott implored residents who hadn’t evacuated ahead of the storm on Wednesday to do so.

Abbott said storm surge was going to be a big problem and was expected to rise 10 to 15 feet (3 to 4.5 meters) in the Jefferson County area.

Resources that have so far been deployed in the state ahead of the storm included: 400 buses, 38 aircraft, 82 boats, 202 high profile vehicles and 60 ambulances, the governor said.

More than 5,000 people who have evacuated have already been sheltered, many of them in hotels.

Earlier Wednesday, officials in Austin said the city had run out of free hotel rooms for evacuees and had started to send families fleeing the storm to a shelter nearly 200 miles (322 kilometers) farther north.

The team includes personnel from several fire and police stations across northeast Oklahoma, as well as vehicles, boats and other emergency equipment.

Earlier this week, a five-person support team deployed from Oklahoma to Louisiana to help with forward operations, including response coordination, evacuation and shelter planning, and search-and-rescue coordination, Stitt said.