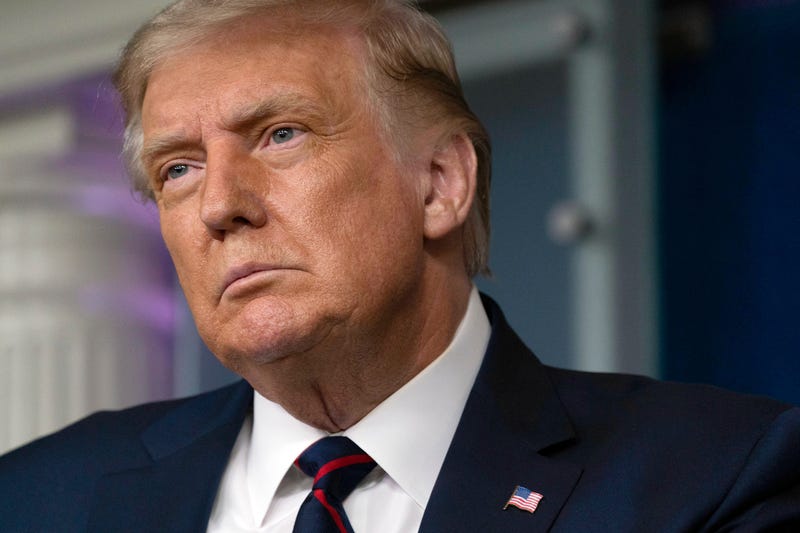 Photo credit President Donald Trump pauses while speaking during a media briefing in the James Brady Briefing Room of the White House, Sunday, Aug. 23, 2020, in Washington.(AP Photo/Alex Brandon)
By The Associated Press

CONCORD, N.H. — The New Hampshire state health commissioner said Thursday that there have been no cases of the coronavirus linked to President Donald Trump’s rally two weeks ago, and only one person who attended another large event - Motorcycle Week in Laconia - has since tested positive.

About 1,400 people attended the president’s rally in an airport hangar in Londonderry Aug. 28. Many were not wearing masks, despite Gov. Chris Sununu’s order making them mandatory for gatherings of more than 100 people.

Sununu was asked a few days later “what did it make you feel” to see people ignoring the mandate, and said he felt frustrated, just as he does when he sees someone grocery shopping without a mask.

On Thursday, Department of Health and Human Services Commissioner Lori Shibinette said officials aren’t aware of any attendees testing positive after the rally. Asked if passing someone in a grocery store was equivalent to sitting shoulder-to-shoulder with others for several hours, she said, “Any time you’re within six feet people of someone and not wearing a mask, you increase your risk of exposure to COVID-19.”

The annual Motorcycle Week was held Aug. 22 to 30, and Shibinette said she knows of one attendee who has tested positive. In contrast, health officials across 12 states have found more than 300 people with infections who attended the Sturgis Motorcycle Rally in South Dakota in August.

— The coronavirus pandemic is reshaping how the U.S. is observing the anniversary of 9/11. The terror attacks’ 19th anniversary will be marked Friday by dueling ceremonies at the Sept. 11 memorial plaza and a corner nearby in New York.

— Football returns with the start of the NFL season, but many worry that attending games or get-togethers will lead to a new surge in coronavirus infections.

SIOUX FALLS, S.D. — Federal regulators said Thursday they have cited Smithfield Foods for failing to protect employees from exposure to the coronavirus at the company’s Sioux Falls plant, an early hotspot for virus infections that hobbled American meatpacking plants.

The nature and timing of the violation wasn’t immediately clear from the Occupational Safety and Health Administration, but the announcement included the latest assessment of the virus’ impact in Sioux Falls.

Four plant workers were killed by the virus during the spring and at least 1,294 workers were sickened. Only two deaths among employees had been previously known.

Smithfield Foods, which is based in Virginia, said it plans to contest the citation and $13,494 fine.

DeSantis told a meeting of restaurant industry executives in Fort Myers that the current limitation of 50% capacity for indoor dining and requiring that tables be kept 6-feet (2-meters) apart seems arbitrary.

DeSantis suggested eateries will know best how to govern their behavior as they don’t want to scare off customers by becoming coronavirus hot spots.

DeSantis gave no specifics on when the restrictions would be eased, but said it will be soon.

DeSantis also said he supported the European and Brazilian travel restrictions, but they “have served their purpose.”

“I have told the president we would like to see those lifted,” said DeSantis, who is a strong Trump ally. He said he sees no difference if someone travels across the border from Georgia to visit Florida than if they arrive by plane from a foreign country. “I am comfortable with it.”

Doctors increasingly are finding blood clots throughout the bodies of many people who died from COVID-19 along with signs of damage they do to kidneys, lungs, blood vessels, the heart and other organs.

National Heart, Lung and Blood Institute Director Dr. Gary Gibbons says that hospitals have been giving seriously ill patients anti-clotting drugs to try to prevent this, but “quite frankly, we didn’t know how best to treat it” in terms of which drugs or doses to use and at what stage of illness.

The National Institutes of Health will coordinate a study in hospitalized patients comparing low and regular doses of the blood thinner heparin. The study will involve more than 100 sites around the world participating in a research effort with various governments, drug companies, universities and others to speed coronavirus therapies.

A second study in COVID-19 patients not sick enough to need hospitalization will test various strategies against placebo pills: baby aspirin or low or regular doses of the anti-clotting drug apixaban, sold as Eliquis in the United States. The goal there is preventing blood clots or hospitalization.

A third study starting later will test blood thinners for people who have recovered and no longer test positive for the coronavirus. Evidence is building that they may remain at higher risk for blood clots.

UNITED NATIONS — The U.N. envoy for children in conflict says attacking schools and teachers seems to be an emerging tactic of war, particularly in Africa’s Sahel region, and the COVID-19 pandemic “has made things worse.”

Virginia Gamba told the U.N. Security Council on Thursday that in the Sahel, “schools are targeted precisely because they are schools, and even more if they cater to girls.”

In Mali, for example, she said that in the last two years teachers were threatened and killed, education facilities demolished, and learning materials burned, leading to the closure of over 1,260 schools, “even before COVID-19.”

Similarly, the last 12 months in Burkina Faso have seen increasing attacks including the burning of schools and kidnapping of teachers “forcing 2,500 schools to shut down, depriving hundreds of thousands of children from education,” Gamba said.

Elsewhere in the world, especially in Asia and Latin America, she said, “we are also seeing an increase in attacks to education in indigenous communities.”

The Health Ministry on Thursday reported at least 4,013 new cases. The number of patients in serious condition has risen to 488.

Israeli Prime Minister Benjamin Netanyahu says the country’s coronavirus czar and hospital directors have “waved a red flag” and warned that the situation could rapidly worsen, overwhelming hospitals and leading to “many severe cases and many deaths.”

But he appeared hesitant to push for another lockdown, saying “we need to take action sagaciously and not recklessly.”

Israel largely contained its initial outbreak after imposing sweeping closures last spring, bringing new daily cases down to double digits. But the number of cases has steadily risen since authorities abruptly reopened the economy in May.

The coalition government formed that month has been paralyzed by internal bickering, and political leaders are hesitant to take any action that could further harm the economy after the earlier lockdown caused a spike in unemployment.

Israel has reported a total of more than 144,000 cases and 1,075 deaths since the start of the pandemic.

The Israeli military has recently stepped in to assist civilian authorities, and said it carried out a record number of tests on Thursday, which could account for some of the rise in cases.

PARIS — French health authorities have reported on Thursday 9,843 infections from the coronavirus in 24 hours, the highest daily tally since the end of France’s lockdown in April.

France has seen a sharp uptick in new cases in recent weeks and hospitalizations have started to increase steadily, reaching now over 5,000 including 615 people in ICU.

Increased testing could partially account for higher numbers in recent weeks. But relaxed social distancing measures since summer holidays and a return to work sites by many are also seen as contributors.

Over 30,800 people have died in French hospitals and nursing homes since the start of the pandemic, among the highest rates in Europe.

French President Emmanuel Macron is to hold a defense council focusing on the COVID-19 crisis on Friday that may lead to new measures to fight the spreading of the virus in the country.

Current regulations limit restaurants to 50% capacity for in-person dining, restrict bars to takeout and delivery only and place occupancy limits on gyms, salons and other businesses. Indoor gatherings above 50 people are banned.

Edwards has expressed concerns about another surge in cases following the return of students to school and college campuses and the recent Labor Day holiday weekend.

The percentage of positive tests dropped below 10%, a key threshold used by the state, on Aug. 10. It has declined steadily to just below 7% on Sept. 4, according to the state health department website.

Louisiana’s health department reported 499 new confirmed cases Thursday, bringing the state’s total to 155,419. Hospitalizations dropped to 762, the lowest since late June. The number of deaths rose by 21 to 4,991.

ALBANY, N.Y. — New York City commuters who refuse to wear a mask on subways, trains and buses could be fined $50 starting Monday.

Metropolitan Transportation Authority Chairman Patrick Foye says the agency just needs to file emergency regulations with the secretary of state. Gov. Andrew Cuomo says he hopes the penalty will help encourage New Yorkers to return to public transit by lowering the possibility of getting infected while using transit.

New York City Transit interim President Sarah Feinberg says compliance with New York’s mask requirement is “very high” on public transit at a time when ridership is picking up. But Feinberg says some passengers refuse to wear a mask even when offered one by a transit worker.

Officials say the penalty will be enforced by MTA police, but New York Police Department officers can also enforce it.

MADRID — Spain’s top coronavirus expert sees the rate of infections in the country easing and “possibly” reaching a plateau after weeks of sharp increases brought restrictions across the country.

The transmission, especially in the Spanish capital, was worrying because it took off before the reopening of schools and the return to work after many left big cities for summer holidays.

“In recent days there is a slowdown in this increase, and we are possibly seeing a stabilization,” Dr. Fernando Simón, who heads Spain’s health emergency coordination center.

Spain is preforming more tests than most European countries, Simón says, adding most of those infected have no symptoms

The Health Ministry reported 4,137 new infections in the last 24 hours, bringing the total to more than 550,000, the highest in Europe. The confirmed death toll reached 26,699 on Thursday.

LONDON — The World Health Organization’s chief scientist says the agency isn’t overly worried about the pause in the clinical trials for a coronavirus vaccine developed by Oxford University and AstraZeneca.

Dr. Soumya Swaminathan called the pause in Oxford’s clinical trial “a wake-up call” to the global community to realize “there are ups and downs in research.”

Swaminathan says early data in human vaccine candidates so far has been “quite promising,” showing the shots trigger an immune response. But she says trials must be conducted in tens of thousands of people to determine whether a vaccine can safely protect people from infection.

“It could be that we see some results end of the year, it could be next year,” she said. “We have to be a little bit patient and wait for the results.”