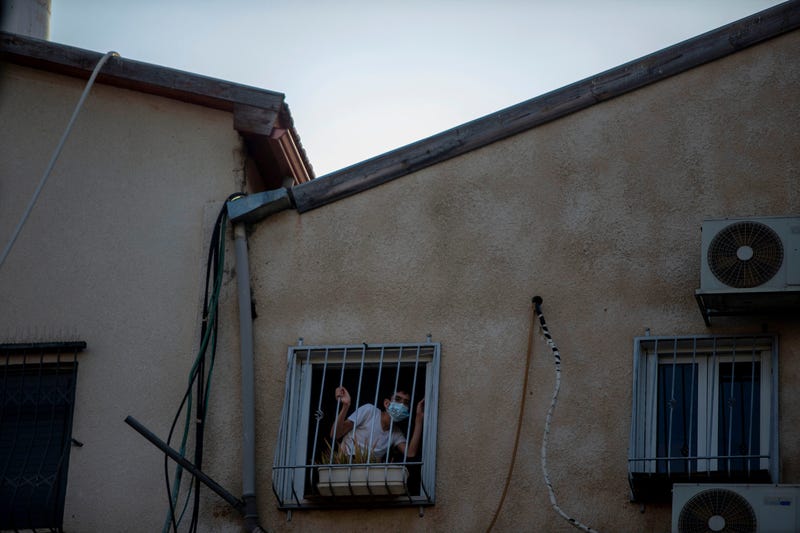 Photo credit An ultra-Orthodox Jewish boy, wearing a face mask amid the coronavirus pandemic, looks out of his window in Bnei Brak, Israel Sunday, Sept. 6, 2020. The death toll from the coronavirus in Israel has surpassed 1,000, as the government on Sunday mulled steps for imposing new restrictions to quell a resurgence in infections. (AP Photo/Ariel Schalit)
By The Associated Press

MORGANTOWN, W.Va. — West Virginia University has suspended 29 members of a fraternity house for not following health and safety orders related to the coronavirus pandemic.

The university said the 29 students received notifications letters of the interim suspensions Sunday stating they have been banned from campus and cannot take classes, including those offered online.

“Their flagrant disregard for the health and safety of their classmates, our campus and the entire Morgantown community will not be tolerated,” Dean of Students Corey Farris said.

— States are planning for cuts as Congress deadlocks on virus aid

— As coronavirus cases fall in the U.S., governors in hard-hit states are rethinking lockdown orders on bars.

— Cutbacks in credit insurance are creating a dilemma for suppliers, caught between potentially going unpaid and losing customers. That could affect retailers as they approach the critical holiday season._

— Some colleges are turning campus sewage into a public health tool. At least two schools in Utah and Arizona have quarantined students after tests showed the presence of genetic material from the new coronavirus in wastewater.

The state reported 41 news cases and nine deaths in the latest 24-hour period. That was the lowest infection tally since 37 were recorded on June 26 in the early days of the state’s second wave of infections.

The state on Sunday announced a slight easing of restrictions in Melbourne that began in early August, but the country’s second-largest city will remain in lockdown until at least Oct. 26.

The new infections bring the 14-day average in Victoria to 96 a day. Victorian Premier Danial Andrews said the average would have to be brought below 50 before restrictions can be relaxed.

“This is not about eradicating it,” Andrews said. “We will finish up with cases and outbreaks in 2021, but they’ll be of such low numbers that we can probably put the lid on those and not have to put restrictions back on,” Andrews said.

JERUSALEM — Israeli Prime Minister Benjamin Netanyahu has announced overnight curfews on some 40 cities and towns hit hard by the coronavirus.

But he backed away from reported calls for full lockdowns after an uproar by powerful religious politicians.

The measures were announced late Sunday after hours of consultations with decision-makers. The government has been forced to take new action after failing to contain an outbreak that has claimed more than 1,000 lives and remains at record levels of new infections. The curfews will go into effect Monday at 7 p.m. and will be in effect until 5 a.m. It was not known how long they will remain in place.

HAVANA — A small outbreak of COVID-19 cases has prompted authorities to reclose schools in a central Cuban province only a week after they opened.

Ciego de Avila schools director Bárbara Rodríguez said 75 of the province’s 90 schools would return to televised teaching on Monday. Students had returned to classrooms only on Sept.1 after a six-month break.

The largest outbreak has been in the capital, Havana, which remains under a nighttime curfew.

Cuba’s baseball season is scheduled to start on Saturday before stadiums without spectators.

LONDON — Britain has recorded its highest daily number of new coronavirus cases since May, with 2,988 new infections announced on Sunday.

Like other European countries, the U.K. is seeing the number of infections rise as society reopens after lockdown.

Some of the increase can be accounted for by expanded testing, which is identifying people who have mild or no symptoms. The number of hospital admissions and deaths has so far not shown a corresponding rise. Two new deaths were reported Sunday.

The increased number of cases comes as British schoolchildren return to class, a milestone in the resumption of normal life.

YANGON, Myanmar — Myanmar on Sunday reported 166 confirmed new cases of the coronavirus, topping the previous single-day high of 107 reported on Aug 31 and bringing the total number of confirmed cases to 1,419. The total number of dead from the disease has risen to eight after two new deaths were announced over the weekend.

Myanmar had its first confirmed case in late March, but a surge in the western state of Rakhine has roughly doubled the total in the past week alone.

The government has responded by imposing new lockdowns along with other restrictions in Rakhine and in major urban areas in other parts of the country. In Yangon, police have begun strictly enforcing a late-night curfew implemented several months ago, arresting more than 1,000 people since late last week.

Although the latest numbers are well off the recent highs, when the number of new daily cases reached nearly 300, authorities are stepping up controls and fines for people not wearing masks in closed spaces or not keeping social distancing.

TIRANA, Albania - An Albanian restaurant owner has been arrested after repeatedly violating the government ban on wedding gatherings due to the coronavirus pandemic. It’s the first time authorities have made such an arrest.

Police reported on Sunday that the 52-year old was arrested in the port city of Durres, about 35 kilometers (20 miles) west of the capital, Tirana, after organizing a wedding. He had earlier been fined twice for the same offense.

Albanian authorities have banned mass activities such as weddings and funerals to impede spread of the virus.

The country has reported 10,255 confirmed virus cases and 316 deaths as of Sunday.

ROME — Silvio Berlusconi’s doctor says that the hospitalized former Italian premier is responding “optimally” to COVID-19 treatment, but that he belongs to the most vulnerable category of patients and is in “the most delicate phase” of the virus.

Dr. Alberto Zangrillo, who is head of intensive care at the San Raffaele hospital in Milan, repeated Sunday that he nevertheless remained “cautiously optimistic” about Berlusconi’s recovery.

“The patient is responding optimally to treatment,” he said. “This doesn’t mean we can claim victory because, as you know, he belongs to the most fragile category” given his age. He also suggested Berlusconi would not be released anytime soon, recalling that the virus “requires adequate treatment and takes its time.”

The three-time premier turns 84 in a few weeks and has had a history of heart problems that required being fitted with a pacemaker several years ago. He checked into San Raffaele Friday after testing positive for the virus earlier in the week. Zangrillo said at the time that he had the early stages of a lung infection.

Data from Italy’s Superior Institute of Health indicates men aged 80-87 have the highest COVID-19 lethality rate among all cases in Italy, at 47%.

Berlusconi spent some of his summer vacation at his seaside villa on Sardinia’s Emerald Coast. Many of Italy’s recent cases of COVID-19 have been linked to clusters in people who vacationed on Sardinia.

MELBOURNE, Australia — The premier of Australia’s Victoria state announced a slight easing of restrictions in Melbourne but the country’s second-largest city will remain in lockdown until at least Oct. 26.

State police charged a protester with assault after an officer suffered cuts to the head during an anti-lockdown rally in Melbourne on Saturday.

Police said that seven others have been charged with breaching COVID-19 directions after about 200 gathered at the Shrine of Remembrance and Albert Park. Scuffles between protesters and police resulted in more than 160 fines for contravening lockdown measures or not wearing a mask.

“Despite all the warnings, it was disappointing to see individuals turn out to protest in the city, putting the lives of Victorians at risk,” a police statement said.

On Sunday, health officials said Victoria recorded 63 new cases and five more deaths. It takes the state’s total fatalities to 666 and the national death toll to 753.

Victoria Premier Daniel Andrews said that from Sept. 13, the nightly curfew will start an hour later at 9 p.m. and run until 5 a.m. People living alone can nominate a friend or family member who can visit them. Two hours of daily exercise will be allowed, including social interactions such as a picnic at a park or reading a book at the beach.

NEW DELHI — India saw another record surge of 90,632 cases in the past 24 hours, as infections spread to smaller cities and parts of rural India.

According to the Health Ministry, India’s caseload reached 4,113,811, slightly short of Brazil’s confirmed 4,123,000 infections. Brazil is the second worst-hit country after the United States with 6,245,112 cases.

Dr. Randeep Guleria, a government health expert, said India is seeing a resurgence with over 70% of its nearly 1.4 billion people still susceptible to infections. “We could say that we are seeing some sort of a second wave in certain parts of the country.”

With the economy contracting by a record 23.9% in the April-June quarter, leaving millions jobless, the government is continuing to relax restrictions except in high-risk areas. It announced that subway will resume service on Monday after more than five months with restrictions on the number of people on board.

Guleria also noted the country is experiencing a COVID behavior fatigue with many people crowding public places without masks and the streets back to traffic jams.