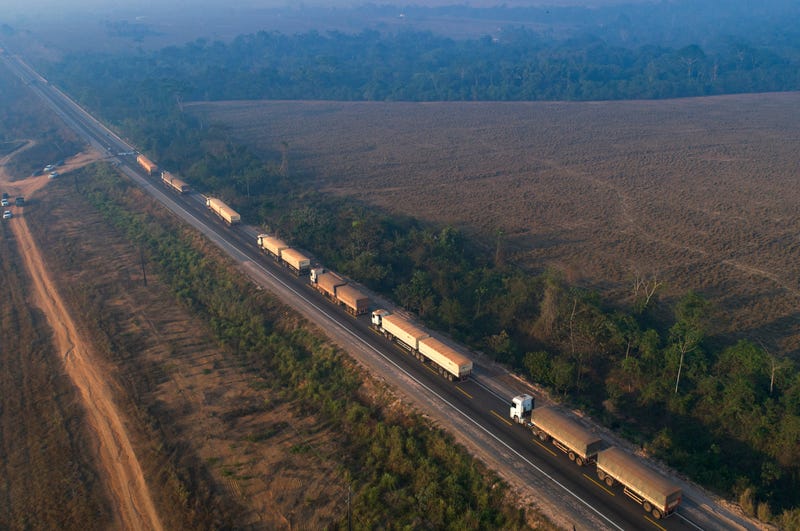 Photo credit Trucks sit idle on highway BR-163 as it is blocked by Kayapo Indigenous near Novo Progresso, Para state, Brazil, Monday, Aug. 17, 2020. Protesters blocked the road to pressure Brazilian President Jair Bolsonaro to better shield them from COVID-19, to extend damages payments for road construction near their land, and to consult them on a proposed cargo railway. (AP Photo/Andre Penner)
By The Associated Press

BRASILIA, Brazil (AP) — Brazil’s environment ministry said it will continue operations to curb deforestation and fires in the Amazon and other regions, reversing an earlier announcement that it would halt such operations starting Monday.

The decision was published on the ministry’s website late Friday after Vice President Hamilton Mourão said Environment Minister Ricardo Salles acted “hastily” when he said the government had run out of money for operations against deforestation.

The environment ministry had previously said the economy ministry had blocked over $11 million for environmental protection, a move that would have demobilized over 1,300 firefighters, hundreds of inspection agents, six helicopters and 10 planes.

President Jair Bolsonaro and Salles face criticism in Brazil and abroad because of their calls to develop the Amazon as fires and deforestation rise in the region. The prospect of a halt to the environment ministry's protective efforts in the Amazon and the ecologically important Pantanal wetlands sparked criticism from environmental advocates and Mourão, who was appointed by Bolsonaro as the coordinator of a military-led effort to fight illegal burning and unauthorized development in the Amazon.

Mourão told reporters in Brasilia, Brazil's capital, that no operations would be stopped despite Salles’ statement.

“Let us hope he thinks it over and comes to the conclusion that he did not take the best line of action,” the vice president said.

Bolsonaro put the army in charge of protecting the rainforest in May, following international demands for action after a string of massive wildfires in the Amazon.

Instead, The Associated Press has found, the operation dubbed “Green Brazil 2” has had the opposite effect. Under military command, Brazil’s once-effective but recently declining investigation and prosecution of rainforest destruction by ranchers, farmers and miners came to a virtual halt, even as this year’s burning season picked up.

The Brazilian army appears to be focusing on dozens of small road-and-bridge-building projects that allow exports to flow faster to ports and ease access to protected areas, opening the rainforest to further exploitation. In the meantime, there have been no major raids against illegal activity since Bolsonaro required military approval for them several months ago, according to public officials, reporting from the area and interviews with nine current and former members of Brazil’s environmental enforcement agency.