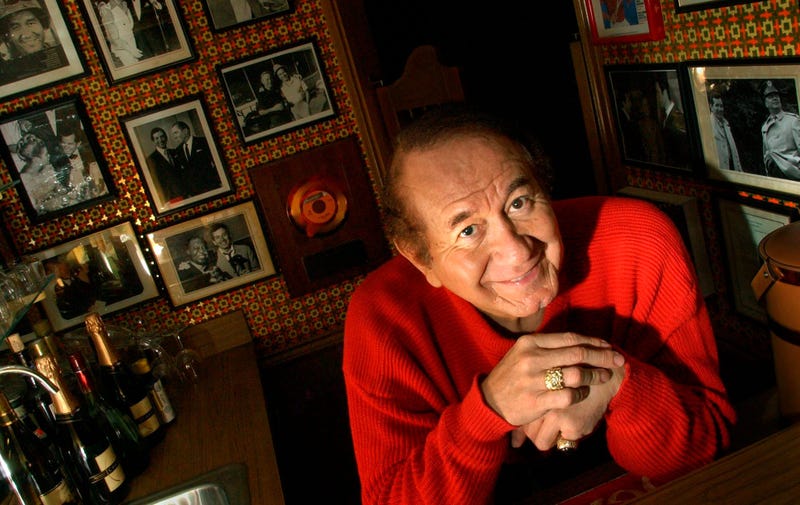 Photo credit FILE - In this Jan. 1, 2002 file photo, singer and actor Trini Lopez poses in Dallas. Trini Lopez, a singer and guitarist who gained fame for his versions of “Lemon Tree” and “If I Had a Hammer” in the 1960s and took his talents to Hollywood, has died. He was 83. Filmmaker P. David Ebersole confirmed that Lopez died Tuesday, Aug. 11, 2020 at Desert Regional Medical Center in Palm Springs, Calif., from COVID-19. (Cheryl Diaz Meyer/The Dallas Morning News via AP)
By The Associated Press

RIO RANCHO, N.M. (AP) — Trini Lopez, a singer and guitarist who gained fame for his versions of “Lemon Tree” and “If I Had a Hammer” in the 1960s and took his talents to Hollywood, died Tuesday. He was 83.

Business partner and musician Joe Chavira said he and Lopez just finished recording a song “If By Now,” a tune meant to raise money for food banks during COVID-19. “And here he is dying of something of something he was trying to fight,” Chavira said.

Mentored by Buddy Holly and Frank Sinatra, Lopez became an international star while performing in English and Spanish. Unlike Mexican American singers such as Ritchie Valens, Lopez rejected advice to change his name and openly embraced his Mexican American heritage despite warnings it would hurt his career.

His life changed after his father bought him a $12 black Gibson acoustic guitar from a pawn shop. His father taught him how to play the instrument, which led the young Lopez to perform at Dallas nightclubs that didn’t allow Mexican American patrons.

Buddy Holly saw Lopez at a small nightclub in Wichita Falls, Texas, and introduced him to Norman Petty, his record producer in Clovis, New Mexico. Holly died in a plane crash six months later, and Lopez briefly replaced him as lead singer of The Crickets.

Lopez moved to Southern California and got a regular gig at P.J.’s Night Club in West Hollywood. Sinatra saw him perform and offered him a contract with his new record label, Reprise, where Lopez got his first major hit with “If I Had A Hammer.” It went to No. 1 in nearly 40 countries.

They became friends and were spotted together regularly in social circles in Las Vegas and Palm Springs, California.

His debut album, “Trini Lopez at PJ’s,” reached the top 10 in 1963, and he had success in the Spanish-language market with “The Latin Album” and “The Second Latin Album.” The rare Latino in the rock and folk world of the time, he would speak often of resisting pressure from record executives to change his name and presumably appeal more to white audiences.

Lopez received a Grammy nomination for best new artist of 1963 and by early 1964 he was so in demand that he and The Beatles were co-headliners during a month-long engagement at the Olympia Theatre in Paris. It was just before the British band would travel to the U.S., appear on “The Ed Sullivan Show” and upend the careers of Lopez and countless others.

“The French newspapers would say ‘Bravo Trini Lopez! Who are The Beatles?’” Lopez later told the web site www.classicbands.com. “When we finished doing the shows, the last night we were there, reporters came to my dressing room. My dressing room was next to theirs and they said ‘Mr. Lopez, The Beatles are leaving tomorrow for New York. Do you think they’ll be a hit?’ I said ‘I don’t think so.’”

“Trini used to say he came to California, broke and in a station wagon. He'd thanked Sinatra for ‘discovering him’,” Chavira said. “Sinatra said, 'no, it was meant to be.”

He later helped develop a string of original Gibson Trini Lopez signature guitars from 1964 to 1971. Lopez also appeared in the film classic “The Dirty Dozen” and the comedy “The Phynx.”

Ebersole and Hughes recently finished shooting a documentary on Lopez called “My Name is Lopez,” which is due to be released in 2021.

Associated Press writer Russell Contreras is a member of the AP’s Race and Ethnicity Team. Follow Contreras on Twitter at http://twitter.com/russcontreras