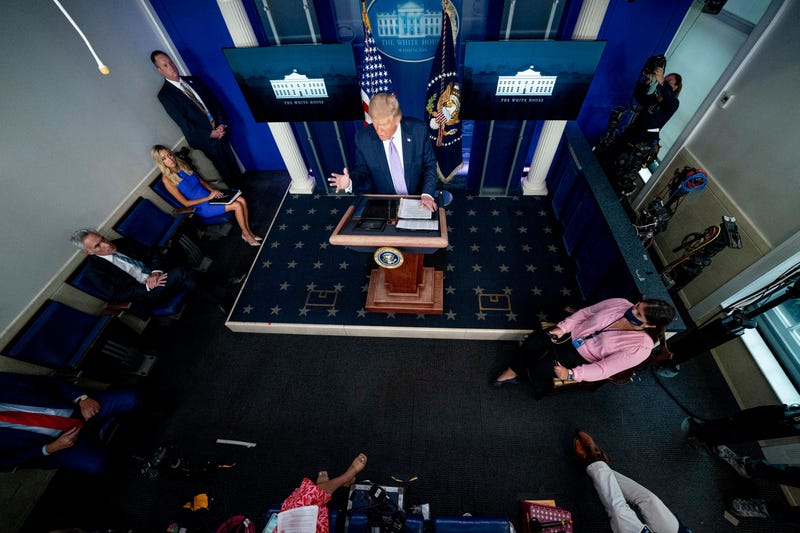 WASHINGTON (AP) — President Donald Trump on Thursday gave credence to a false and racist conspiracy about Kamala Harris’ eligibility to be president, fueling an online misinformation campaign that parallels the one he used to power his rise into politics.

Speaking from the White House, Trump told reporters he had “heard” rumors that Harris, a Black woman and U.S.-born citizen whose parents were immigrants, does not meet the requirement to serve in the White House. The president said he considered the rumors “very serious.”

The conspiracy is false. Harris, who was tapped this week by Joe Biden to serve as his running mate on the Democratic ticket, was born in Oakland, California, and is eligible to be president under the constitutional requirements. The question is not even considered complex, according to lawyers who have reviewed her circumstances.

“Full stop, end of story, period, exclamation point,” said Jessica Levinson, a professor at Loyola Law School. “Let’s just be honest about what it is: It’s just a racist trope we trot out when we have a candidate of color whose parents were not citizens.”

Trump built his political career on questioning a political opponent’s legitimacy. He was a high-profile force behind the so-called “birther movement” — the lie that questioned whether President Barack Obama, the nation’s first Black president, was eligible to serve. Only after mounting pressure during his 2016 campaign did Trump disavow the claims.

Trump comments about Harris on Thursday landed in a blizzard of other untrue, racist or sexist claims unleashed across social media and conservative websites after Biden picked Harris, the first Black woman and the first Asian American woman on a major party ticket. The misinformation campaign is built on falsehoods that have circulating less noticeably for months, propelled by Trump and his supporters.