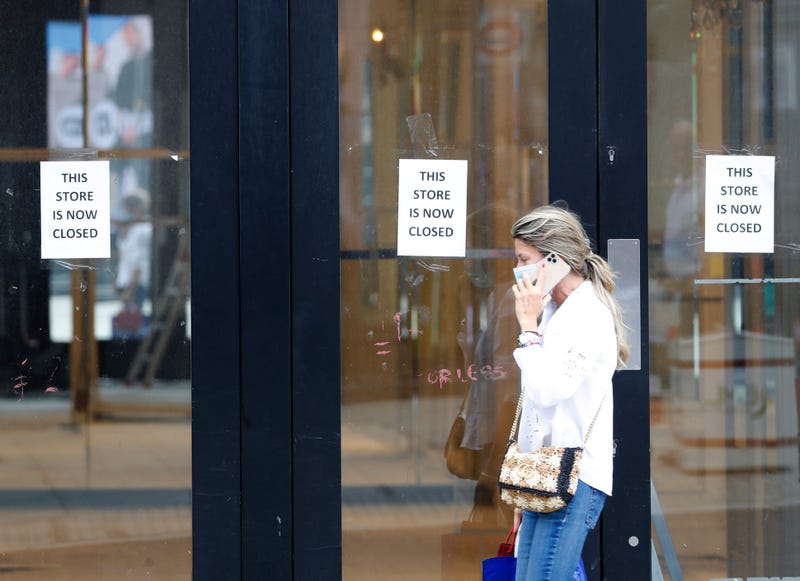 Photo credit A woman walks by a closed store, in London, Thursday, July 16, 2020. Unemployment across the U.K. has held steady during the coronavirus lockdown as a result of a government salary support scheme, but there are clear signals emerging that job losses will skyrocket over coming months. The Office for National Statistics said Thursday there were 649,000 fewer people, or 2.2%, on payroll in June when compared with March when the lockdown restrictions were imposed. (AP Photo/Alastair Grant)

LONDON (AP) — The U.K. has kept a lid on unemployment so far during the coronavirus pandemic but, scratch beneath the surface, there are worrying trends that will likely see the jobless total soaring by the end of the year.

Figures released Tuesday from the Office for National Statistics showed that the number of people working fell in the April-June quarter by the most since the global financial crisis more than a decade go, though the unemployment rate held steady at a historically low 3.9% in June. To be classified as unemployed, workers need to be actively looking for a job. Many have yet to do so.

The stable jobless rate is largely due to a government salary support scheme that will end in October, a cliff-edge moment that many economists think will lead to an almost immediate doubling in unemployment. The number of people officially labeled as unemployed could rise to over 3 million, a level not seen since the 1980s.

Under the Coronavirus Job Retention Scheme, the government has been paying a large chunk of the salaries of workers retained rather than fired. Some 1.2 million employers have taken advantage of the program during the lockdown to furlough 9.6 million people at a cost to the government of 33.8 billion pounds ($44 billion).

Though these employees have not been working, they are not counted as unemployed. The government has started phasing out the furlough program, with firms now having to cover some of the costs of the plan. The government has said it will end the program in October on the grounds it gives “false hope” to furloughed workers while at the same time limiting their prospects of getting new jobs as their skills fade.

While admitting that not every job can be saved, Treasury chief Rishi Sunak said Tuesday's figures said the support measures, have helped to “safeguard millions of jobs and livelihoods that could otherwise have been lost.”

The big question is how many of those furloughed workers will be kept on payroll after October as many parts of the economy are still operating way below potential. It’s a tough call for firms facing a historic cash crunch following one of the deepest economic slumps ever recorded in the U.K.

“A wide range of indicators suggest that job losses will crystallize from August, when employers must start to cover some of the costs of furloughed staff,” said Samuel Tombs, chief U.K. economist at Pantheon Macroeconomics.

In a sign of the weakness of the U.K.'s labor market, employment fell in the April to June quarter by 220,000, its biggest three-month decline since the 2009 recession. Figures due for release on Wednesday are set to show the economy contracted by nearly 25% in the second quarter of the year from the previous three-month period.

The statistics agency also reported that the number of people on payroll in the U.K. fell 81,000 in July to 28.27 million. The number of people coming off the payroll since March is now 730,000, with the falls in employment greatest among younger and older workers.

The number of firms cutting jobs has accelerated in the past month or two with big companies like British Airways and Rolls Royce announcing big layoffs. Troubled department store Debenhams said Tuesday it is getting rid of 2,500 jobs.

Unions are urging the government to at least extend the furlough scheme to sectors still suffering from lockdown restrictions.