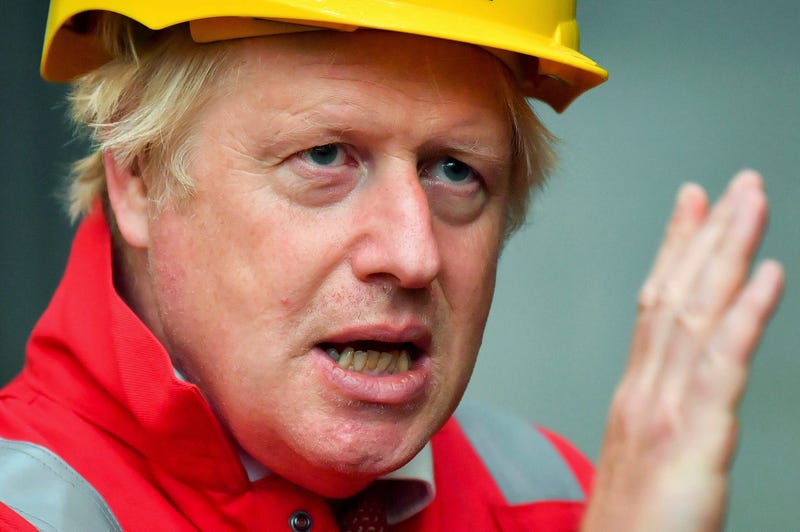 LONDON (AP) — The British government came under renewed pressure Tuesday to recommend that high school students in England should wear face masks, at least in communal areas such as hallways, after the advice in Scotland was changed.

Prime Minister Boris Johnson said his government was ready to follow suit and advise a change in certain situations if the medical evidence supports face masks are necessary in containing the spread of the coronavirus.

“On the issue of whether or not to wear masks in some contexts, you know, we’ll look at the changing medical evidence as we go on,” he told reporters while on a visit to a shipyard in Devon in southwest England. “If we need to change the advice, then of course we will.”

For now, the advice of the British government, which oversees schools in England, is that face masks aren't necessary. It points to a recent report from Public Health England that showed very few virus infections during the partial reopening of schools for younger students in June.

The government's main focus at the moment is trying to reassure nervous parents that their children will be safe when they return to school.

The evidence from around the world is that children face less severe virus symptoms than do adults, with the elderly the most vulnerable to severe infection and death. However, they can be sources of transmission and governments around the world are grappling about how school reopenings will affect the virus' spread within families and in the wider community.

“In the absence of clarity, given the known detrimental impact of school closures, we must err on the side of caution in order to ensure that when schools reopen, they remain open," said Dr. David Strain, a clinical senior lecturer at the University of Exeter.

England's nearly 25,000 schools are due to reopen over the coming couple of weeks, and Johnson's Conservative government is focused on making sure the return goes smoothly following the recent exam grades fiasco. The furor, which eventually saw the government ditch a controversial algorithm used to determine results after exams were cancelled as a result of the pandemic, claimed its first casualty Tuesday with the resignation of Sally Collier, head of the exams regulator Ofqual.

Within the U.K., which has the highest virus-related death toll at nearly 42,000, Scottish schools reopened first, followed by those in Northern Ireland. Schools in England are Wales are due to reopen in September.

Two weeks on from the reopening of schools in Scotland, one school in the city of Dundee has already had to close following an outbreak, a development that appears to have been at the heart of the change in face mask advice.

The Scottish government confirmed Tuesday it was giving “obligatory guidance” to students age 12 and above to wear face coverings when they are moving around schools starting Monday. It said individual exemptions could be granted for health reasons and that children of all ages should wear masks on school buses.

The change of advice in Scotland came a day after the World Health Organization said children between the ages of 12 to 18 should wear them just like adults should — notably in cases where physical distancing cannot be ensured and in areas of high transmission.

“It is right we reflect that in our guidance,” Scottish First Minister Nicola Sturgeon said.

Scotland has often led the way within the U.K. during the pandemic on the wider use of face coverings. It, for example, mandated their use in shops after they reopened a couple of weeks before England. The Welsh government also said that it was considering a change of policy for high schools in Wales.