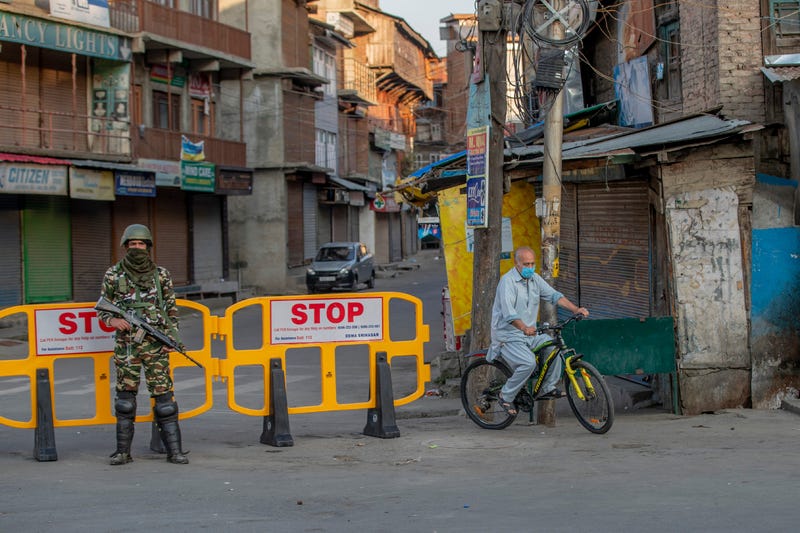 Photo credit A Kashmiri cycles past a barricade set up as road blockade as a paramilitary soldier stands guard on the first anniversary of India’s decision to revoke the disputed region’s semi-autonomy, in Srinagar, Indian controlled Kashmir, Wednesday, Aug. 5, 2020. Last year on Aug. 5, India’s Hindu-nationalist-led government of Prime Minister Narendra Modi stripped Jammu-Kashmir of its statehood and divided it into two federally governed territories. Late Tuesday, authorities lifted a curfew in Srinagar but said restrictions on public movement, transport and commercial activities would continue because of the coronavirus pandemic. (AP Photo/ Dar Yasin)

SRINAGAR, India (AP) — Authorities enforced security restrictions in many parts of Indian-controlled Kashmir on Wednesday, a year after New Delhi revoked the disputed region’s semi-autonomy in a decision that set off anger and economic ruin amid a harsh security clampdown.

Officials lifted a curfew in the restive region’s main city of Srinagar late Tuesday, but said restrictions on public movement, transport and commercial activities would continue because of the coronavirus pandemic.

Government forces placed steel barricades and razor wire across many roads, bridges and intersections. Shops and businesses remained shut and police and soldiers stopped residents at checkpoints, only letting an occasional vehicle or pedestrian pass.

Several residents said government forces stopped them at checkpoints, saying the curfew was still in place.

“You call it a curfew or virus lockdown, the fact is that we’re under a brutal siege and this siege is a year old now,” said Ishfaq Ahmed, a Srinagar resident.

The region was also split into two federal territories — Ladakh and Jammu-Kashmir. Following the move, Indian authorities enforced an information blackout and a security clampdown in Kashmir for months. Thousands of Kashmiri youths and pro-independence leaders, as well as pro-India Kashmiri politicians, were arrested. Hundreds are still incarcerated.

As some of the restrictions were eased, India enforced another harsh lockdown to combat the spread of the coronavirus, deepening the economic crisis in the region.

In Ladakh’s Muslim-majority Kargil district, where people have resented India’s move, religious and political groups demanded revocation of the order, calling Aug. 5 a “black day.” Businesses and shops remained closed in most of the district.

China on Wednesday called India's action in Kashmir “illegal" and said it hoped Pakistan and India would resolve their differences through dialogue.

“China pays great attention to the situation in Kashmir,” Chinese foreign ministry spokesperson Wang Wenbin said at daily briefing in Beijing. “Any unilateral change of the status quo in the Kashmir region is illegal and invalid.”

India's foreign ministry responded late Wednesday, saying China has no standing in the matter "and is advised not to comment on the internal affairs of other nations.”

Chinese and Indian soldiers are locked in a military standoff along their disputed border in Ladakh region since May. During one confrontation on June 15, 20 Indian soldiers were killed and dozens wounded when the two nations' soldiers fought hand to hand.

“Pakistan will always be with its brothers and sisters” in Indian-controlled Kashmir, Khan said in a statement.

On Tuesday, Khan unveiled a new map of Pakistan that includes Indian-held Kashmir and Junagadh, part of the western Indian state of Gujrat, within the Muslim-majority country’s boundaries for the first time in 70 years. India rejected the move as “an exercise in political absurdity.”

On Wednesday, Pakistan’s military accused Indian troops of targeting civilians in a border village in Pakistan-controlled Kashmir, killing a teenage girl and wounding six others. In a statement, it said a combination of mortars and heavy fire hit the village of Hot Spring, and Pakistani troops retaliated.

While most Kashmiris were confined to their homes Wednesday, over a dozen activists from Modi’s Hindu-nationalist governing party assembled in Srinagar to celebrate the scrapping of region’s special status.

“Today we’re celebrating because ever since Bharatiya Janata Party came into being its slogan always has been one constitution, one leader and one flag. That has been completed,” said Altaf Thakur, the party’s regional spokesman.

Authorities barred some pro-India Kashmiri leaders who have opposed the decision from meeting in Srinagar.

“BJP displaying its hypocrisy. They can gather & celebrate,” tweeted Omar Abdullah, the region’s former top elected official who was released after about eight months in detention. “The rest of us can’t even meet to discuss what’s happening” in the region, he said.

In Pakistan, several anti-India rallies were organized to denounce last year’s changes by India. In the capital, Islamabad, President Arif Alvi addressed a rally and sought a solution to the Kashmir issue under 1948 U.N. resolutions.

The status of Kashmir has been a key point of dispute between Pakistan and India since the two split after the end of British colonial rule. They each control part of Kashmir and have fought two wars over their rival claims.

Initially, the anti-India movement in the Indian-controlled portion of Kashmir was largely peaceful, but after a series of political blunders, broken promises and a crackdown on dissent, Kashmiris launched a full-blown armed revolt in 1989.

“If India will not take any genuine and immediate steps to resolve the situation, meet their obligations to investigate historic and recent cases of human rights violations and prevent future violations, then the international community should step up,” they said in a statement.