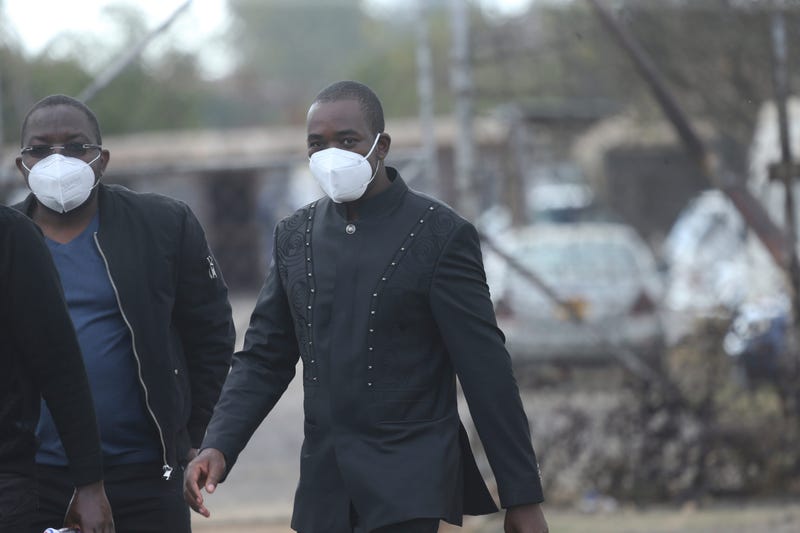 HARARE, Zimbabwe (AP) — Zimbabwe’s president, calling the main opposition party “terrorist,” vowed to flush out opponents in an ongoing clampdown in which scores of opposition members and government critics have been arrested and rights groups allege security forces have carried out illegal abductions and torture.

President Emmerson Mnangagwa described critics as “dark forces,” and “a few bad apples” that should be “overcome," in an address on state television Tuesday.

The arrests started last week when the military and police thwarted an anti-government protest and Mnangagwa indicated that they will continue.

“We will overcome attempts at the destabilization of our society by a few rogue Zimbabweans acting in league with foreign detractors,” he said, warning that “bad apples who have attempted to divide our people and to weaken our systems will be flushed out. ... Enough is enough.”

Mnangagwa made the speech as local and international pressure mounted on his administration over the allegations of human rights abuses.

The hashtag #Zimbabweanlivesmatter has been used in social media to draw attention to the wave of arrests.

Security agents deployed in the capital, Harare, and other major cities last week to foil the protest planned for Friday, resulting in empty streets that day. Some people who tweeted in support of the demonstrations or tried to hold low key protests were arrested, and some were assaulted and tortured, according to human rights groups and Tendai Biti, spokesman for the main opposition party, the Movement for Democratic Change Alliance.

Investigative journalist Hopewell Chin'ono has been in jail for two weeks after he posted on social media in support of the anti-government demonstration and made a series of allegations of government corruption. Chin'ono awaits a bail hearing this week on charges of allegedly encouraging violence.

“Clearly we must do something about what is happening. ... It is time that we take care of Zimbabwean lives that matter ... We must be serious about the situation,” said Chamisa, leader of the MDC Alliance, after visiting Chin’ono and Jacob Ngarivhume, an official of the opposition party who had helped to organize the foiled protests, who is also jailed.

“They are in high spirits and they really want to see a better country,” said Chamisa of the two jailed men.

Other arrests include internationally known author Tsitsi Dangarambga who was held in police cells overnight last week after staging a small protest. Journalist Mduduzi Mathuthu and several members of the MDC Alliance are in hiding.

In his speech, Mnangagwa, who rights groups accuse of using COVID-19 as a cover to clamp down on dissent, said Zimbabwe's security forces would not relent.

“Security services will carry out their duties with appropriate astuteness and resolve. The protection of the right to life is paramount, especially in light of the COVID-19 pandemic and machinations by the destructive terrorist opposition groupings,” he said.

Tensions are rising in the southern African country as the economy implodes. Inflation is more than 700%, the second-highest in the world, while the World Food Program has projected that 60% of the population could be food insecure by the end of the year.

The pandemic has brought a new layer of suffering. In public hospitals, doctors and nurses are frequently on strike and infrastructure is so dilapidated that “unborn children and mothers are dying daily,” according to the Zimbabwe Society of Obstetricians and Gynecologists.